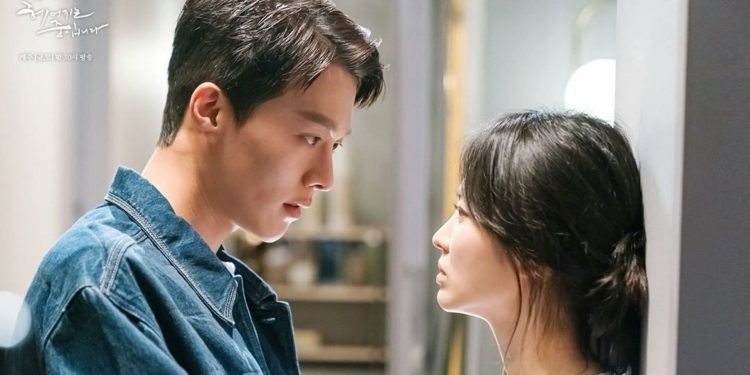 After taking us on an emotional roller coaster for months, ‘Now We’re Breaking Up’ has finally gotten its ending. And after many ups and downs, Jae Guk and Young Eun took their final decision and broke up. Finally breaking up, they moved on with their lives. As pulling the two lovers apart wasn’t really helping either of them. Their friends and family, too, decided to focus on themselves. Keeping up with the show ever since it started, fans have had a mixed reaction to the ending of ‘Now We’re Breaking Up.’ While some are already done with the story of two lovers so madly in love with each other, some are hoping for a season two already.

Asking Young Eun one more time about joining him in Paris and leaving everything behind, Jae Guk wanted to tell her that he would always love her, even when they were miles away. But no matter how badly she wanted to go with him to start a new life. Watching her mother wanting to live for herself helped Young Eun make the decision she was dreading to make. After rejecting Olivier’s job offer in Paris, CEO Hwang gave her the complete authority of SONO. But going through so many different outlooks of life in a span of two months, Young Eun had other plans to work on.

The ending of ‘Now We’re Breaking Up’ has definitely brought tears to the viewers’ eyes. Let it be Mi Sook preparing to say goodbye to her family and friends as she succumbed to her illness. Or let it be Young Eun and her mother understanding the importance of having a life of their own. And not to forget the way Seok Do Hoon handles the relationship problems with maturity. All the characters in the k-drama have been amazing in their own ways. Here is a look at how things went for them as the show finally ended.

Having the option to stay at ‘The One’ or make ‘SONO’ her own brand, Young Eun went on to choose neither of the options. Deciding to experiment and put out all the designs, she never let out. Young Eun submitted her resignation. Thanking her whole team, she told them to take good care of SONO. A few weeks after her departure, Chi Hyung and So Young also followed her. Having difficulties in the start, the three went on to work together on Young Eun’s new brand, ‘HWA’. While Jae Guk moved to Paris, working as a photographer, and had no contact with people back in Korea. But a call from Busan Fashion Week made him leave all his current work and come to the event.

What Happened To Hwang Chi Sook and Seok Do Hoon?

Throughout the show, Chi Sook has had some crazy character development. From being an insecure person coming from a rich family. Chi Sook finally understood the responsibilities she had to take on. She’s a better friend now and, moreover, a better leader at the company. One of the main reasons behind this transformation is Seok Do Hoon, the CEO of Vision PR, and her boyfriend. The two went through many ups and downs. At one moment, Do Hoon was avoiding Chi Sook, and the other moment she was trying to use him for business. But eventually, the two fell in love. Chi Sook’s ex Jimmy came in between them, telling Chi Sook that Do Hoon is using her and her father is giving his company the projects so he’ll stay with her.

After almost ruining her relationship and confronting Do Hoon and her father, Chi Sook got to know that all of it was a misunderstanding. As she cried over their breakup in front of Do Hoon’s building, he came to tell her that they never actually broke up. Skipping to a year later, Chi Sook and Do Hoon are living together. As her father asked them to marry each other, they both stood up to their believes that they’d marry soon once they got ahold of each other’s lifestyle.

What Happened To Mi Sook and Soo Ho?

In the start, things weren’t good between Soo Ho and Mi Sook. While Soo Ho had an affair in the office, Mi Sook was alone at home taking care of the house and their daughter. Thinking that she might be pregnant, Mi Sook went to the doctor and got to know that she had cancer. She tried to keep it a secret, but soon her friends and Soo Ho got to know about it. Feeling guilty about his behavior, Soo Ho apologized and decided to give his job up and take care of his wife. But Mi Sook decided to skip the treatment and asked him and her friends to give her a farewell party.

Also Read: Kdrama Of The Day: ‘Warm and Cozy’: Review, Cast and Ending

She even tried to make things good with Min Kyung, the colleague her husband had an affair with. With her days being numbered, Mi Sook lived her life to the fullest. But looking at her daughter Ji Min, there were too many things that she needed to do. After coughing up blood one day and a trip to the hospital, Mi Sook slept cuddling with Soo Ho for the last time and never woke up. Leaving behind everything she could so her daughter won’t have to go through the trouble. Soo Ho, too learned to adapt to living alone and taking care of his daughter, and especially respecting and loving his wife that he never did all the years.

The Family Moved On Too…

Young Eun’s mother wanting a divorce came as a shock to everyone. But as we moved, we got to know her side of the story, and the things made sense. After apologizing to his wife, Young Eun’s father went to Young Eun’s house. Telling her that even though he has said goodbye to hundreds of his students every day, letting his wife go is hard for him. And in the end, it was hard for him. He signed the papers for his wife’s happiness. Moving out of their house for her comfort; and being concerned for her, was the only thing his wife wanted him to do all their time together.

On the other side, Jae Guk’s mother too moved on, knowing that she’ll only hurt herself and her son if she interferes in his life. Telling him that she will always be there for Jae Guk if he comes back home, she too went her way. While Yoo Jung is still in love with Yoon Soo Wan, knowing that she was very much involved in Yoon Soo Wan’s accident ten years ago, she still hasn’t been able to move on from him. And looking at his picture every night, she still waits for him to come back.

‘Now We’re Breaking Up’ Ending: Is There Going To Be A Season 2?

While it’s too early to talk about a new season, there are no chances that ‘Now We’re Breaking Up’ will have a season 2. ‘Now We’re Breaking Up’ focused on not one but many stories together. Other than Jae Guk and Young Eun, her parents and friends had a huge role in the show. The show had an open ending as we saw Jae Guk returning to South Korea while Young Eun started her own brand was running to places to get her big start. The two ran into each other at the same place they first met, Busan Fashion Week. Taking a full circle, the story ended at the same place where it started. And the only thing different was that the two now had an idea what they were going to get themselves into.

Where To Watch ‘Now We’re Breaking Up’?

‘Now We’re Breaking Up’ is available to watch on the streaming platforms Rakuten Viki and Viu.

Lee Chaeyeon Now Officialy Has Her Own TikTok Account