‘Not Me’: Episode Schedule, Plot & Cast

'Not Me' is a suspense thriller tale of twin brothers White and Black. Whereas one gets hurt, the other decides to bring justice and punish the culprit! 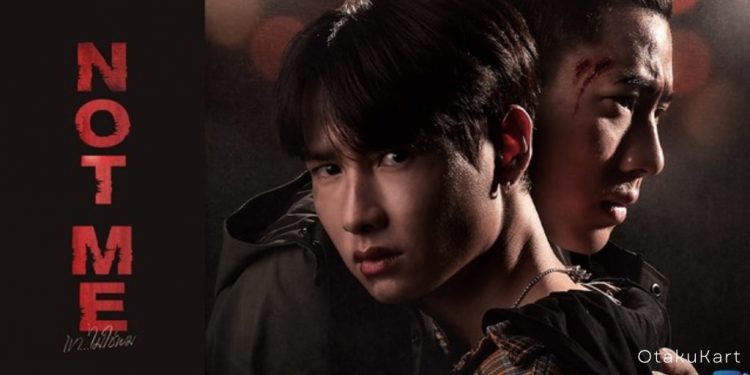 The newly released Thai series ‘Not Me’ has caught viewers’ attention with its intense action-thriller plotline. Not to forget, one of the famous Thai BL couples ‘Off-Gun’ is making a comeback on the screen with their sparkling chemistry! Previously the two had worked together in Senior Secret Love: Puppy Honey, Our Skyy, Theory of Love, etc. However, all those previous series were more of romantic and comedy genre, very light-hearted. However, Not Me is an absolutely different piece, filled with a mind-blowing plot, strong characters, and a whole package of action stunts! Therefore, fans should look forward to this new series.

The Thai series ‘Not Me’ is written by Noolek Sureechey Kaewses, Rittikrai Kanjanawiphu, and directed by Nuchie Anucha Boonyawatana, starring Gun Atthaphan Phunsawat and Off Jumpol Adulkittiporn. It is the tale of twin brothers who get separated after their parents’ divorce. However, the special bond between the two never ceases. Therefore, one gets hurt, the other also feels the pain. Finally, the twins meet after ten years of separation, only to find one brother on a hospital bed, in a critical condition. How will the other twin bring justice? Find out the twisted tale of twins who are ready to take down the whole world for each other!

The thriller action that series ‘Not Me’ is a Boys Love (BL) drama revolves around twin brothers, White and Black, who possess a strong twin connection. However, after their parents’ divorce, the brothers split, living far away from one another. Whereas White left the country to live with his father in Russia, Black stays in Thailand with his mother. After a decade, White and his father return to Thailand.

One day, White suddenly feels immense pains as if someone has broken his bones to death. Even after recovering, the doctor couldn’t find the cause of the pain. Later he received a call from Todd, his childhood friend. He informs White about Black’s critical condition after falling into a coma. Seeing his brother beaten to death, White decides to disguise himself as Black to root out the trailer, one of Black’s motorbike gang members- Sean, Gram, and Yok.

However, it seems White does not know his brother as well as he thought. His unusual behavior is caught by Sean, and he begins suspecting White. Little by little, the difference makes Sean feel things he should not. How will White overcome this upcoming obstacle? Or will he become another victim of a vicious fight while acting as Black?

‘Not Me’ Thai series was premiered on 12 December 2021 at 8.30 pm ICT on GMM25. Since the series depicts the lives of twin brothers White and Black, each episode will reveal new secrets and twists, leading viewers closer to the culprit. GMM25 has been scheduled the drama for 14 Episodes, and all episodes will broadcast for 45 minutes. Not Me has taken the Sunday time slot, creating viewers’ weekend full of thriller suspense rides! However, note that changes may happen due to various reasons, such as technical issues or other emergencies. So, here is the Not Me episode schedule as per GMM25 time slot-

Meet The Stunning Cast Of Not Me Thai Series

The series has starred various famous actors such as Gun Atthaphan as White/Black, Off Jumpol as Sean as main leads. The supporting cast members include Mond Tanutchai as Gram, First Kanaphan as Yok, Fluke Gawin as Don, and Sing Harit as Todd. We will also see Papang Phromphiriya, Film Rachanun, Lookjun Bhasidi, Chokchai Charoensuk, Dujdao Vadhanapakorn and many more. While revealing little secrets about the culprit, the story will narrate a love struggle between White and Sean, who are bound to each other. Thus, don’t forget to watch and see how this tale unfolds in the ‘Not Me’ Thai series!

Why Did Eris Leave Rudeus in Mushoku Tensei: Jobless Reincarnation?