After their parents' divorce, the twin brothers, White and Black, split. Years later, White meets his twin only to find him on a hospital bed, beaten to death. White will take over Black's role to bring justice to his brother. 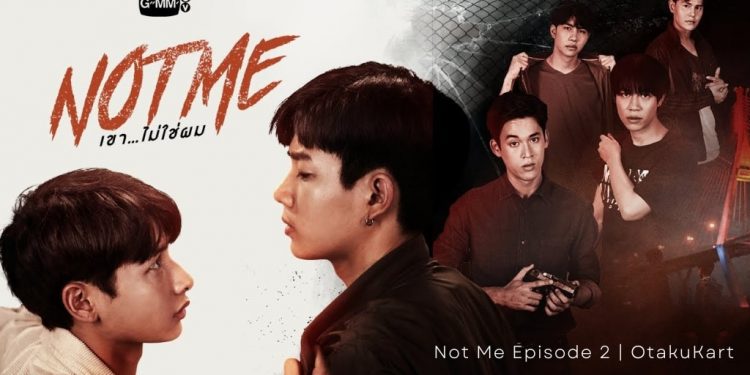 Not Me Thai Series

Not Me Episode 2 is coming this weekend! The Thai series has picked up its pace from the first episode, moving on with the main plotline. The latest shows small fragments of the twin brothers White and Black’s childhood part. Due to their parents’ split, the boys get no choice but to live separately, away from each other. It’s heartbreaking to see them falling apart when they clearly hold each other closer than anyone else. Maybe it is the magic of their twin bond! When one hurts or feels pain, the other also goes through the same intensity, like two bodies with one soul!

The first episode reveals a little bit of their childhood part. Although the twins possess different personalities, both boys are close to each other. When one goes through hardship, the other feels the pain of it. Therefore after divorce, their parents decide to separate them. Whereas White goes with his father to Russia, Black stays with his mother in Thailand. During those 10 years of separation, both grow up under different circumstances. It also weakens their twin bond. However, as soon as White returns to Thailand, their bond, once again, strengthens. Therefore, Not Me Episode 3 will narrate the tale of a nong (younger brother) who is willing to risk anything to bring justice for his phee (older brother).

Ep 1 of Not Me unveils the twin brothers White and Black’s childhood. After their parents split, White goes with their father and Black stays with their mother. 10 years pass, but the brotherly bond between them never ceases. All those years, White misses his other half. Therefore, after returning to Thailand, the first thing he asks about is Black’s whereabouts. Unfortunately, his father had not contacted their mother after their divorce since she left them for someone else. Hence, his father does not know his twin brother’s whereabouts.

During a meet-up, White suddenly gets immense body pain to the point it becomes difficult for him to breathe. Even the doctor does not find any complications. Later, he discovers that his twin brother, Black, has gone into a coma. Due to fierce fighting, White felt all the pain Black went through. After learning from their childhood friend, Todd, about Black’s current lifestyle. White decides to take his place and find the culprit who has beaten his brother to death!

For that, White gets tattoos, several ring piercings, and whatnot. And one by one, he eventually encounters Black’s biker gang members Gram, Yok, and Sean. After meeting them, he tries to find some clue at their garage, only to become part of their horrendous crime to durn down Tawi’s house! Find out how White will overcome this new obstacle in Not Me Episode 2!

Not Me Episode 2 Release Date & Spoiler

Not Me Episode 2 will be released on 19 December 2021 at 8.30 pm ICT on GMM25. The first episode has given a glimpse of how different White and Black’s lives have been until now. Both have grown up in entirely different environments. Now that White is back and has found that his brother Black is in a coma, he will do anything to catch the real culprit. For that purpose, his acting as Black may end up landing him in danger!

White Learns The Severity Of This Dangerous Game

The preview of Not Me Episode 2 is already out! It shows the bikers’ gang will continue their mission to attack Tawi’s house. However, the plan will not be complete due to one’s mistake, and that one is none other than White, who has taken his brother Black’s position. It clearly shows that White and Black are entirely different people even though they are twins. However, the innocent White does not know the real face of his twin brother Black!

It also shows their fire attack plan flops as they find someone inside Tawi’s house. Of course, they are ruthless, young-hot blood. However, their intention is not to kill anyone but only to scare Tawi off. Therefore after knowing someone’s inside the house, they all get agitated. This time, even White seems to back off after seeing how far the gang goes for their mere stunt! He even tells them he is quitting! Will he really be able to leave the squad? How will Sean react to this? Find out how this action BL leads in the upcoming Not Me Episode 2!

Thai viewers can watch the drama on GMM25 at 8.30 pm ICT. Simultaneously, it will also stream in AIS PLAY. The series is also the streaming platform iWantTFC which is available only in the Philippines. As for global viewers, Not Me is available on GMM25’s official YouTube Channel with English Subtitles.

Will Miyuki & Kaguya Break Up In Kaguya-Sama: Love Is War Chapter 248?