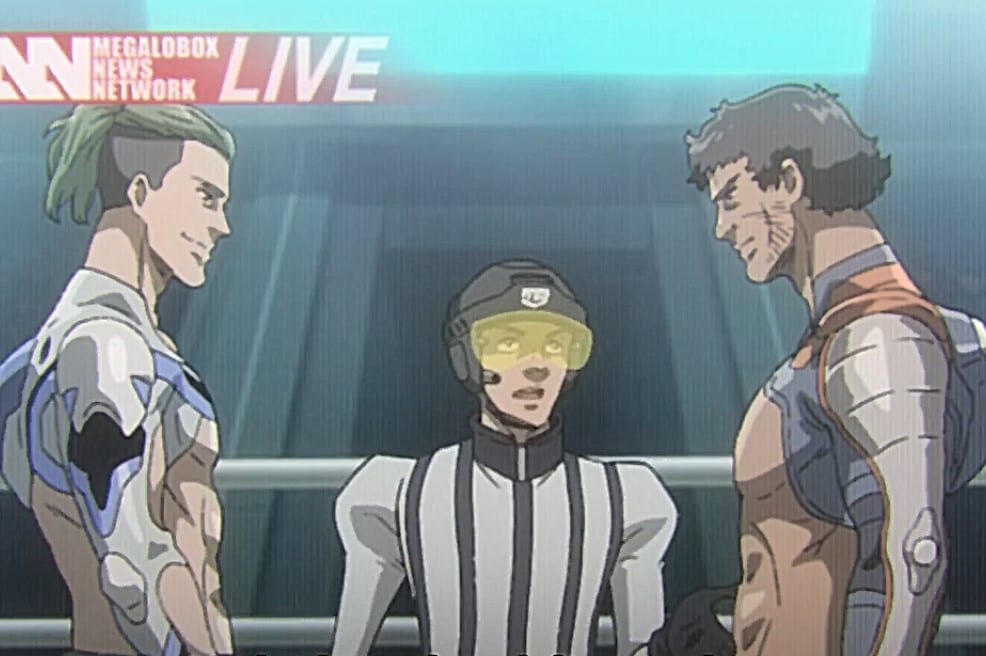 The boxing match between Mac and Liu is about to begin after; Nomad decided to be a sparring partner of Liu. Inside the arena, Mac notice that Nomad is sitting on Liu’s corner and realizes that Liu and Mac are partners. The commentators notice that Mac is staring at the old-time boxer, Gearless Joe (Nomad). Sachio asks Nomad if he knows Mac. Nomad replies that he has never met that guy in his life.  Lui is entering the ring under the guidance of Yuri, who was once called the King of Kings.

The commenters reveal that Liu has defeated Gearless Joe and made his vibrant debut. Lui continues to break records after Gearless Joe’s retirement and climb his way to the top as the second Megalonia champion.  He has earned himself the name King of Kings and placing first in the IMA ranking. Lui comes from Jimmy’s Megalobox Gym. It is the Here Sons of Rosco vs. King of King Edison Liu. The match will decide who will stand out at the top of the Megalo-Boxing world. The two boxers square off in the middle of the ring.

Mac’s partner thinks Mac will get an easy victory and offer Mac’s t-shirt to Yukiko and Asamoto. Sachio wonders who will win between Lui and Mac. Nomad notice that Mac’s fighting stance is familiar with Chief’s fighting stance. Mac is entering the ring as the underdog. Liu is at the A-side due to his speed and technique. Round 1 begins with both fighters countering with jabs. Nomad notices that Mac is fast, and he throws heavy blows that are shaking Liu.

The massive punches pushed Liu to the rope, and he is trapped. Mac landed a right hook that knocks Lui down. Sachio is surprised that the champion is down. He told the guy near him that Liu is fine and he has just lost balance. Lui gets up at the count of seven. The fans shout that it is Mac’s Time and told the champ to stop running. Lui has not landed a single blow, and he is defending to maintain his balance. The first round ended with Mac’s overwhelming power dominating Lui.

The guy cheering for Mac comments that Mac is the best. The commentators reveal that Mac is facing off against the champion equipped with the Gear controlled by the lates brain chip created by ROSCO. But Lui has lightened up his Gear. The second commentator reveals that Liu is using fewer parts to expand his range of motion, allowing him more flexibility and various attacks. But Liu’s defense is weaker. 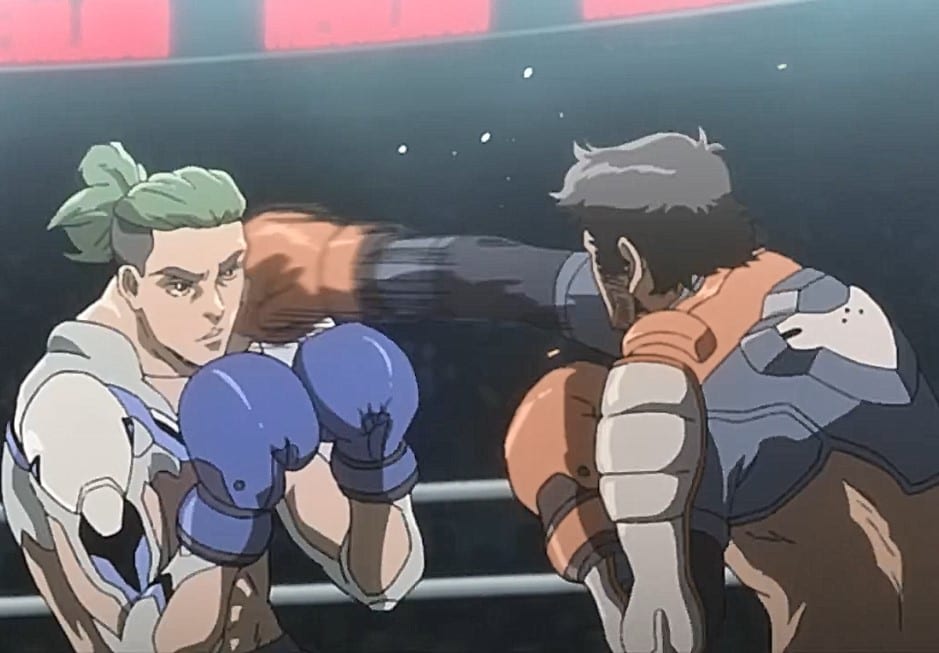 At Liu’s corner, they help him recover from that first-round KO and give him advice for round two. But Mac is losing his gas since he wants to get the job done quickly. Liu told Yuri that Mac’s punches are heavy, but they are not that hard. Yuri told Liu that they made the right choice by choosing this Gear for him. Round two begins with Mac rushing in. Mac swings and misses, but he ends up receiving a body blow. Nomad told Sachio that Lui would win this match.

He has noticed that Mac is out of gas, and he is missing most of his punches. Nomad reveals that Liu reads all of Mac’s movements in the first round to make Mac pay in the second round. Liu started to land heavy blows mixing them with jabs, right hook, and left hooks. Lui landed a blow that cuts Mac’s forehead, and blood started pouring. He landed a body blow that made Mac loses his mouthpiece as he falls to the ground. Mac gets up at the count of nine.

But he can’s stand his ground as he is trying to survive the second round. Nomad wonders why Liu is not taking Mac down, and Sachio comments that Lui is careful about Mac Time. Mac got knocked down in the third round and survive in the count of nine. Mac came back strong fast and show Lui that it is Mac Time and landed a blow that puts Lui to sleep. Nomad is surprised that Liu got KO’d, and they took Lui to the hospital. Lui has suffered his first loss in his boxing career. Mac couldn’t afford to lose in front of his wife and kids.