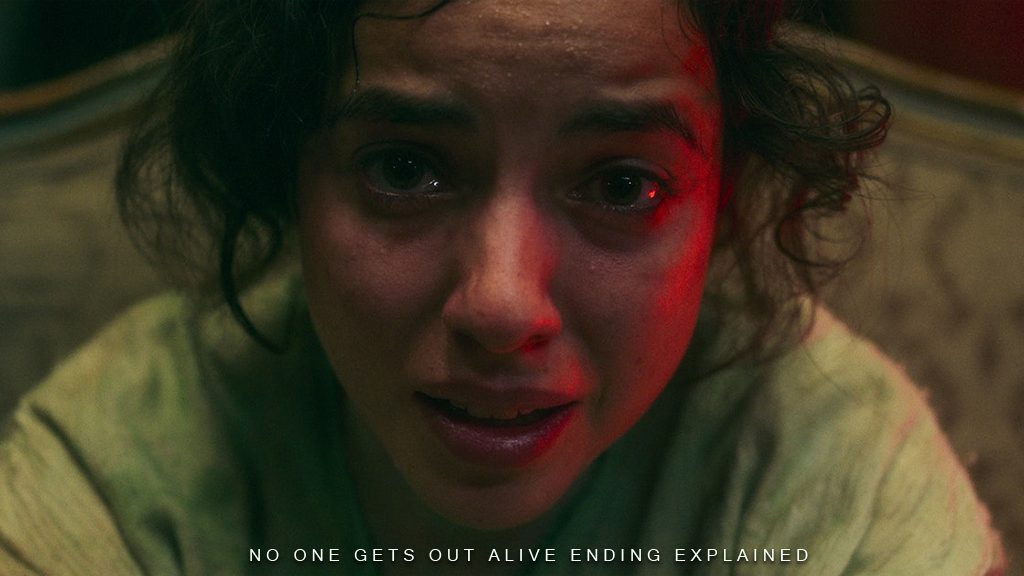 No One Gets Out Alive

Let’s take a little dip into the genre of horror movies to get the “No One Gets Out Alive” ending explained along with the plot. People love to watch horror movies full of jump scares and creepy soundtracks and especially at night. After all horror movie is one of the best ways to get some adrenaline rush. Santiago Menghini directed this 2021 Netflix horror movie, no One Gets Out Alive. Everyone is talking about this movie because it just came out on 29 September 2021. Further, it features Cristina Rodlo and Marc Menchaca in the lead roles.

This horror movie is the adaptation of Adam Nevill’s 2014 horror novel with the same name. This movie presents the struggles of poverty along with supernatural satanic events. Further, the movie takes the plot a level higher than the book and adds the troubles of being an immigrant. The audience and critics praised the movie for its cinematography and the actor’s performance. However, like most horror movies, this movie also leaves the audience in a bit of confusion. In this article, we will get the No One Gets Out Alive ending explained. Therefore, this article will contain spoilers, so it would be better to watch the movie prior to reading this.

What happens in No One Gets Out Alive?

The story revolves around an illegal Mexican immigrant, Ambar, who moved to America after her mother’s death. She could never enjoy her life back in Mexico because of her ill mother. Therefore, she plans to start a new life in America. She works in a clothing factory and looks for a low-budget place. Further, a place where she doesn’t require documents, as she doesn’t have legal documents with her. 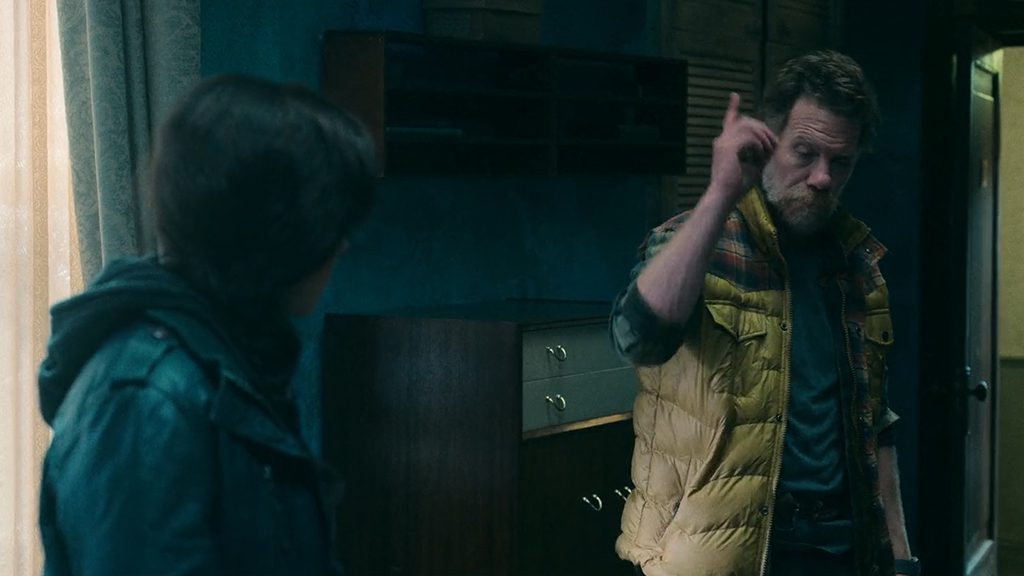 Ambar and Red meet for the first time.

One day, Ambar comes across a low-budget place only for women, and also, she doesn’t require presenting any ID proof to live here. Ambar then goes to that place and pays the first month’s rent to Red, the owner of that place. However, she experiences supernatural events happening in the house soon after her moving in. Akbar sees a woman’s shadow and her mother’s ghost. Further, she could hear women screaming and shouting for help. Ambar goes to meet with a distant cousin, Beto, who offers to help her. He also finds her a good job, but she will require an ID. Therefore, she gives her remaining money to her coworker, who promised to help her get an ID with that money. However, she cons Ambar and runs away with the money.

Now, Ambar doesn’t want to go back to that house, calls Red, and asks to return the deposit. Ambar and Red meet at a cafe, but Red says he doesn’t have money with him, and it is at his place. Therefore, she travels back to the boarding house with Red but couldn’t find any money. Instead, Red and his elder brother, Becker, lock her with two other girls in a room. Beto comes for Ambar but gets killed by Becker. Then Red explains how his father was an archaeologist and got that box. Further, they began sacrificing women to that box and, in exchange, the box healed his sick elder brother, Becker. 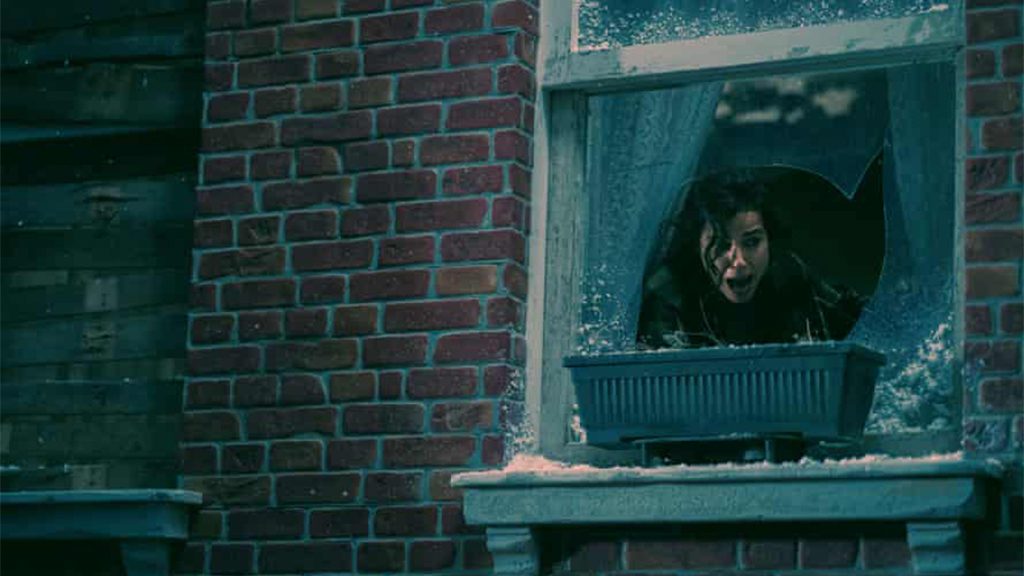 Soon Becker arrives and takes them to another room and place Ambar on a table in front of a stone box. Ambar soon sees her mother in a dream. Meanwhile, a monster comes out of the box to devour Ambar’s head, but her waking up sends the monster back into the box. When Red and Becker come back to check, Ambar attacks Red and injures him. Then, with the help of another victim, Ambar attacks Becker. She finally kills Becker, but the other woman dies. Then Ambar leaves injured Red on the table, and then the monster eats Red’s head. While leaving the boarding house, her injuries got healed, and Red’s ghost appeared behind her.

What happened at No One Gets Out Alive ending?

The stone box is an ancient Aztec artifact, and there are speculations that the monster inside is the Aztec goddess Itzpapalotl. The ritual Red and Becker were doing might be a pagan ritual. Where sacrificing a human pleases the goddess and, in return, she heals the one performing the ritual. Further, it seems the goddess manipulates the one practicing the ritual to offer more sacrifices for power. Red even told Ambar after sacrificing their father and mother to the stone box, Becker got healed, and then red wanted to quit, but not Becker. Then in the end, when we saw the monster healing Ambar and when the camera zooms near her, it felt like she’s now connected to that creature somehow. 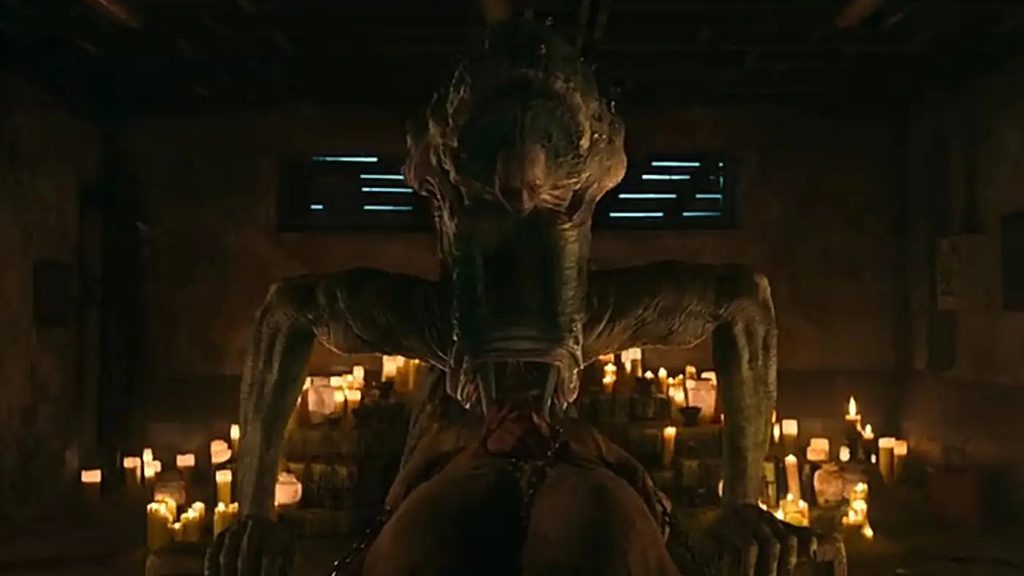 The Monster from the stone box.

Then Ambar’s seeing her mother and then killing her also got the fans confused. Also, why the monster didn’t eat Ambar after she kills her mother in the dream. It seems Ambar was guilty of not being able to save her mother. Even after leaving Mexico to start a new life in America, she can’t get over her mother’s passing away. Further, the stone only feeds on people who have guilt, and because Ambar overcame the guilt, the monster left her. But she consumed Red’s head because he might be guilty of killing all these women.

Will the story continue?

No One Gets Out Alive ending is an open-end where we can expect Ambar to leave the house forever and never come back. However, we can also expect a sequel if the stone box influences Ambar. Then she might take Red and Becker’s place and sacrifice humans for the powers the monster will give her. At the moment, it doesn’t seem like there would be any sequel. Therefore, there is no need to think much about a sequel. But you can watch this horror movie again for some adrenaline rush.

In this article:Ending, Explained, No One Gets Out Alive