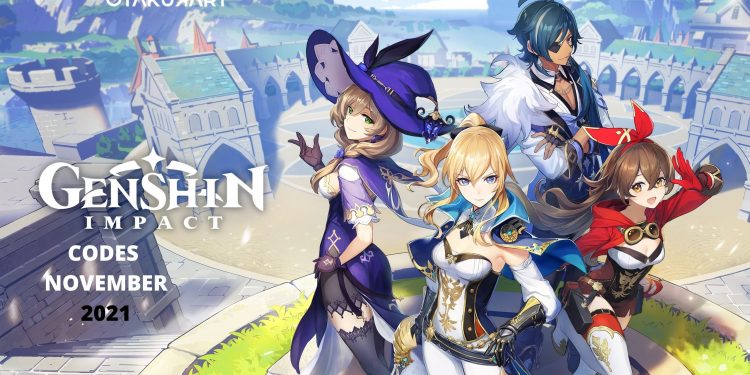 Are you searching for new Genshin Impact Codes? Well, you are at the right place. The new code for November 2021 is now live and available for all. Genshin Impact is an action RPG game that has given all its authority to miHoYo. Now, they allow their players to collect a code and redeem some of the rewards for the game. Some Primogems are the currency of the game, just like other games. Reasonably, this currency is expensive and hard to earn if a player wants it by playing the game.

So, many players wait for the code to arrive every month that helps them to redeem some of the currency and rewards for the game. Also, if anyone wants to have mora and primogems without doing anything, then he can add them by paying some amount to the game. But, if you have the code, then there’s nothing to worry about; just make sure that it isn’t expired. Now, Read on to know the new Genshin Impact Codes and how to redeem them.

What are the New Genshin Impact Codes for November 2021?

There are three New Genshin Impact Codes that were working. These codes are revealed from the miHoYo’s end every month, so a Genshin Impact player must follow their official channel where they post these codes.

Now the codes that are active are

Codes generally are for a limited time period, so redeem the codes and enjoy the rewards, but if you are late on this article and these codes are not working, then you must wait. Stick to the official channel of Genshin Impact because they publish codes on the live stream. November’s codes were out on the special event of ‘2.3 live stream code’, and the next month’s or next codes will be out on 2.4 Livestream, special event.

In this 2.3 Livestream code, miHoYo revealed the code, AS7CJDP4NG7H, and some new updated characters in this special event, but the above-mentioned code is expired now. It was out two weeks ago, and the expiry date of the code was 12th November 2021 at 11 PM.

How to Redeem Rewards by using the Codes in Genshin Impact?

Codes can provide you with exciting rewards without any problems. you just need to find the working ones. Well, here is a guide that will lead to the rewards. A player can redeem the codes in two ways like if someone is having a problem while redeeming it within the game, then they can reach the website. Also, to redeem the codes, the players must be on adventure rank 10 or more; otherwise, no codes are for the less rank. So, how to redeem rewards using the Genshin impact codes through the website and through mobile?

The website which we are talking about is the website of Genshin especially for redeeming these codes.

Now, if the code is active, then you will get your rewards in your mail. So, to check that, you need to go back to the game.

You can also redeem the codes in the game itself. For this, you must open the game on your phone.

If your code will be working, then it will show you ‘Redemption Complete‘. After that, you will receive your rewards in your Mailbox.

Natasha Hunt’s Boyfriend: Who is the Rugby Star Dating In 2021?