Dragon Ball Super has returned! The original series, Dragon Ball Z holds precious memories of kids and adults. Fans were reluctant at first when a sequel was announced. But, most of them eventually started showering Dragon Ball Super with the same love. The first season of the anime series ran from 2015 to 2018 and was based on Akira Toriyama’s manga by the same name. Shortly afterward, the Dragon Ball Super: Broly was released. There was an uproar of hype during the release of season 1 and the movie. Two years later, another Dragon Ball Super movie has been announced. The confirmation of the news has come from Toriyama himself.

The series follows a retelling of the events of the preceding movies. Its source manga has covered some major arcs since the last movie. We are brought face to face with many of our favorite Saiyans again. Fans were probably expecting another season but that might not happen soon given that Toriyama has yet to encase more material in the manga. However, there seems to be just enough material for a new movie. Given that the announcement was fairly recent, there has not been much detail about it. But the very fact the movie is a confirmed event is enough to let the Dragon Ball fandom dive into the hype.

Fans have been craving for more DBS content ever since it ended. The new announcement was indeed bliss. We have compiled every detail we could find about the upcoming Dragon Ball Super movie. Here’s everything you need to know about the movie and more!

The Dragon Ball Super movie is under making. It was announced on May 9, 2021. The announcement was first published on the official Dragon Ball Super website. Alongside the news, there was a quick comment from Toriyama about the upcoming movie that further confirmed its authenticity. He stated that the movie is currently in the making and that he will be profoundly involved with it. As expected, he cannot let in too much information about the movie but he did say that the movie will be very entertaining and there will be an intervention of an “unexpected” character.

Since the announcement has been made, it probably won’t be long before a promotional video and other details are released too. What we know so far is that movie is set to release in 2022. Toei Animation too came forward to speak about the upcoming movie. They have indicated that the planning of the movie had begun in 2018, before the release of Dragon Ball Super Broly. Toriyama has crafted the story himself to give Dragon Ball fans a mind-boggling experience. The movie is going to be unlike any other, says Toei Animation.

Toriyama’s involvement might mean the movie will stick by the manga. However, given how unpredictable Toriyama can be at times, this might also not be true. The 2018 movie, Dragon Ball Super Broly was not involved in the manga. The movie was not entirely original either. In the manga, there is no specific arc centering around the Broly Saga. Instead, you might find mild references to the Battle’s End And Aftermath in some panels. 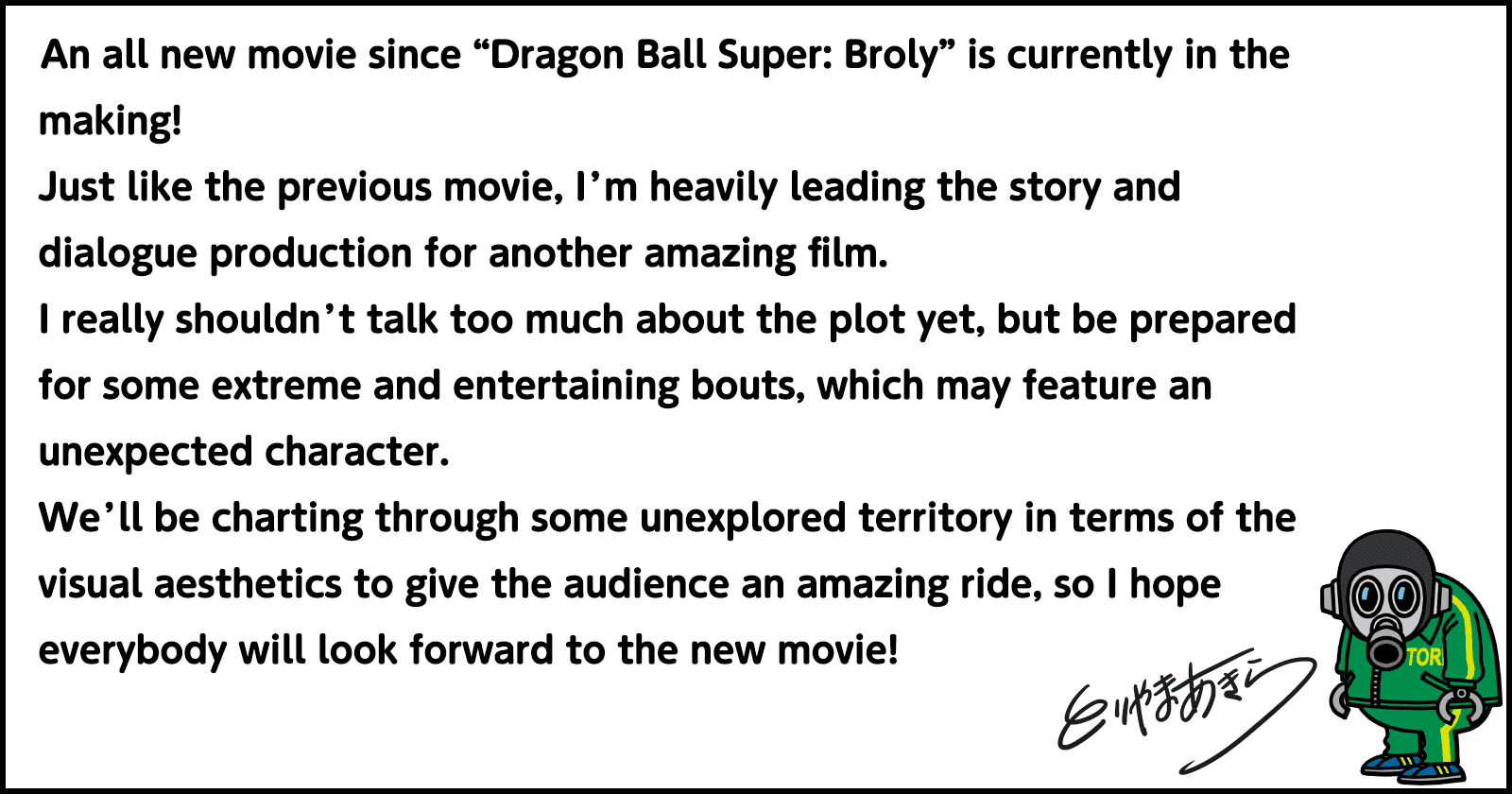 However, if Toei Animation is going to continue the plot, the most obvious arc that the movie will cover could be the Galactic Prisoner Arc. But then again, the Galactic Prisoner Arc is the longest arc of the series covering 25 chapters including the special. It feels a bit rushed to imagine all the plots in a single movie. Additionally, Toriyama has indicated that the movie will feature an “unexpected” character. The detail was too strong to ignore. This character will not be newly introduced but someone who has already appeared before. It strikes quite a chaotic curiosity to wonder who it could be.

Another striking piece of information in Toriyama’s comment was that they will be “charting through some unexplored territory in terms of the visual aesthetics”. This could either mean that they will either be revamping the animation of the show or maybe change the character art.

The hype surrounding the mysterious character was tremendous. Adding improved animation and graphics or character design further explodes the hype of the new Dragon Ball Super movie. Fans are waiting with anticipation for more information regarding this movie in the coming future.

Also Read: Dragon Ball Super: Battle Of The Battles, A Look Back At The Greatest Fights