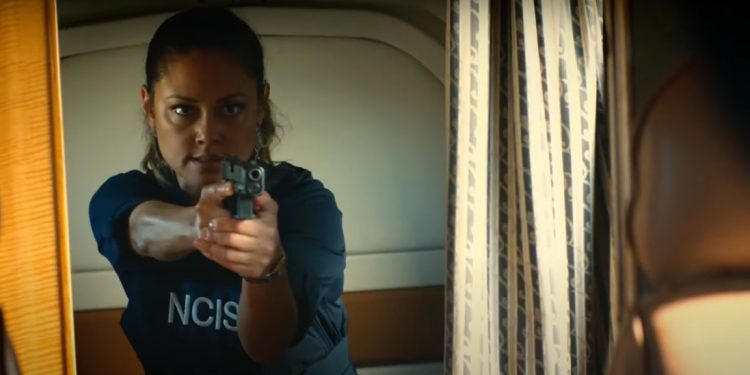 In previous episodes of this Hawaii version of the Naval Crime Investigation Service, the team picked up on the murder of a political activist and a tech mogul with interests in plots of land. In this episode of NCIS Hawaii Season 1 Episode 9, Jane and her team will follow the trail on some World War II bones found right in the middle of the Pearl Harbor bombing anniversary. And they find out that they belong to a living survivor of those events.

This fourth spin-off of NCIS in its debut series located in the Hawaii islands brings together a crew spearheaded by Vanessa Lachey in the role of Jane Tennant. Moreover, the primary framework of “NCIS” remains mostly unchanged in “Hawaii,” in which investigators investigate crimes involving personnel of the United States Navy, this time in Hawaii. The first episode of the new season has all the hallmarks of a traditional “NCIS” episode: dramatic crime, funny NCIS agents, foreign surveillance, heroism, an action set-piece, and a predictable finale.

Where to Watch NCIS Hawaii?

It’s all quite typical and gratifying in the same way that the other series’ simple mysteries are. However, the locale and cast of “Hawaii” distinguish it. Most of the performers are entertaining in their own right. However, Lachey isn’t nearly strong enough of a performer to carry the program, lamely line-reading her way through the majority of the hour. Kai has the most significant potential of the characters since he already has a past and a connection to Hawaii that the others do not. Stories based on the islands have often been chastised for disregarding indigenous culture to exoticize the state and elevate the experience of white inhabitants and visitors. This “NCIS” spin-off isn’t going to change how Hollywood views Hawaii, but it seems to be doing more than simply paying lip respect to local Hawaiians.

Tennant, Special Agent in Charge, was sent in to look for a Jane Doe. The victim was given the name Jane Doe since she lacked identification and her fingerprints couldn’t be read. Tennant and her colleagues, on the other hand, were fortunate in one way. They were able to locate someone who identified the victim. Kathy Laster, the victim, was eventually recognized as a protestor. She was opposing the military’s occupation of Hawaiian territory.

She was a member of World Works, a group of eco-activists that aimed to restore the land to the Hawaiian people. It was a difficult struggle since no one took the gang seriously until they began tossing Molotov cocktails, and even then, they had a difficult time avoiding arrest. So Kathy traveled to Hawaii to join the protest against a tech tycoon buying up sacred/reserved territory.

Kathy demonstrated in front of the billionaire’s mansion. Damien Davenport was the billionaire. Kathy seems to have been out of his home every day for a month, yet neither the billionaire nor his security crew recognized her. Speaking of which, both sides attempted to blame World Works for Kathy’s death. The activists, according to Davenport and his security staff, were fanatics.

They claimed that the group was the true threat, which turned out to be ironic since the squad subsequently discovered the head of security beating someone chained to a chair. According to Tillman, the man collapsed as he broke onto the property. He also said that he was wearing gloves to shield himself from the man who he claimed had just fallen and was bleeding. And Tillman just happened to know that the guy he was “interrogating” was Kathy’s buddy.

The companion was collected by the crew. When they questioned him, he said that he did not injure Kathy. He believes the wealthy man and his staff murdered Kathy. Kathy was about to complain when she abruptly came to a halt. Which is strange given that she was also paid to protest. Kathy was invited to Hawaii by Davenport’s wife. The crew attempted to interrogate Morgan Davenport, but she refused to answer any questions. Her lawyer followed her wherever she went.

Her public character was that of a benevolent individual since she gave away millions of dollars. Morgan, on the other hand, paid a lady to come out to the island and protest against her husband. She got paid before she arrived on the island, so why did she stop? The team has a hypothesis. They believe Morgan paid Kathy to seduce her husband.

Morgan and her spouse had been estranged. She was seen meeting with a divorce attorney, and everyone assumed Morgan recruited her to gain a larger payment in the divorce. What Morgan didn’t expect was Kathy to just quit. The crew obtained paparazzi images and discovered that Davenport was a serial cheater. Morgan was summoned by the team.

They questioned her in front of her lawyer, who reminded Morgan that Davenport still wants to keep his secrets hidden. However, the crew continued to dig. They discovered Kathy was Davenport’s daughter. Davenport has kept a secret kid concealed. He became too close to one of the ladies he works with at his first firm, and she departed six months later, giving birth to Kathy.

Davenport’s kid is Kathy. But he’s unconcerned. Davenport had bribed the mother to keep him out of it because he didn’t want to damage his marriage since there was some overlapping with both Morgan and Kathy’s mothers. Without a DNA test, the mother couldn’t establish Kathy was his. Morgan was the one who gave the DNA test. She genuinely did intend to screw over her husband, and she planned to use the hidden kid to get out of her marriage, but Kathy was murdered for no apparent reason.

Davenport was the most likely suspect. Everyone assumed he murdered his own daughter. Even Kathy’s buddy Mike suspected her father was the murderer, and the team began to fear he was plotting something against Davenport. Davenport’s house was visited by the team. They saw an explosion and realized that Mike had kidnapped both Davenport and his wife.

Mike desired Davenport’s confession. Davenport refused because he claimed he did not murder Kathy, and when his security crew arrived, Tillman shot Mike. Mike was taken to the hospital by Tennant and her crew. They did, however, track out their assassin. Tillman was the assassin. Tillman has been protecting Davenport’s secrets for years, and he has attempted to pay Kathy to leave, but she has refused. So that’s when he murdered her.

Davenport made an attempt to get ahead of the narrative. He requested pity and compassion since he had lost a kid. He’s also going through a divorce, and he’ll most likely be fired from the firm shortly. Meanwhile, Tennant had a date with Millius that went really well, but now he’s being promoted to the Pentagon, so this will be the last time they see each other for a while. With this, we conclude our coverage of NCIS Hawaii here at Otakukart.