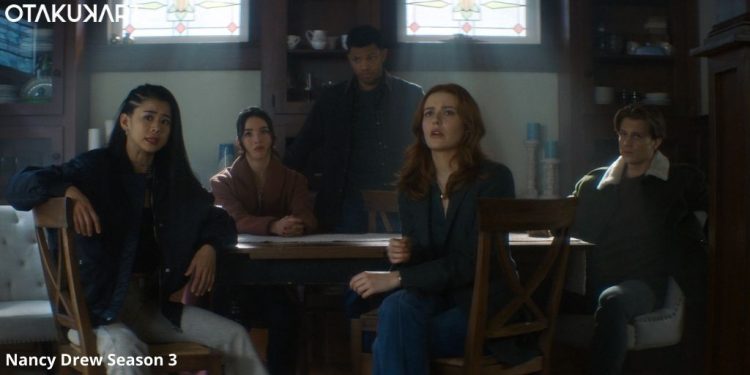 Nancy and his friends will be getting quite close to Temperance’s plan on Nancy Drew Season 3 Episode 12. Meanwhile, the Drew crew faced a big challenge while trying to find out and protect another victim of the Frozen Hearts Killer from dying. On the other hand, the episode gave us a look at Nick attending to his jury duty on a case of petty theft where a teenage kid’s future was on the line. Meanwhile, Carson also tried to get George’s help in getting evidence in favor of the kid after his friend bailed.

Whereas, the vibe seemed a bit off in the team after the breakup of George and Nick. Furthermore, George was feeling empty realizing that she was not Nick’s person anymore. Talking about feelings, Bess was hell-bent on getting Ace to agree to express his feelings to Nancy. While Ace didn’t want to go through with the idea knowing that Ace and Park had their own thing going on. On the other hand, things took a dangerous turn when the Frozen Hearts Killer resurfaced in town.

The mystical television series has been quite popular among the viewers with its added dose of supernatural horror and teen drama. Moreover, a lot of viewers have been hooked on the show considering the series has taken its story from the hit novel series also titled “Nancy Drew”. With its third season nearing the finale, the fans are quite excited to watch Nancy Drew Season 3 Episode 12. However, let us dive into the events of the previous episode to find out what happened.

Episode 11 of Nancy Drew Season 3 dropped on 14th January 2022 titled “The Spellbound Juror”. The episode began with George, Ace, and Bess at the diner trying to figure out a way to find the remaining hosts of Charity’s split souls. Furthermore, Ace came up with a possible theory that people bearing Charity’s soul tend to live longer so it made it a lot easier for them to search for those who lived longer in Horshoe Bay. Whereas, Nick went off to court for his jury duty that turned out to be the case where Carson was defending the accused boy Peter. On the other hand, Nancy learned that Jake was having dreams of the battlefield and acting weird before he died. While Nick found out that the next victim of the Frozen Hearts Killer was on the jury.

Carson called George to get a declaration from Peter’s friend Felix that would help him with the case and she helped out with that. Meanwhile, the case was going out of hand when the prosecution brought up Peter’s old case of laptop theft. Coming back to finding the victim, Nick asked Nancy and Ace to look into a girl from the jury that might be the victim. However, the victim turned out to be a man named Lev who started showing the symptoms of the host of Charity’s soul during the court session and was excused by the judge for speaking in between.

This made it difficult for Nick to protect him as he was staying in a hotel with no internet or phone on the orders of the court. But the Drew crew got him out without anyone noticing and they found Lev. However, the Frozen Hearts Killer arrived there to kill Lev. Although, the team eventually managed to save him as the time went past 11:57, which was the time the killer killed his previous victims. Now that Nancy also knew Temperance was trying to unleash a flood of devastation on the town using Charity’s soul, she put Lev under police custody. On the other hand, Ace took up Bess’ advice and confessed his feelings to Nancy totally shocking her. In the end, we saw Temperance attack Lev and the police constable and put them to sleep.

“Nancy Drew Season 3 Episode 12 will release on 21st January 2022 on The CW at 9 pm ET.” Moreover, the episode will be titled “The Witch Tree Symbol”. The episode will see Nancy and his friends finding out that Temperance put a hex on the children of the youth center. Whereas, Nick will try to keep what Temperance is doing a secret for the safety of the kids.