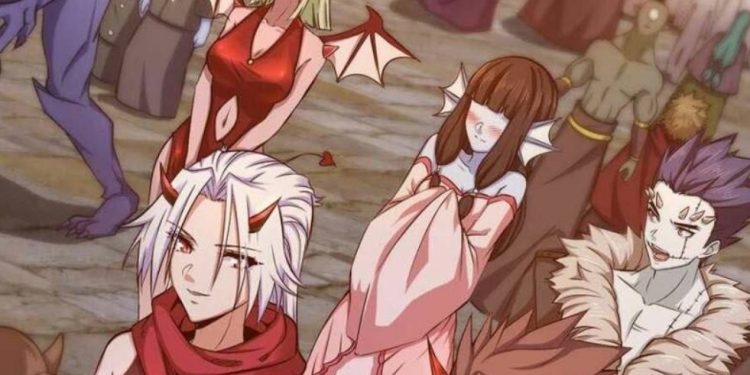 My Wife Is A Demon Queen Chapter 333

Isabella knows that when she reaches the Demon Tribe, she will fight with the current Demon Queen and regain her throne. This has happened after Xiang Ye and Isabella were chased from the human world since the commanders learned that Isabella is the former Demon Queen Isabella realizes that if she takes her throne back, she can fix all the problems she had with humans since they are under the spell of the current Demon Queen. The frog demon told other demons that premium monkey is good for their health if they eat it.

He told tourists passing by to come and see it, then taste it, and decide if they could buy it. The demons gather near him, and he tells them that the premium monkey is a muscle gainer, and once they eat it, their body will strengthen. Xiang Ye, Isabella, Eli, and the others pass by that black market, and Xiang Ye comments that the Demon Tribe is lively. They are disguised as horned demons, and no one suspects that humans have entered the Demon Realm.

Previously on My Wife Is A-Demon-Queen Chapter 333

Xiang Ye wonders if the food in the Demon Tribe is delicious and Eli why he finds them tasty. Eli thought that the Demon Tribe was dangerous, but he noticed that it was the same as the Empire. The students remind them that the Demon Realm has many dead bodies and savagery. Xiang Ye was not watching where he was going, and the giant demon almost stopped his face and said sorry with a wind blowing voice. Xiang Ye told the giant demon that it was okay since he apologized many times.

He realizes that the Demon Realm is peaceful since they don’t pick a fight over anything. Xiang Ye looks up and notices that the Demon Realm has different kinds of strange shapes. The mini demon drops his apple, and Xiang Ye helps him. But Xiang Ye noticed that the demon boy had a chain on his neck and torn clothes, and that boy was dirty. The boy gets worried that his fruit touched the ground. The ugly demon old hag with big red lips told the boy that she was hurrying and he must not delay her.

The boy apologizes, and she pulls the chain towards her. The boy begins to bleed since the chain hurt him; the old had wishes she could have brought a hunting dog instead of a lazy brat. She kicked him, and Xinag Ye caught the boy before getting hurt. He wonders why the boy has a chain and is treated like a slave. Xiang Ye reminds the old hag that the boy is a kid, and the old hag wonders who that guy is who dares question her. She reminds Xiang Ye that she is the boy’s master and can kill him if she wants.

My Wife Is-A-Demon Queen Chapter 333 will be released on 11 January 2022. Isabella reminds the old hag that “Queen Isabella” has stopped that slavery in the past and wonders who told the demons to treat others as slaves. The old hag is not aware that she is talking to Isabella since Isabella is not using her real identity. Let’s look at My Wife Is-A-Demon Queen Chapter 333 official details.

You will be able to read My Wife Is-A-Demon-Queen Chapter 333 online on My Wife Is-A-Demon Queen’s official website. The old hag reminds Isabella that Demon Queen Lilian has put another rule that restores slavery. Isabella realizes that many things have changed since she left the Demon Realm. Isabella wonders if Lilian has destroyed the order she established. Xiang Ye can’t believe that Sophisas’ younger brother lived in the Demon Realm and decided to save that boy.

The student reminds Xiang Ye that their time will come, and they must not forget their purpose. But Eli saves that boy and runway with him. Xiang Ye believes that Eli played an essential role since he planned to rescue the boys. But that boy turns into two slave boys and asks Eli to return them. Let’s meet when My Wife Is-A-Demon Queen Chapter 333 is released.