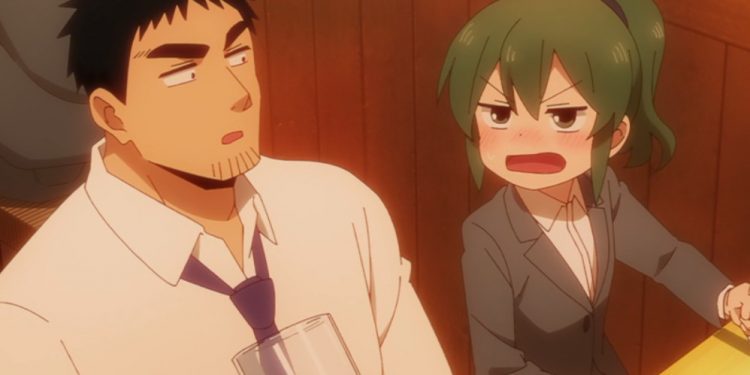 My Senpai is-Annoying Episode 10 reveals the Summer Festival where the workers decided to go to the beach as a team. Futaba wonders why everyone was acting like normal since he talked with Touko at work. She realizes that Touko asked her to join her with her brother; Futaba thought it would be Touko and her brother. Touko reveals that she wanted to surprise Futaba. In the latest episode of My Senpai is Annoying, Harumi tells Futaba to enjoy since they have arrived at the beach.

He heard a girl asking if he was Harumi, and the girl says she has been a friend with Futaba since junior high and her name is Korobe Natsumi. Harumi realizes that Natsumi is the girl that Futaba always tells him about. Futaba noticed that Natsumi was talking too much and wanted to stop her. But Touko told the girls that they could go and wear swimsuits. Souta sets the tent for the girls and waits for them to return. Touko’s brother helped Souta and thanked him for being kind to his sister. Souta looks at him and notices that he resembles Touko.

The girls return wearing a swimsuit, but Souta wonders why Futaba hid. When she arrives, Harumi tells her that she looks cute. Futaba kicks Harumi and Touko asks Souta to join them. Touko noticed that Souta was looking at Natsumi’s chest and asked if he would explain since she wanted to know. Futaba gets excited after seeing the ocean. Harumi challenges her to see who will get inside the water first. Souta and Touko’s brother takes on Natsumi and Touko on volley ball match. Souta decided that he wouldn’t let the bodies of girls destruct him.

Previously on My Senpai is Annoying Episode 9

Souta failed to hit the ball and give away points since he got destruct by Natsumi, who shook her chest. Natsumi praises Touko for making a nice shot, and Touko reveals that she has played volleyball before. Futaba and Harumi enjoy swimming, but Futaba is worried that Harumi is taking her deep inside the ocean. Harumi reveals what he likes about Futaba since she thought he preferred those with a big chest. Natsumi arrives like a shark and scares Futaba, who shouts that she cannot swim. Natsumi tells Futaba to try swimming since she is in the water.

Futaba looks at the other side and notices that Souta is swimming with others. She realizes that she is the only one who is not swimming. Futaba asks Harumi to teach her. Harumi holds her and shows her how her legs have to play inside the water. Natsumi reminds Futaba to put her head inside the water. Harumi noticed that Futaba was scared and told her not to be scared since he held her. Futaba follows all the orders and realizes that swimming is the best.

She managed to swim alone, and they headed to play other games. All the boys miss breaking the watermelon while being blindfolded. But Harumi breaks it using all of his strength and slashes water on everyone around. Futaba says that she knew that Harumi would hit it like that and left with nothing to eat. They also enjoy playing a stone game, and in the evening, they head to the inn. Haruma reveals that she is hungry. The lady from the inn prepares food for them, and they enjoy eating after bath. Natsumi teases Yuto, and Futaba scolds Natsumi. Futaba dish up for everyone.

My Senpai is Annoying Episode 10 will be released on 13 December 2021. Harumi tells the other about Futaba’s food, but Futaba closes his mouth before revealing her secrets. In the evening, they enjoy playing with fireworks. Futaba feels like her grandfather is watching her. They both decide to play jungle games to see who is sacred and find that Futaba is a scared cat after Yuta steps on top of a stick. Let’s look at My Senpai is Annoying Episode 10 official details.

Also Read: Hyunckel and Crocodine’s Execution In Episode 61 of Dragon Quest: The Adventure of Dai.