The newest trailer of the My Hero Academia movie, My Hero Academia: World Heroes Mission dropped a day ago, and are we excited! We thought we could not get any more hyped until the new trailer showed up. There are so many exciting details in every shot. Bones outdid their animation once again. Every shot looks clean and sharp and the graphics just blew our mind. The anime has been winning us with new improvements since five seasons and two movies. Every time a new video drops, we find ourselves with jaws dropped. The same goes for the newest trailer released on 16 June 2021. It was so good that it is difficult to stop myself from writing a complete breakdown of the My Hero Academia Movie 3 trailer. It had action, comedy, phenomenal animation, superb art style, and hyping adrenaline rush. Who won’t fall in love with a trailer like that?

The movie will be released soon. With barely a month left, we are handed down a trailer that speaks for the first-class quality of the movie. Even without watching it, something tells me I am going to be going through a full roller coaster ride of varied emotions. Much like the previous movies, the World Heroes Mission movie too will not be based on the manga story directly. However, the story is still closely supervised and drafted by the original creator of My Hero Academia, Kohei Horikoshi. Given the outstanding quality of the first two movies, there is no way we would be disappointed with his work.

Here is a complete breakdown of the My Hero Academia movie 3 trailer. After all, it is the little hidden details that speak the bigger picture.

Trailer breakdowns are always fun to read and write because we finally get to analyze every little detail in a one and half minute trailer. So this complete breakdown of My Hero Academia movie 3 trailer goes shot by shot so we don’t miss out on anything. Both movie 1 and movie 2 took place outside of U.A High and the same goes for Movie 3 as well. The World Heroes Mission trailer will be taking us to all kinds of places. To know what that means, continue reading this complete breakdown of the My Hero Academia movie 3 trailer.

The trailer begins with a piece of information we already knew. Izuku Midoriya is suspected of committing mass murder and is presumed to be on a run. Then we get a shot of a big city crowded with people where all the billboards show a similar insignia. This insignia is pretty unfamiliar and can be assumed to belong to the antagonist group. It could be a threat or a warning or even a dramatic message to the world. In the next scene, we see a certain chemical weapon gas attack throughout the world. A green gas leaks with effervescence through the sewers. A hero team on standby is contacted.

Next, we see All Might, who is shocked to hear the news about Deku. Next to him stands an unfamiliar face. It could be an old acquaintance of All Might. The outfit resembles a person of high authority. So I am lowkey curious about where All Might is. Especially since his reaction clearly states that he and Deku are not in the same place and he does not know much about the truth either. Then we see a small side view shot of Shoto Todoroki, who too is wondering what is happening. Observing the questions and unawareness of the characters these scenes would probably happen early in the movie.

A View Of The Antagonist

We get a nice view of the antagonists within the first twenty seconds of the trailer. People in white robes stand together surrounding a big statue like a cult. They are chanting ‘Humanity’s Salvation’ in unison. In a quick shot, we see one very horrendous scene. On the foot of the main villain, we see the corpses of many familiar faces from U.A High after a scene that reads ‘The Collapse of “Heroes” Society’. The corpses belong to Uraraka, Yaoyorozu, Tetsutesu, Denki, Tsuyu-chan, Kirishima, Tokoyami, and many more. This could just be a vision but a vague idea of the villain’s motive can be understood, which is probably something like eradicating heroes. 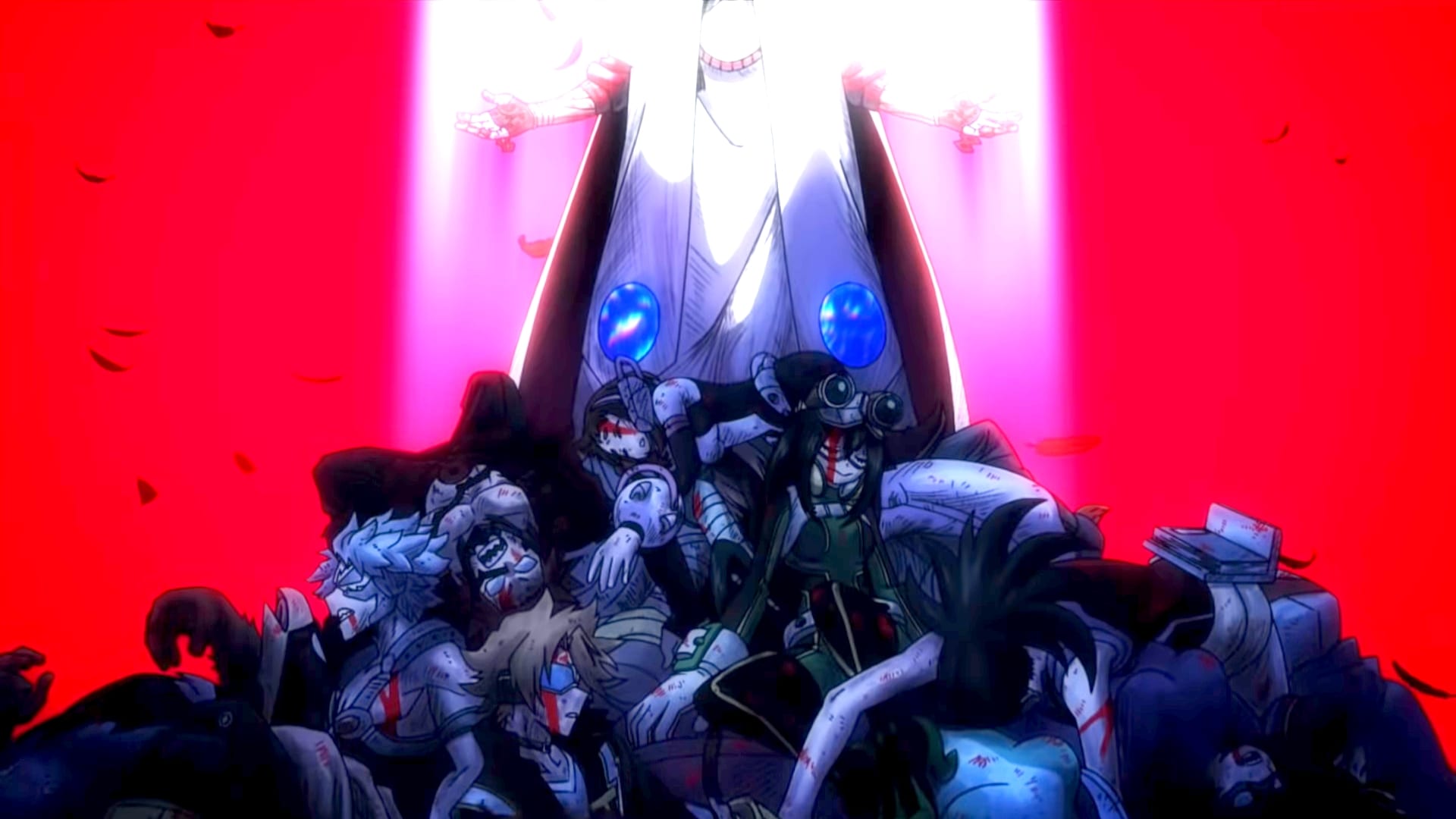 A visual of the characters’ corpses.

This is made further clear in the next shot as we see the villain holding up a book that reads “Quirk Doomsday Theory”. We might know more about it in the movie but clearly, this cult’s basic foundation stands on their beliefs over this theory. In the next scene, we get the first side view face shot of the main antagonist of the World Heroes Mission movie, Flect Turn. The name was revealed a few days back on Twitter and on their official website. The voice actor of Flect Turn is Kazuya Nakai.

The scene then changes to Izuku Midoriya apologizing to someone loudly. Then we get a glance of yet another new character, Rody Soul, who is voiced by Ryo Yoshizawa. He has a cocky face while he tells Deku that they are colleagues. On his back, we see a grey suitcase, something we see a lot in the trailer. Deku and Rody are seen fighting over the suitcase in the next cut scene. That only makes us more curious about the contents in it. In the next scene, we see a peculiar bird. Why is this important? Well, as I said, it is peculiar. It is pink and it wears some of an eyepiece. It does not look like the eyepiece has any lens but any bird wearing something like that cannot be a normal bird. The said bird could be a quirk or a device (likely the former).

In the next scene, Deku carries Rody as he swings past a moving train. This is another scene of importance. Rody is still holding on to the suitcase but at the same time, Deku is swinging on what looks like the Blackwhip as he is attacked by some plasma quirk. Manga readers would know that the Blackwhip is the quirk of the fifth OFA user, Daigoro Banjo. I wonder if the movie will include showing him master the quirk.

The scene immediately changes to Deku, Bakugou, and Todoroki buying groceries. The location looks like a completely different place. It has a bit of a European vibe. We also get a small view of a bridge. The scene changes to a ruined city after an attack. Toxic gases can be clearly seen. The roads are destroyed and wounded civilians are lying all over. One of them is also emitting strange electrical effects after being attacked. The antagonist cult makes another appearance as we hear Shoto’s voice claiming that the Organization’s leader is not human. We see his furious expression next as half of his face is blazing with fire. Shots of Deku and Bakugou can also be seen in the next second, both of them enthusiastic about the situation.

After we see quick glances at the three in their hero costumes, we see a bunch of other heroes. Dragoon Hero Ryukyu is seen with her interns Nejiro, Tsuyu, and Uraraka. Behind them are many other unknown faces. The next scene showed another bunch of heroes but in a different location. Here we see Ibara, Sero, Denki, Mount Lady, Kamui, and many more. However, a Pharaoh dressed hero in the front makes me think this must be somewhere in Egypt. Also, the lighting is very low in this scene and has a very warm effect like it is coming from a flame.

The next bunch of heroes we see is Present Mic, Cementos, Shoji, Jirou, and Fat Gum with his interns Tamaki, Kirishima, and Tetsutetsu. Once again, this a different location. On another location, we see Hawks, Tokoyami, Mashirao, Sato, Shoda, Shishida, and a bunch of other heroes. The last group of heroes contains Yaoyorozu and Setsuna with many unknown faces. 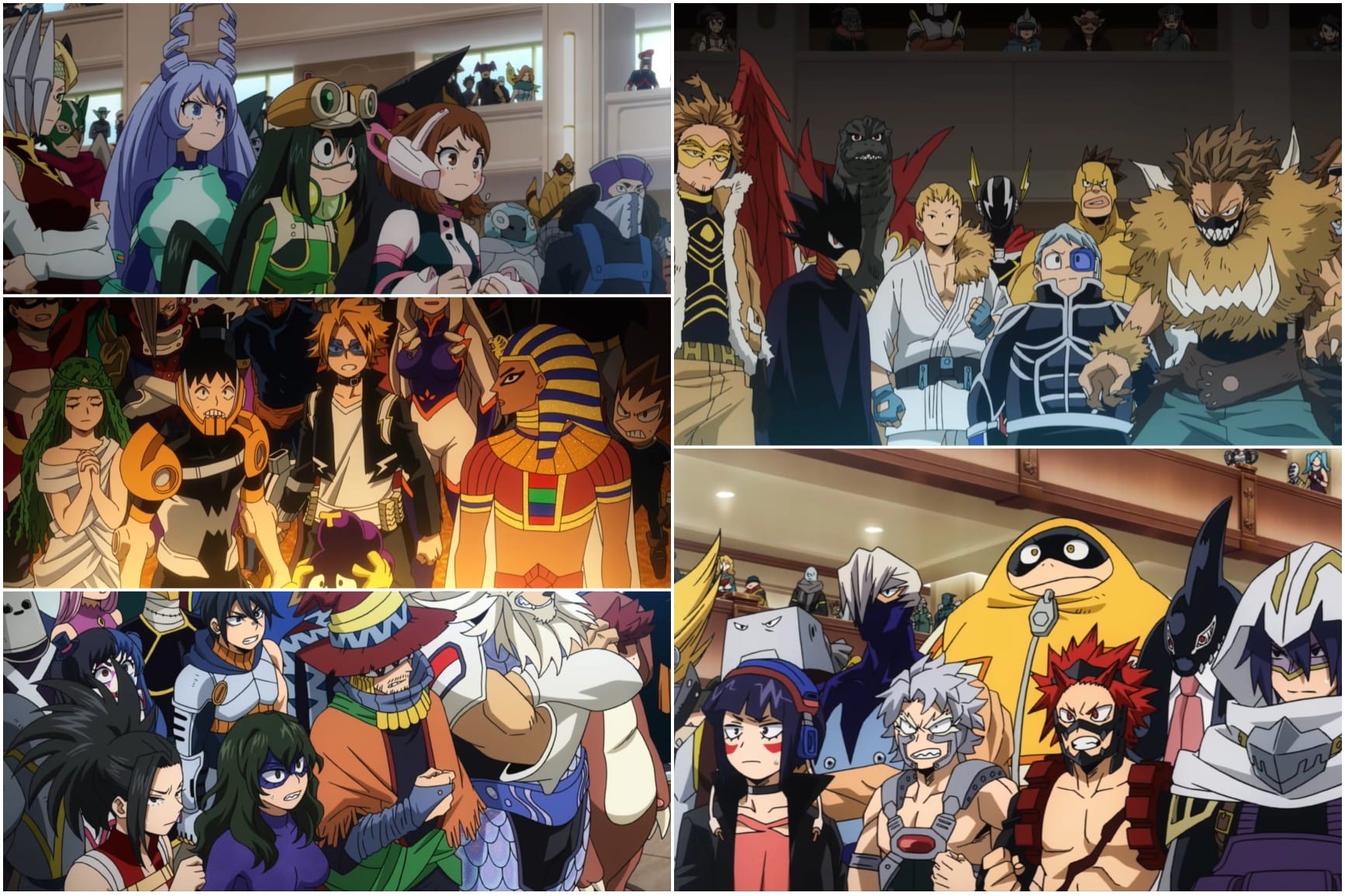 The different groups of heroes.

After a quick scene of Rody looking up at a plane, we see Endeavor in his hell flames. Consecutively we see fighting cut shots of Hawks, Uraraka, Tsuyu, the Flaming Sidekickers, Flect Turn, and an unknown pair on a helicopter. One seems to be shooting from a bow and arrow. Clearly, we will be seeing a lot of new characters on both sides of the fight.

The next scene shows Deku flying in the middle of a rocky nowhere. Additional information on the screen says ‘The Time Limit is Two Hours’. Deku wears a different outfit here, one that we haven’t seen him wear. He wears brown overalls as we watch him use his smash. We see Tamaki next attacking someone with his Takoyaki tentacles followed by Present Mic using his quirk. Random shots feature Dragon Hero Ryukyu, Uraraka, Kirishima, Tokoyami, Denki, Yaoyorozu, Jirou, Shoji, Minata, and Sero, and finally stop at Deku fighting Flect Tern. All the fight scenes seem to be happening in different parts of the world. 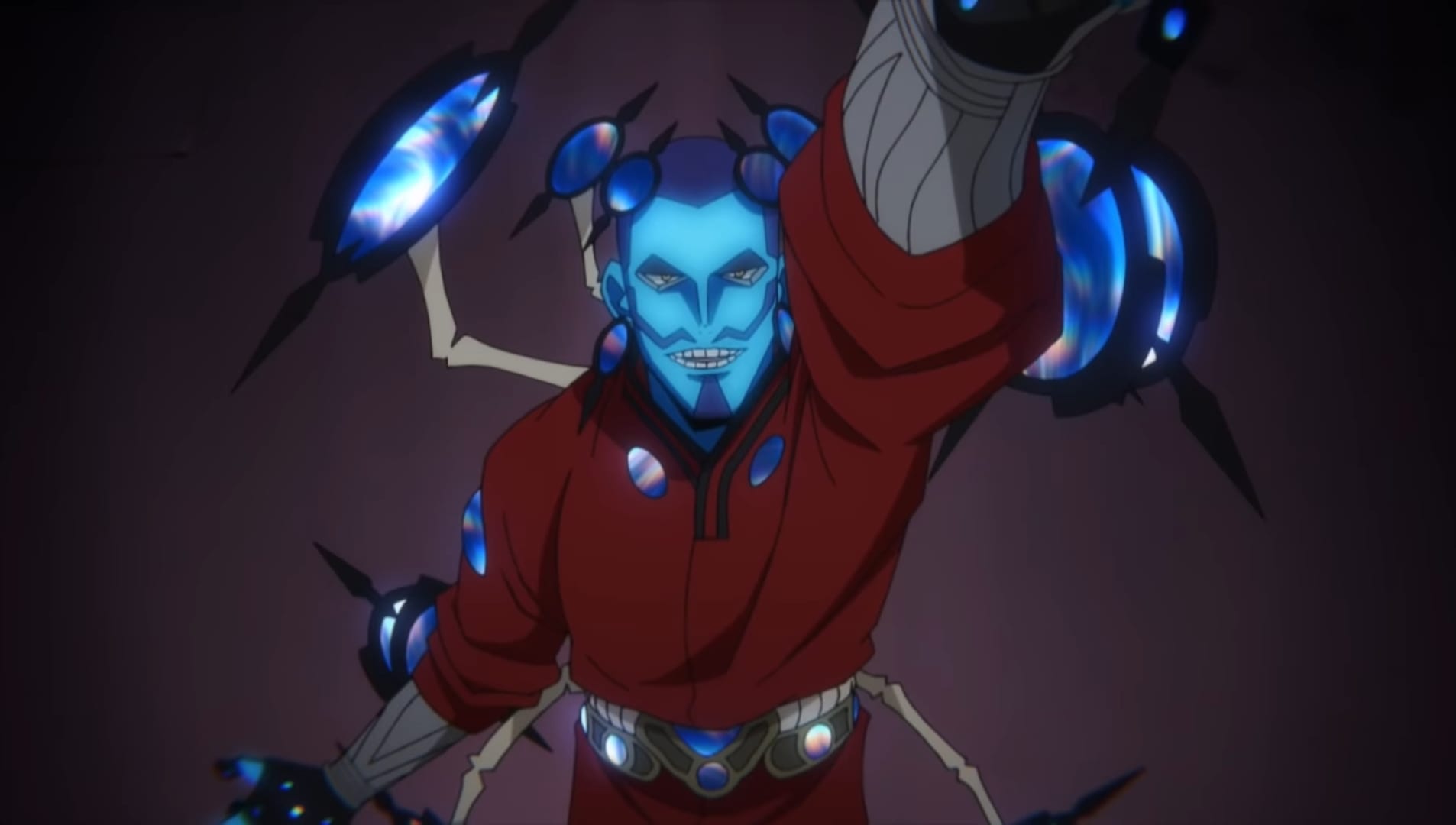 The trailer changes its lighting and we are given a glimpse of a locket. The scene lasts barely for half a second so it is difficult to make out much but it appears to be from a flashback. Then we see a countdown timer, probably indicating the two-hour time limit. After more random cut scenes of Bakugou’s explosion and Deku holding someone, we see a new scene of Deku completely battered. He is bleeding from his head but through willpower, he attacks back whoever he was attacking.

The trailer concludes with Deku’s shocked face as we hear someone say ‘it’s game over’.

The movie is set to be released on 6 July 2021. My Hero Academia will receive a theatrical release only in Japan. It will be a while before it is released or licensed for distribution internationally.

The theme song of the movie can be heard playing in the trailer. its title is Empathy and will be performed by ASIAN KUNG-FU GENERATION.