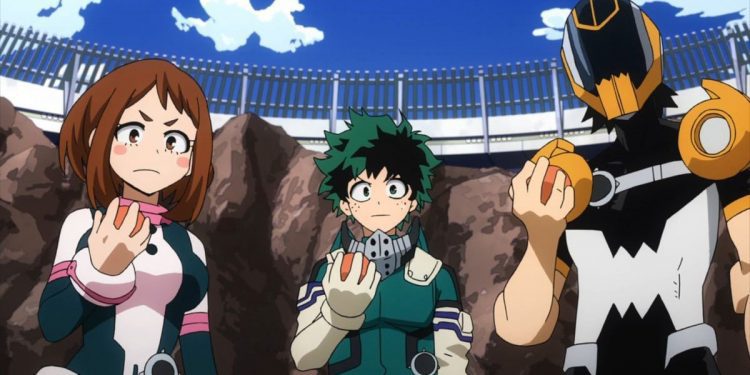 In a fictional world, our favorite characters might or might not get to celebrate their birthday. But in real life, we are not going to celebrate it no matter what. The celebrations are going to start soon with the mark of the new year. So, mark your calendars down because it’s time to celebrate the birthdays of characters from My Hero Academia. My Hero Academia is one of the top-rated anime series, that is growing its fanbase from the day it premiered. Of course, if you are an anime lover you should have known about the series, but if you are new to the fandom, add this on your watchlist and watch before we come with flooding spoilers at you. Before we start with the list, let me introduce the series to our baby otakus.

My Hero Academia is also referred to as Boku no Hiro Akademia. The Japanese manga is from the superhero genre. It is written and illustrated by Kohei Horikoshi, that became one of the most popular manga writers after this. After the manga became super popular, an anime adaption of the manga was released on 3rd April 2016, both manga and anime were equally successful and became one of the best animes of all time. The anime series follows the life events of a boy named Izuku Midoriya who was born without superpowers, but dreams to become a superhero. In order to accomplish his goals, he received training under All Might – Japan’s greatest superhero.

Izuku Midoriya is the protagonist of the series My Hero Academia from both manga and anime. Unlike other kids of his age, Izuku is born without superpowers and caught the attention of the legendary hero All Might. All might get him admitted to the Hero Academia and give him a transferable quirk to Izuku. This made him the ninth holder of One For All. Izuku is a short-statured young boy with messy fluffy dark green hair. He has large circular eyes that make him both cute and noticeable. Izuku is of timid nature, reserved, polite boy that overreacts when faced with abnormal situations. Due to being born powerless and being looked down on, he became very insecure, tearful, and vulnerable.

Even before receiving quirk from the legendary Hero All Might, Izuku has good knowledge about all the vast types of tactics and skills which are fundamental to being a hero. After receiving the One For All, he was able to harness a large amount of powerful energy and can move faster than the eyes can see.

Shoto Todoroki is popularly known as Shoto, is the tritagonist and most loved character in a matter of looks of the series of My Hero Academia. He is also a student at Hero academy, he got admitted due to official recommendations and is training to become a pro hero. Shoto is the youngest son of Endeavor the No. 1 hero. Shoto is a tall, young, and muscular well-built man. He has long hair that were half white and half red, which makes him quite noticeable. His double-colored hair is due to his quirk that also caused heterochromia iridium, which causes his left eye to be blue and right to be brown. Shoto has a very rude, cold, and aloof type of personality. He is also hot-headed, gets steamed even on minor provocations.

Shoto was trained by his father, which resulted in him being a very powerful man at such a young age. After he entered the hero academy, he was termed as the strongest student. His skills and powers were indeed exceptionally great.

Katsuki Bakugo also known as Kacchan is a student at Hero Academy. His superhero name is Great Explosion Murder God Dynamight. He is the second most important character of the series My Hero Academia. Katsuki is also a very well-built, average heightened young man. He possesses, short spiky hair of sandy blonde color. Like the previous characters, he is also arrogant, short-tempered and very aggressive, and easy to provoke person. If he was not a hero he could be counted as an antagonist, because of his villainous personality. At first, Katsuki was hostile towards Izuku because of him not having a quirk.

The reason for his arrogance is his great powers, he was easily classified as one of the strongest students of the Academy. He score third in the Quirk Apprehension Test, was the first place in the Entrance Exam, and had the most villain points. The instance of his powers was his fight against Kurogiri – a high-rated villain, whom he was able to immobilize easily.

Ochaco Uraraka also known as Uravity is also a fellow classmate of the characters mentioned above. She can also be regarded as the protagonist of the series for being Izuku’s love interest. She is a very beautiful girl with a slender and curvaceous build body. Uraraka is fair-skinned, has brown-colored hair that reaches below her chin. She also has large brown eyes that add up to her charm. Ochaco is the most laid-back character on the list, she is of a very bubbly nature and is kind and gentle towards others. She is easily amused and gets excited when witnesses a very powerful or extraordinary quirk. Another prominent, trait of her personality is being humorous, just like Izuku, her reactions can turn out to be exaggerated and humorous.

She is one of those characters who can be easily underestimated by her first look. No doubt, in the beginning, she was not as powerful as others but over the course of time in the academy, her powers increased drastically. Finally, in the U.A. Entrance Exam, she gained the third position and that was really impressive.

The next character on our list of My Hero academia characters birthday and their zodiac sign is Mirio Togata. Mirio Togata also known as Lemilion is also a student at Hero Academy. He is part of the Big 3 and is the top candidate to become All Might’s successor and the inheritor of One For All before he met Izuku Midoriya. Mirio is a very tall young man with a very muscularly built body that has numerous scares, possibly because of his previous fights. He has golden blonde hair and small oval-shaped blue eyes. Mirio is unaffected by his great powers and remained polite and kind with others. He is of a very goofy nature and is also very energetic. He is one of those who are capable of lifting everyone’s mood and is always found smiling.

Mirio being the successor of All Might is regarded as the strongest student of the whole school. He gained this image due to a combination of extremely good techniques, fighting abilities, charismatic looks, and his previous experiences, making him secure the number one spot among the pro heroes.

The next character on our ‘My Hero academia characters’ birthday and their zodiac sign’ list is Toshinori Yagi. He is also known as All Might, the number one hero. He was the one who transferred his quirk to the protagonist Izuku Midoriya. All might decide to become the mentor of Izuku because just like Izuku, Toshinori was born quirk less and was living a world that was full of evil and criminals. He is a very muscularly build tall man with yellow blonde hair. The main trait of his personality is being very supportive and energetic when it comes to teaching his students.

Yagi is known as All Might for a reason, he possesses an extreme level of power. The main ability he has is the power of One for All, with the help of this ability he is able to steal someone else’s quirk and can transfer it to someone else. Other than One for all, he can do California smash, Nebraska smash, texas smash, Detroit smash, and many other smashes which are his prominent attacks.

The list above contains the main characters in my opinion that can be unsatisfactory for some of the readers. If you want to watch the anime, then you can stream it on Crunchyroll.