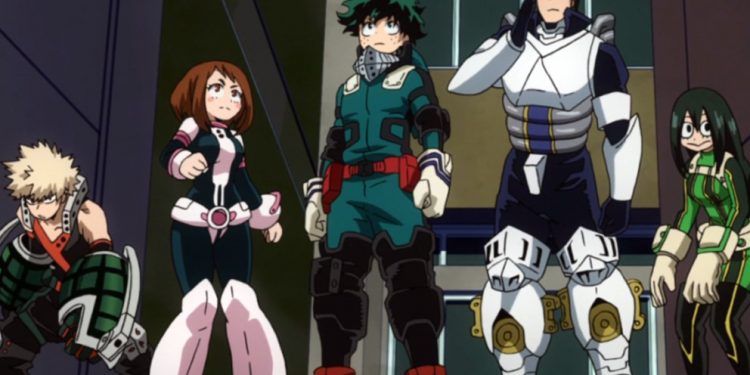 Mt. Lady and Class 1-A head out to search for League of Villains and the Liberation Army In My Hero Academia Chapter 340. The manga delayed chapter 340, which returns this coming week. All Mighty and Hawk are ready to face the villains after collecting the intel, and they know the final battle begins soon. On the other hand, the students and the Pro Heroes are yet to solve Aoyama’s case since they interrogate him and his family. My Hero Academia reveals the new era of League of Villains, the Liberation Army, and Pro Heroes.

He told Present-Mic to move away from Aoyama, telling the shocking news. That was surprising since everyone thought Aoyama would get expelled, and things changed. Eraser knows how they will handle Aoyama’s case since it is yet to be solved. The chapter begins with Deki talking with the other students. The students have noticed changes in the studio, and they can see the view of the U.A High barrier standing from there. While they are gathering, Deku shows them his damaged gauntlet. He asks Mei if it can get repaired, and Mei wonders if he wants that to happen quickly.

Deku admits that he is in a hurry and wants it to get fixed as soon as possible. Mei reveals that it is impossible to fix that in a short time since the gauntlet is damaged, and they will need time to fix it from scratch. Mei reminds Deku that she had other matters, but she had no material to fix the gauntlet. They also need to replace a few things. Mei decided to take a few things, and Lida told her about her armor. But she continues moving and reveals that they will do it since she has no original records.

Later, Mei returns and works on something. Deku went near her and asked her what she was doing, but he was surprised to see a hologram of U.A High’s evacuation blocks. Deku couldn’t believe his eyes, and Power Loader reminds that Mei was part of the barrier’s creations, and she played an essential role. Mei realizes that she can improve security while crafting something and showing new features. Mei explains to the students how her inventions will work as heroic activities. She throws the gloves toward Deku.

The gloves smash Deku’s face since he looks at Mei.  Mei also tossed the same gloves at Lida and told them they were not duplicate copies. But her technology was used to make them. She smiles when the gloves hit Lida’s face. Mei told them that she was confident that they would win the war. Later, Class 1-A, with Mt. Lady, gets ready and begins to head to their destination. Mt. Lady reminds them that the goal remains the same, and they will be searching for the League of Villains & the Liberation Army. The students know that it is related to  Aoyama’s case.

My Hero Academia Chapter 340 will be released on 16 January 2022. Todoroki believes they can do that and free Aoyama from All For One clutches. Meanwhile, Nejire, Fat Gum, and Amajiki encounter the villains in the Kansai region and battle with them while rescuing the citizens. Fat Gum knows that the war will be massive, but he is glad that different barriers protect the Kansai region. All Might reveals they have gathered enough intel suitable for their plan. Let’s look at My Hero-Academia-Chapter 340 official details.