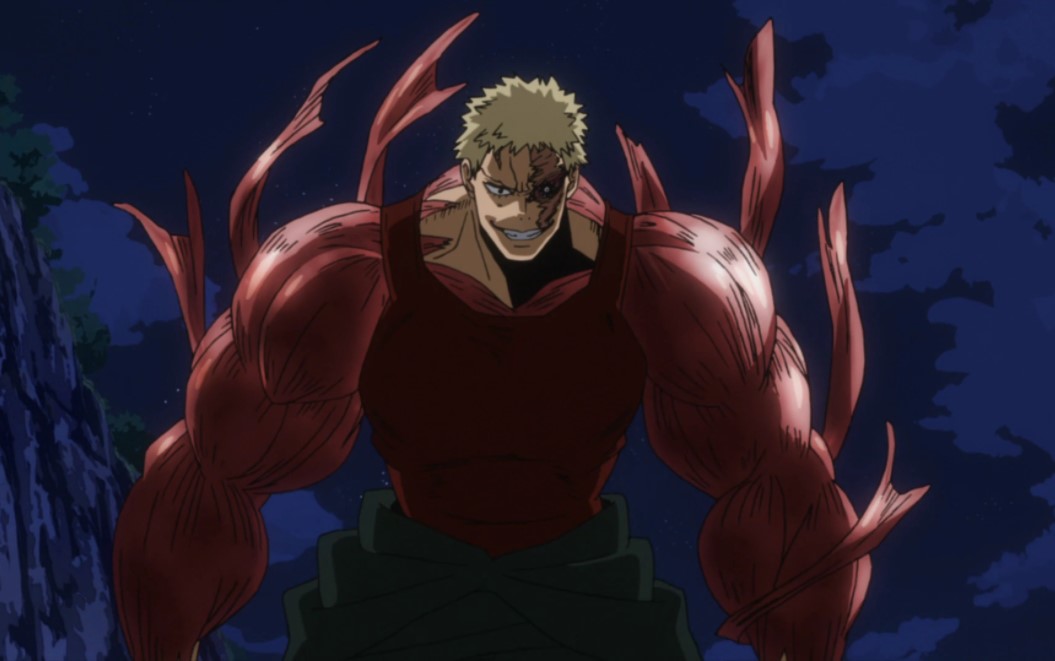 Izuku has just appeared at the battlefield and save Shindo. Shindo was getting thrashed by the villain named Muscular. Izuku smashes Muscular, who recognizes his voice when he speaks with Shindo. Today we will be looking at My Hero Academia updates and the chapter titled Full Power. Muscular comments that he will never forget Izuku and asks if it really Izuku Midoriya. He calls Izuku a little boy and said he had missed him and he was getting bored playing with weak beings. Muscular told Izuku not to runways from him.

Muscular reveals that he is not here for revenge but to have fun going wild with his Quirk. He reminds Izuku that he taught him how to have fun in the previous battle, and now he is here to do that. Izuku continues to protect Shindo looking for a safer place to put Shindo. Muscular continue to rampage while destroying the building as he tries to cath Izuku. He shouts at Izuku that they can go at it at full power. Tatami Nakagame, known as Turtle Neck, wonders how Izuku is doing since the dust covers everything.

Izuku appears and told Turtle Neck to hold Shindo. Turtle Neck shakes Shindo asking him why he pulled a foolish move that got him injured. She realizes that he needs first aid. But many building has been destroyed, and the smokescreen has covered the area. Izuku heads to clash with Muscular and realizes that One For All’s influence has opened the floodgates.

He also realizes that One For All powers has been built up across eight generations of users. He communicates with One For all, who reveals that Izuku is the ninth user, and he will feel the brunt more than them. One For All told him to relax during the battle and focus. Izuku also got advice on how he will counterattack Muscular and use his power and Quirks.

Izuku realizes that he will never forget the villain Muscular, who stands firm after being smashed mow than hundred times. He made the event float using his Quirk and decided to lure Muscular toward him by limiting visibility with the sixths smokescreen. Izuku thinks that he has to remember his previous battle with Muscular. He uses his Qurk and unleashes the move called Danger Sense that made him predict Muscular’s move better. Muscular continues to attack while shouting Midoriyaa!

Izuku unleashed the fifth’s BlackWhip, pulled Muscular towards him, and used the whip to slam Muscular with the ground. When being smashed with the ground, Muscular comments that Izuku is using cheap tricks. Izuku reveals that Tomura Shigari and All For One freed the villain Muscular. He asks where are those two villains. Muscular said, who knows since they had just told him to go wild using his Quirk. He told Izuku not to talk about those two since he has to face him.

Muscular told Izuku that they could have a rematch. Izuku holds Muscular with BlackWhip asking him why he is rampaging like this. Muscular replies that he is just trying to level with no regrets. Izuku asks why and Muscular reveals that he doesn’t want to regret having fun when he has a chance. Izuki asks him if there was no other way to do tha rather than destroying everything.

Muscular replies that this was the only way. Muscular’s body started to grow big, and Izuku realizes that Tomura has hurt many people in the past. He thinks this fight is inevitable. Muscular comments that Izuku is starting to get boring. Izuku notices that Muscular has used his muscles to coat himself. He comets that he will also us his full per.

My Hero Academia Chapter 309 Release Date and Where to Read Online?

Who is The Model & Actress Kathryn Dennis Dating Right Now?