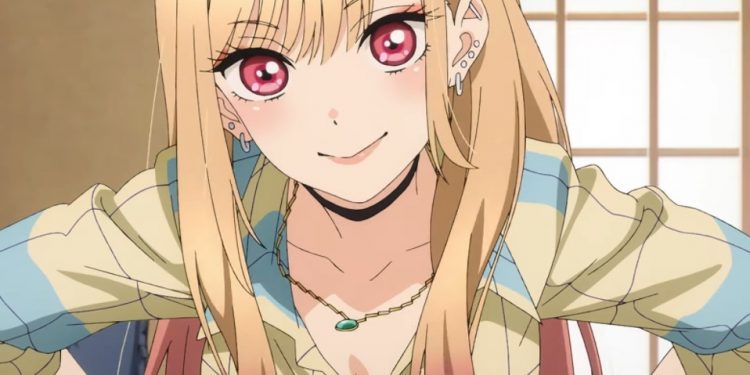 My Dress-Up Darling Episode 1 is debuting as early as January 2022. It is also known as Sono Bisque Doll wa Koi wo Suru. It is a Japanese series written and illustrated by Shinichi Fukuda. This began publishing in Square Enix’s Young Gangan with eight volumes in October 2021. CloverWorks adapted an anime tv series set to premiere in January 2022. Square Enix announced the English version of Sono Bisque Doll wa Koi wo Suru under the title My Dress-Up Darling and published it on Square Enix Manga & Books.

The series follows Wakana Gojo, a first-year high-school student who wants to become a Hina doll craftsman. He met with a popular classmate Marin Kitagawa in his first year and noticed that Marin was crafting doll costumes inside the other class. Marin realizes that Gojo is talented and decides to observe Gojo’s skills in sewing. She asks him to craft the costume from a video game’s character that she adores. Gojo had no experience making a costume, but Marin’s tenacity inspired him. He accepted the challenge and decided to make a costume for Marin.

He is an orphan raised by his grandfather, and he enjoyed watching him crafting Hina dolls. Gojo’s grandfather inside him becomes a kashira-shi, a craftsman who crafts the head of a Hina doll. Gojo grew up under the shadow of his childhood friends who always criticized him, but he managed to bear that since his grandfather always supported him. His friends believe that a boy doesn’t play with girl dolls. But Gojo continues doing what he likes and hides his doll when his friends are near him. His life changed after meeting with Marin. Marin helps Gojo go through peer pressure and live his life freely.

Marin Kitagawa played an essential role in Gojo’s life. She likes the gyaru style with an extroverted personality and attends the same class as Wakana Gojo. She lacks some skills and loves to help everyone around. Marin is overprotective and clumsy. She is an otaku with various preferences, from magical girl anime to video games.
Sajuna Inui or Inui Sajuna is a cosplayer who loves to call herself Juju. She was doing a second year and attained the girl’s school. But her physique is different compared to her age.

Gojo and Marin thought that Sajuna was an elementary or junior high student. But they were surprised when they learned the truth. Sajuna would do anything to achieve her goal, and she is open to everyone. Shinju Inui is Sajuna’s shy sister, but bigger than Sajuna and fit in Gojo’s uniform. Shinju is a junior high school student and has a big figure, 178 cm tall in great shape. She loves to stay around her sister and look up to her. When Sajuna dress in costumes, Shinju love to take pictures using their father’s camera.

Sajuna’s father always tells her that he is not giving her the camera but borrowing it. Shinju is good with computers, processing and loves to upload the images she takes. She sometimes likes to wear costumes and take a selfie, but she is scared that she might fall short of her sister’s appearance level. Sajuna, Shinju, Gojo, and Marin became friends while helping each other achieve their dreams. They enjoy going to school together. The students have noticed that Gojo cares about making Hina dolls. But Gojo has no one to share his obsession with. Gojo finds it challenging to talk with other students.

Also Read: Will The Goddess’ Wish Get Fulfilled In Life With an Ordinary-Guy-Who Reincarnated Into a Total Fantasy Knockout Episode 1?.