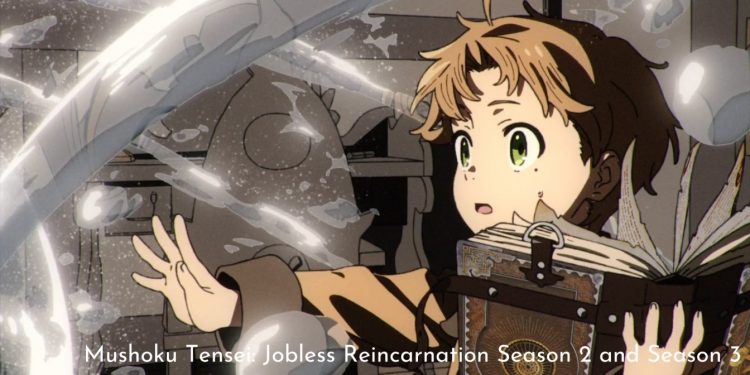 Mushoku Tensei season 3: What we know so far.

Isekai anime have again and again proven to be one of the most exciting genres out there Mushoku Tensei, yet another Isekai anime premiering in the winter of 2021 has become the talk of the room. From plot to character development, the anime has shown multiple grounds of potential that has fans screaming over its progress. The anime recently concluded and here’s all that we know about Mushoku Tensei season 3. A lot of things within the anime are beyond impressive. As the show concluded, we are handed down memories of great animation and art style along with several adorable characters, each with more individuality than just overdone fan service. Mushoku Tensei has been a great addition to the Isekai collection and a must-watch for every Isekai enthusiast.

The anime is based on a light novel series written by Rifujin na Magonote. The main novel was published by Shōsetsuka ni Narō on 22 November 2012 and it eventually ran for 25 volumes till 2015. In 2014, Media Factory published the light novel series which is currently ongoing. Mushoku Tensei: Jobless Reincarnation has also seen its bit of controversy as it got banned from Bilibili after the release of episode 5. Even among Japanese audiences, the main character’s morality has often been questioned as being shown as too perverted. Despite whatever controversies and claims, Mushoku Tensei has done exceptionally well on Oricon charts in terms of sales.

Will there be a Mushoku Tensei season 3? Here is all that we know about the series’ future and what to expect from it.

Mushoku Tensei Season 3: Will it happen?

As aforementioned, the series has been doing exceptionally well on all platforms; be it the anime adaptation or the light novel. Viewers are quite immersed in the story as the plot thickens. A lot from among its audience is already seeking to know if there will be a Mushoku Tensei season 3.

However, contrary to popular belief, the previously released animation was in fact Mushoku Tensei season 1, divided into two cours. The first cour of the anime aired from January 2021 till March 2021. After a season’s break, the anime continued to air the second cour of season 1 from October 2021 till December 2021. Now that the first season 1 of the anime has concluded, fans are excited about the second season of Jobless Reincarnation.

It is to be kept in mind that this is only speculation on our part. However, we still hope that the creators would announce the anime soon so that we can receive all the answers to the questions left by the anime’s first season.

Jobless Reincarnation: What to expect from Season 2?

Season 1 of Mushoku Tensei: Jobless Reincarnation ended with multiple twists. First with Eris’ sudden departure and then with her confession, a lot of things happened. So what can we expect from the next season of the anime? Season 1 of Mushoku Tensei ended with the Homecoming arc of the Light Novel, which is covered in volume 7 of the same. Keeping in mind if the anime strictly follows the source material, the second season of the anime will begin animating from the Mid-Level Adventurer arc next. This could mean that Rudeus will come face to face with some new and important characters that will further help in strengthening character for the anime’s finale, whatever it may be.

Following the Adventurer arc, we may even get to see Rudeus enter Magic University, something he had been preparing for so long. The light novel has multiple brilliant storylines to offer so let’s hope we get an update from the creators soon.

The first season of Mushoku Tensei: Jobless Reincarnation is currently streaming on Muse Asia, and Hulu.