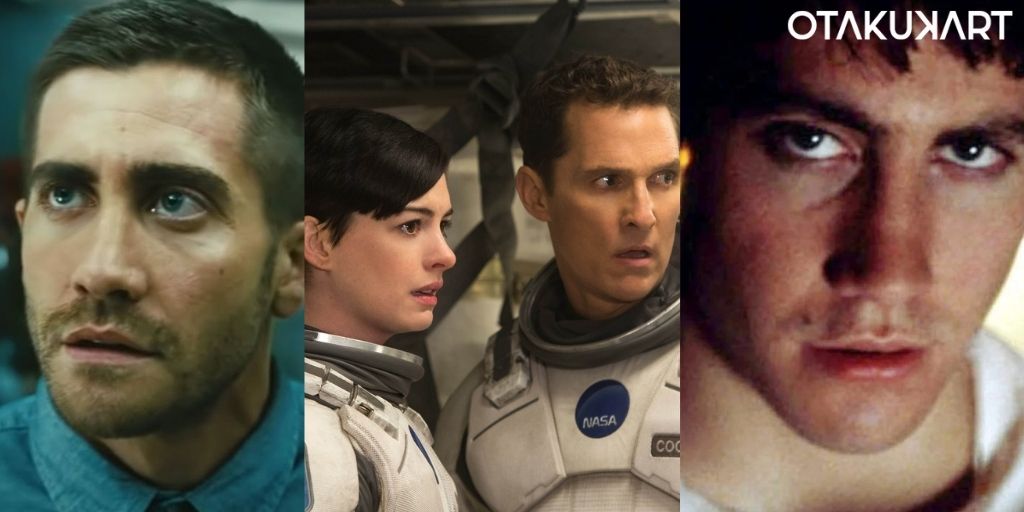 Source Code, Interstellar, and Donnie Darko's posters from the list

Before talking about movies similar to Everything Everywhere All At Once, first, let us talk about what it is about. It is about a woman named Evelyn. She is tired of her mundane life. Evelyn’s father is very ill, and her husband is ready to divorce her. However, one of her husband’s alternative versions comes to her reality and teaches her how to travel to the other realities. Now, her life has become interesting. Evelyn has a daughter who is annoyed at her. However, she is the only one who has her back.

Now, talking about movies similar to Everything Everywhere All At once, we have a lot of movies on the list. Movies like Interstellar and Donnie Dark are the most famous multiverse movies of all time. You might have seen them, but we also have other movies on the list. Now, rather than following a linear path from one film to the next, the goal here is to create a fictitious world where you can go in any direction. We can branch out unending series of sequels, prequels, reboots, and connected crossovers. This is popular among ardent fans, but it means that every time they visit the cinema, they will either have to take an online refresher, where they read about various theories on Reddit, or of course, they will be completely confused.

Also Read: Movies Similar To E.T. The Extra-Terrestrial That You Should Watch

One of the top movies to watch that is similar to Everything Everywhere All At Once is Donnie Darko. It was the acting debut of the very famous actor Jake Gyllenhaal. Easily one of his best movies, Donnie Darko is about time traveling and the multiverse. Donnie is a simple teenager who struggles with mental illness. He visits a therapist and tells her about the imaginary friend he sees; it is a rabbit. Donnie also has a difficult relationship with his family and classmates. However, he does find a compassionate friend in Gretchen. She is new in town and seems to like Donnie. Gretchen decides to date Donnie. 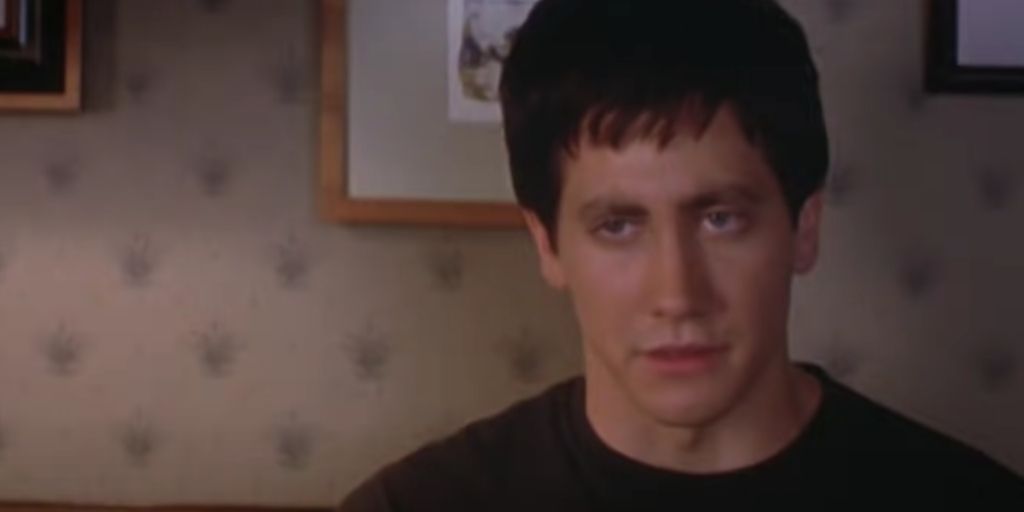 A still from Donnie Darko

The bunny friend Frank is only seen by Donnie, and one day, Donnie is nowhere to be found. An engine from a jet crashes into his bedroom, destroying his home. However, both the incident and Donnie’s escape appear to have been brought about by supernatural forces. Here we explore the themes of the possible multiverse and other dimensions. To date, people are confused about its ending and what actually took place in the movie. Even Jake Gyllenhaal is seen to have been dodging the questions regarding Donnie Darko. If you are into such movies, please give it a watch!

This movie is also about more than one universe, which is often called a multiverse. There are ways to travel over there, as shown in various movies. In ‘The One,’ there is a police agency, MVA. They can travel just for the police procedures. Gabriel Yulaw is a former MVA agent who killed another version of himself in the multiverse, in self-defense, of course. When Yulaw learns of this, he becomes enraged and kills all 122 versions of himself for two years. He escapes prison after killing them all and is being apprehended by his partner Roedecker and Funsch, a new agent. Now we see him attempting to assassinate his final victim, Gabe Law, who is a police officer. Does he succeed? Give it a watch to find out. 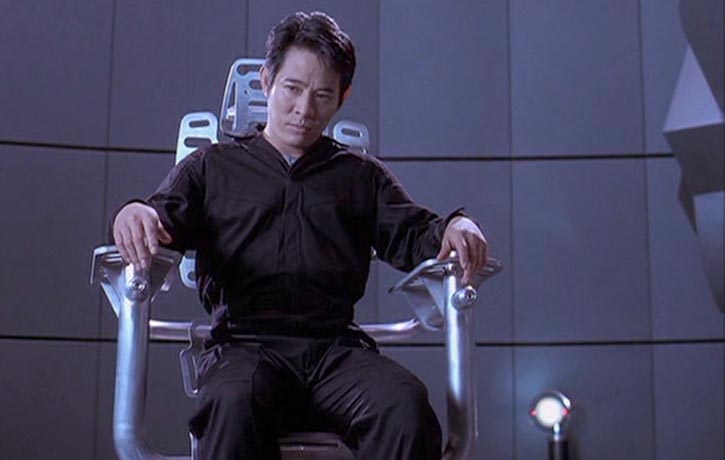 Still from The One.

Perhaps one of the most famous sci-fi of all time, Interstellar is also somewhat of the same genre. Starring stars like Matthew McConaughey, Anne Hathway, and Timothee Chalamet, this movie is very interesting to watch. Matthew plays the role of Cooper. He is an ex-science engineer and pilot. Cooper is tethered to his farming land with his daughter Murph (Anne) and son Tom (Timothee) in the near future in the American Midwest.

As violent sandstorms damage Earth’s crops, the people of Earth understand that their time on the planet is coming to an end. What do you think they eat then? They soon realize that their food becomes scarce. Now Cooper is asked to go on a daring trip with a few other scientists through a wormhole. Now we know what wormholes do. They are basically used as ports to travel to other dimensions. 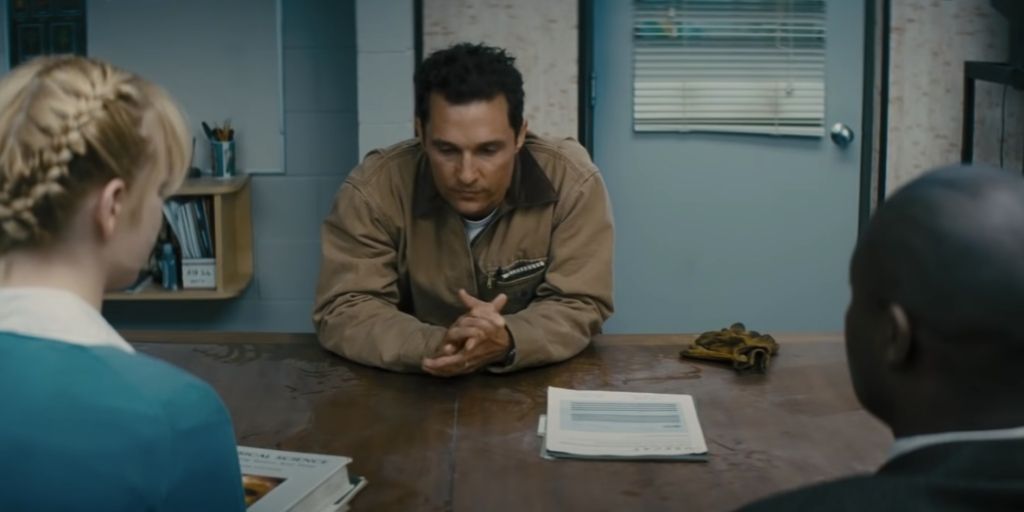 A still from Interstellar

The wormhole theory is also seen in Donnie Darko. Now, this wormhole stumbles onto a NASA base near Cooper’s home because of his scientific intellect and ability to control aircraft. This is something only he can do, unlike the other crew members with him. Cooper is left to choose between staying on Earth and risking never seeing his children in order to save the human race. How will he do so, you may ask. Well, by finding another livable planet while Earth decays. Does he find another planet? Find out in the movie.

In another movie starring Jake Gyllenhaal, we have Source Code. Jake Gyllenhaal is really into making sci-fi movies we see. In the movie, he plays the role of Army Captain Colter Stevens. He is working on a unique program that allows him to implant his consciousness into another person. Sounds fascinating, does not it? If only we could do it too! Anyway, the only catch is that you can only stay for 8 minutes at a time. Alas, there is always a catch. 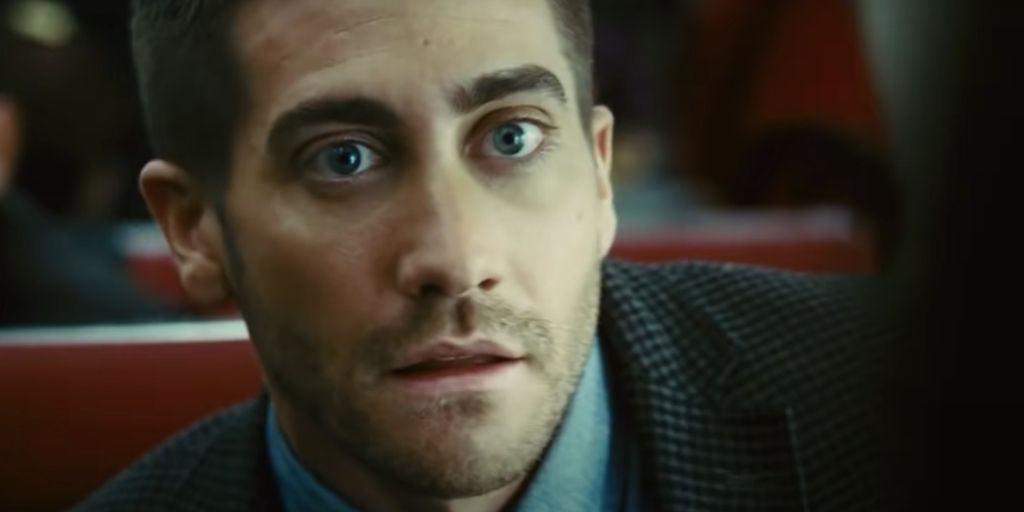 A bomb explodes on a commuter train just outside Chicago the morning he performs to do so. Colter inhabits the body of a teacher on his way to work on that train, and he has no idea what he’s doing or why he’s even there. Colter’s last recollection is of flying his helicopter in Afghanistan on a war mission. The program’s leader informs him that there is a bomb aboard the train, and he is the one who is tasked to find the bomb. Along with finding the bomb, he must also identify the bomber. Why? It is because another attack is expected later that day. Colter is also told that he can only gather facts and cannot change the past. As he grows fond of traveling partner Christina, he decides to put his hypothesis to the test.

In the movie, we have Nemo, no not the fish from Finding Nemo. Here, Nemo is Jared Leto. He is the oldest and last man to have the option of immortality in a ‘utopian’ future. The film smartly follows Nemo as a little child who must choose between staying with his father or going with his mother. Always a tough decision for a kid. Anyway, the storyline revolves around all of his alternative lives. Here comes the multiverse part. All of his other realities are predicated on his single decision. What does he finally decide? 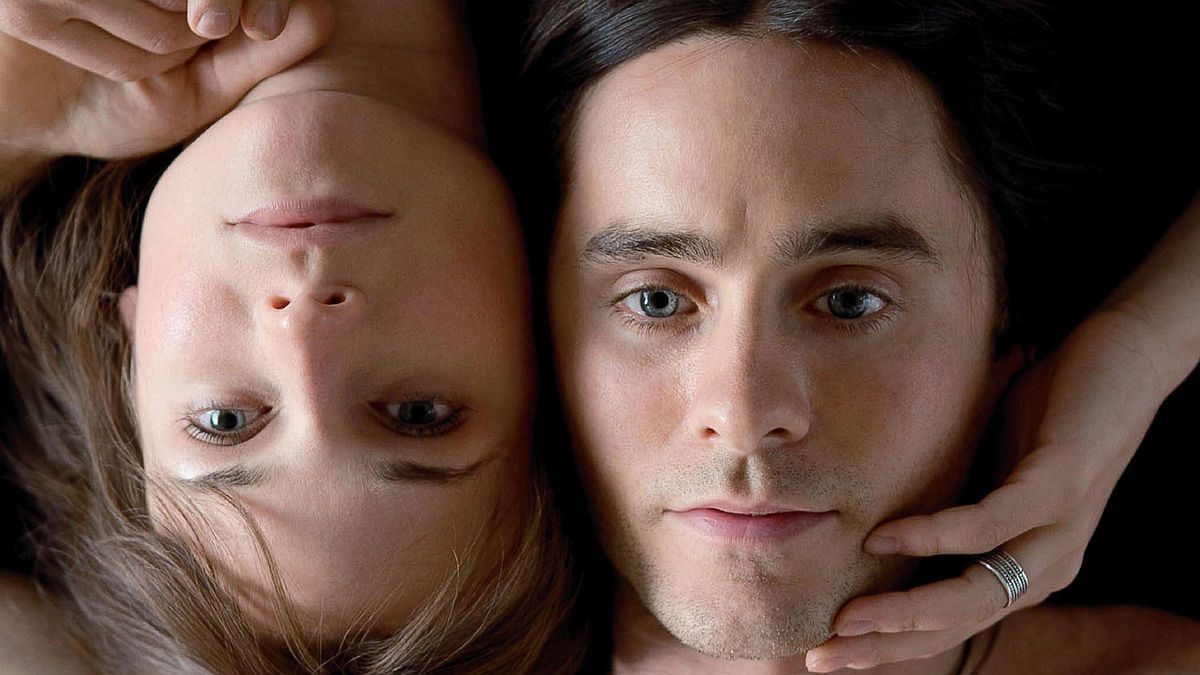 The movie is about James T. Kirk. On the day of his birth, his father dies in a struggle against a Romulan mining vessel searching for Ambassador Spock. He has grown up on Vulcan and is despised by his neighbor because of his half-human parentage. After somewhat 25 years, James has matured into a young troublemaker. Captain Christopher Pike challenges James to reach his full potential in Starfleet. 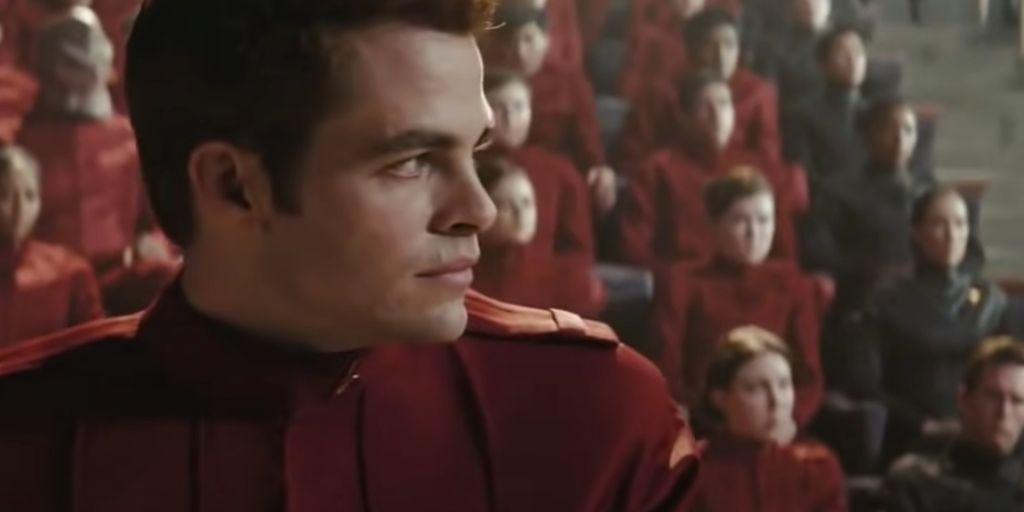 A still from Star Trek

He irritates his academy teachers like Commander Spock. Now, due to Leonard McCoy’s medical wizardry, the newly-commissioned USS Enterprise is crewed with potential cadets like Nyota Uhura, Hikaru Sulu, and even Kirk himself. Later we see the crew embarking on an adventure in the ultimate frontier. It is where the old legend will be eternally altered as a new one begins. The movie stars the very famous Chris Pine and Zachary Quinto.

We have Rhoda Williams in the movie. She is seventeen years old and received an acceptance letter from MIT. As expected, Rhoda celebrates it with her friends. However, on the same night, Earth 2 is discovered, a planet that is similar to and close to Earth. Rhoda is driving her automobile while staring at Earth 2, and she collides with composer John Burroughs. This act kills his pregnant wife and child. Now Rhoda is sentenced to prison but is released four years later and returns to her parents’ home. She gets a job as a janitor at a high school, but she is depressed and tries killing herself. Rhoda, however, survives and enters an essay contest in which the winner will be winning a trip to Earth 2. 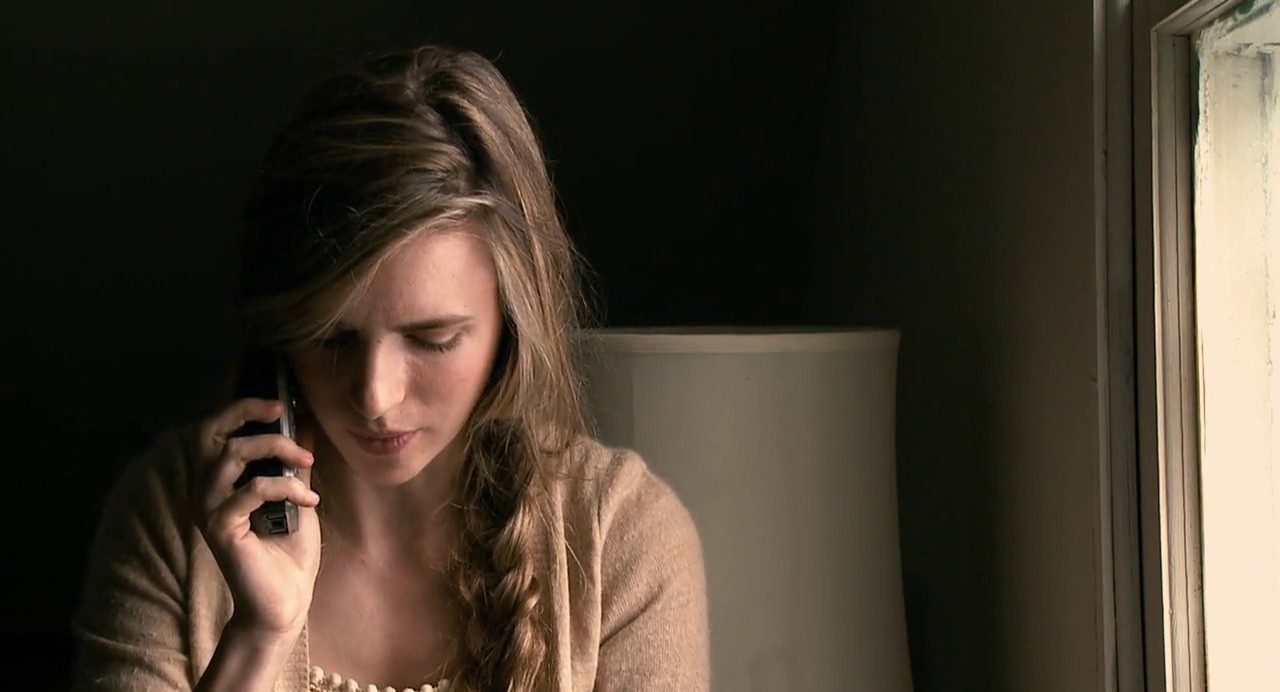 Still from Another Earth.

Meanwhile, scientists on Earth learn that Earth 2 is a mirror of Earth. Also, when the planets were seen by each other, the synchronization between the inhabitants was disrupted. Rhoda chooses to visit John, whose life has been ruined by the loss of his family. She confesses to him that she was the one who killed them. Rhoda, on the other hand, lacks the courage to tell him the truth. So, she lies and tells him that he has won a free home cleaning service. Rhoda wins the essay contest, but in the meantime, she and John have fallen in love. Now, she must choose between going or staying. However, she wants to tell John the truth first.

Also Read: 10 Movies Similar To Fast And Furious That You Should Check Out