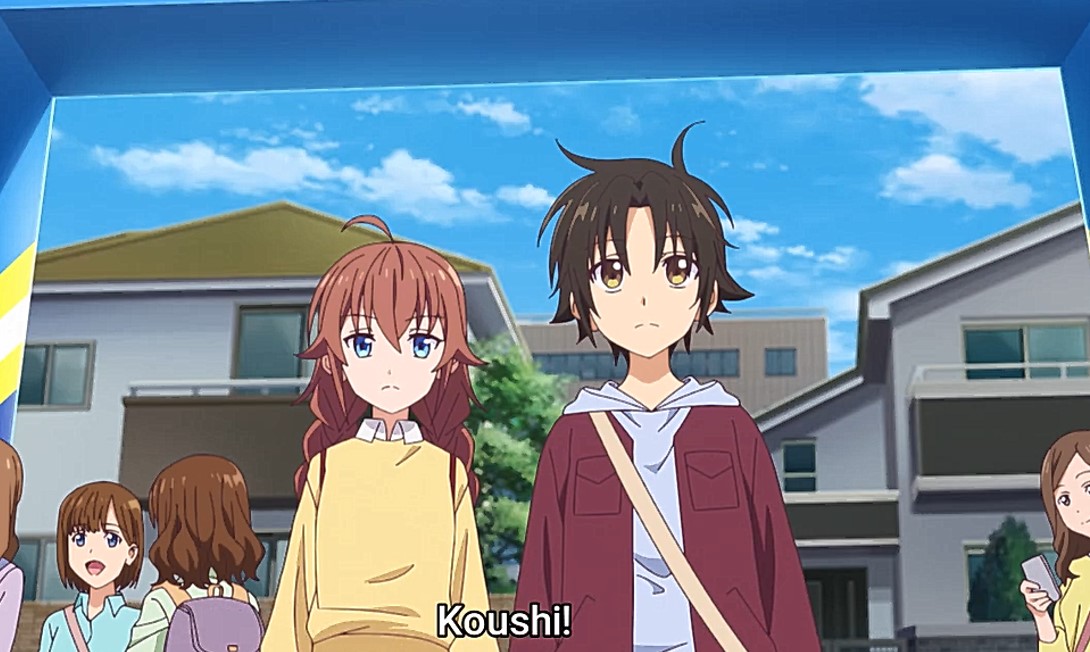 The summer break is over, and the 5th Anual Seikan Festival begins. Koushi and the girls head there to have fun. Sutea and Koushi met with Frey at the entrance wondering why she is wearing the armband. Frey told the two that she volunteered to supply these outfits and armbands to everyone at the festival. Koushi realizes that Frey is on the voluntary festival committee. Frey headed with the duo to the spooky forest and told them they were entering the Apothecary of Amazement. Koushi thinks it is not a good idea, and Frey told them not to be shy. They find Mineru at the entrance acting as a wizard that can see the future.

Mineru told them to feel welcome to the Seikan Festival Shadow Realm. They can buy elixirs with a wide range of effects that cannot be procured elsewhere. Mineru asks if her acting skills were good. Koushi asks her why she is doing this, and Mineru replies that she sells stuff to make extra cash. Mineru adds that she is selling romantic drinks that make everyone go wild after drinking them. Koushi wonders if she is allowed to sell these kinds of potions at school.

Previously on Mother of the Goddess’ Dormitory Episode 7

Mineru reveals that the potions are forbidden, which is why she is selling them here. One of the bottles falls inside Koushi’s bag, and he didn’t see that. Frey heads with Koushi and Sueta somewhere. They talked about Serena’s presentation that is about to begin. The trio enjoys watching the show, and Koushi wonders where Serena is since he can’t see her. The students played an Urban Legend role and introduced all members of the Occult Research Society. Frey comments that the Occult Research Society will capture Serene.

Koushi decided to be part of the show to save Serene before she gets captured. The trio arrives in a room that got intoxicated with love potions, and all the girls are kissing each other. Koushi wonders what is happening, and he is the only man inside the room. Koushi asks Frey why the pink mist is covering the whole area. Frew comments that love is blowing everywhere. Koushi can’t look at the girls who are kissing each other and licking each other. Occult Research Society thinks that it is Serene’s doings.

Koushi steps on one of the bottles and realizes that it is the ”Madly in Lust” that Mineru created. The side-effects of them are beginning to show up, and everyone who inhales the smoke is going wild. Frey inhales the smoke and begins to act weird in front of Koushi, drawing the attention of all the girls. The girls start to toy with Koushi, and Sueta punishes them for trying to trap Koushi. Later after the incident, Koushi confronted Mineru and talked about what she did. Mineru tosses another potion, and the girls chase Kiriya. Koushi receives a medal, and Mineru told him that he is the hero of the day.

Where To Watch Mother of the Goddess’ Dormitory Episode 8

You can watch Mother of the Goddess’ Dormitory Episode 8 online on ANIPLUS. Mother-of-the-Goddess’ Dormitory release new episode every week with English subtitle and you can access them on its streaming platforms.

No More Heroes 3: The Next Chapter of Travis Touchdown

Where Does The Filming Of Animal Kingdom Take Place?