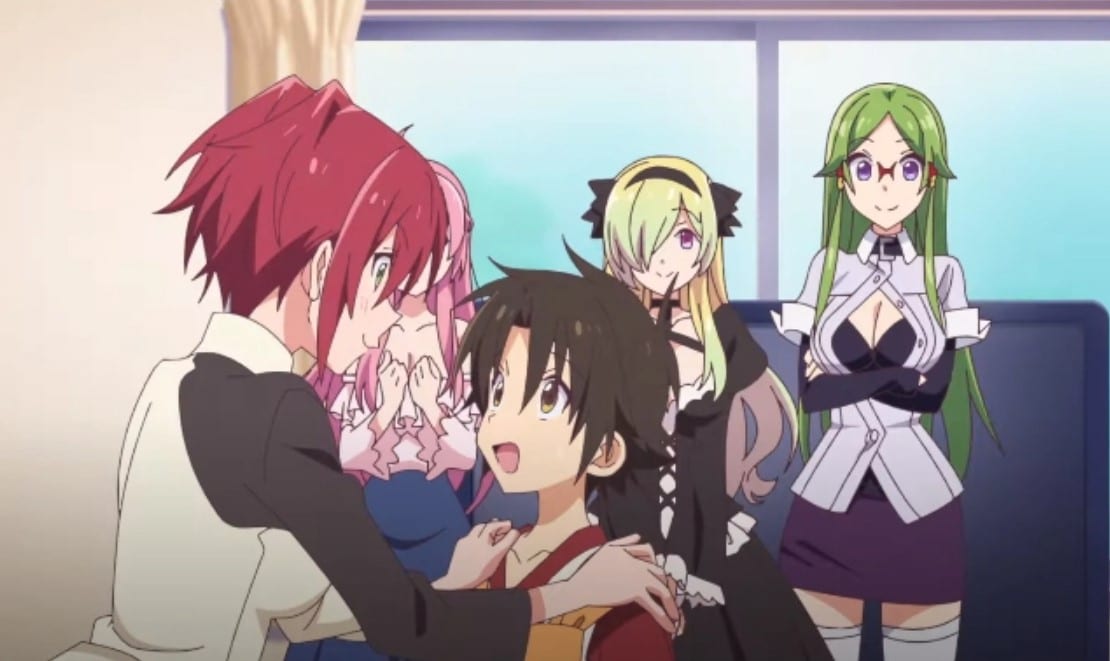 The Mother of Dorm surprised the girls when he brought his girl home. The girl witnesses the unexpected after finding Mineru, Frey, and Kiriya half-naked. The girl wonders how Koushi lives with these girls. Koushi and the girl enter the dorm and encounter Aneta, surprised to see Koushi with someone. In the recent episode of Mother of the Goddess ‘ Dormitory, let’s find how Koushi will explain his story to the girls. Aneta asks Koushi who the girl is, and Koushi replies that she is Sutea Khoroya. Koushi also adds that Sutea is his classmate, and they have been friends since preschool.

Sutea enjoys her food while Koushi talked about Aneta as one of the residences. Mineru spies on the trio, wondering how they will handle things. Frey thinks that a childhood friend is better than she thought. The girls confronted Sutea and wanted to touch her. Koushi stopped them and told them that Sutea doesn’t like to be touched since she has a medical condition. Sutea kicks Koushi for talking on her behalf without her concern. Mineru comments that this is what middle schoolers do. Frey praised Sutea and said she is showing affection.

Sutea begins to feel shy after her anger subsides and realizes that she has kicked Koushi. Mineru told Atena that she got the formidable opponent on her hands. Frey adds that a childhood friend can’t beat Atena. Atena replies that she considers Koushi a friend, not the girls’ thinking; Mineru comments that a big sister might stand a chance. Kiriya arrived and said she is the big sister and they are right about what they are saying.

Previously on Mother of the Goddess’ Dormitory Episode 4

The episode title is ”Sutea’s Goddess Dormitory Caution Meter.” Kiriya and Atena fight over the big sister, and Sutea gets furious, telling the girls that the dorm is an inappropriate environment for Koushi. The girls get surprised and wonder what Sutea is saying. They forget that they are half-naked showing their things in front of Koushi. Later, Atena visits Koushi’s room, checking if it is clean after realizing that Sutea will give judgments soon. She finds that the room is clean, and she has to fulfill her role as a big sister.

Sutea is observing the two and gets furious since Atena is spending more time with Koushi. Sutea told Koushi that she is giving him time to redeem. The trio dressed adequately and began to behave around Koushi. Mineru told Sutea to move to the next room and check it. They started with Mineru’s room, and they decide to enter since Mirneru keep on doing explosive experiments inside her room. Koishi explains why they are not entering Mineru’s room and that Mineru is a researcher.

The experiments that she conducts tend to fail most of the time. Sutea replies that it reminds her of a rumor that she heard at school ”The Toxic Lady of Seikanm Wome’s University.” Atena comments that it sounds like some urban legend. They head to Frey’s room and finds that everything is spotless, and she hangs her clothes well. Frey told Sutea that she loves wearing and dressing others in cosplay, and her room is a costume department. Later, Sutea asks the girls about their relationship with Koushi, and they told her that he is their brother.

Where To Watch Mother of the Goddess’ Dormitory Episode 5?

Wolfgang Van Halen Girlfriend: Who is the Bassist Dating?