Mortal Kombat is the 2021 reboot of the video game-adapted Mortal Kombat film series. Helmed by Simon McQuoid in his feature directorial debut, the film follows the beloved Mortal Kombat characters duke it out in a bloodfest full of gore and fatalities. Greg Russo and Dave Callaham have created the screenplay from a story by Russo and Oren Uziel. The film is based on the popular video game franchise of the same name. It stars Lewis Tan, Jessica McNamee, Josh Lawson, Tadanobu Asano, Mehcad Brooks, Ludi Lin, Chin Han, Joe Taslim, and Hiroyuki Sanada. Benjamin Wallfisch has composed the music for the film that contains the classic video game theme. Dan Lebental and Scott Gray have edited the film while Germain McMicking handled the cinematography.

Mortal Kombat hit theatres internationally on April 8, 2021. It subsequently hit theatres as well as HBO Max streaming service in the US on April 23. The film is receiving a mixed bag of reviews from critics and fans alike. While it’s certainly an improvement from the 1997 film, it doesn’t exactly break any new ground. The action sequences have sufficient gore and violence, being true to the video games. However, the choppy editing and poor writing drag it down from living up to the potential it sets up in the beginning. Lewis Tan stars as the lead protagonist Cork Young, an original character that wasn’t in the games. He’s a descendant of Sub-Zero’s ancient enemy Hasashi/Scorpion(Hiroyuki Sanada). At the same time, Joe Taslim plays the main antagonist of the film as Bi-Han, aka Sub-Zero. 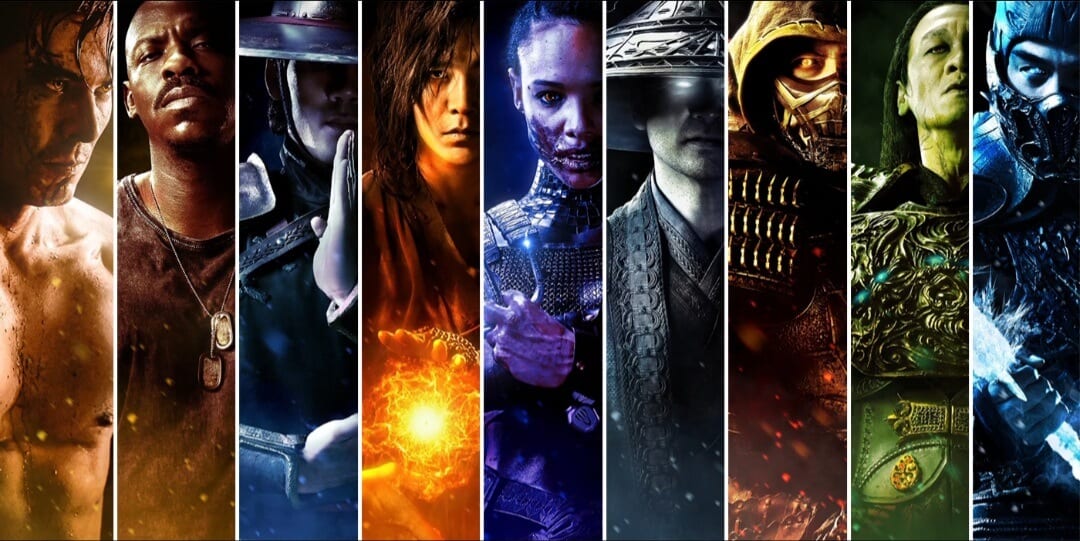 Mortal Kombat 2021 kicks off with a truly great fight sequence in 17th century Japan. Hanzo Hasashi lives a grateful life with his beloved wife, son, and infant daughter. However, the peace doesn’t last long as Bi-Han and his Lin Kuei assassins attack the family. Hasashi gets wind of the attack and runs back to the house, only to find his wife and son frozen to death. Stricken with grief and rage, he unloads on the assassins, killing them with gruesome ingenuity. The choreography in this fight scene is immaculate, but unfortunately, the choppy and quick-cut editing can take you out of it. After a genuinely hype fight scene between Bi-Han and Hasashi, the former emerges as the victor. Hasashi dies, and flames engulf him, sending him to hell, as we learn later on. Bi-Han defeats Hasashi, believing that the Shirai Ryu ninja clan is finished.

However, he and his assassins missed Hasashi’s infant daughter, who his wife and son had hidden inside the home. After the fight, we see the God of thunder, Raiden, arriving at Hanzo’s house and taking his surviving child to safety. We then move to the present day. The Outworld realm had defeated Earthrealm in nine of ten deathmatch tournaments called “Mortal Kombat.” However, according to an ancient prophecy, the “blood of Hanzo Hasashi” will unite a new generation of Earthrealm’s champions to prevent Outworld’s victory. Outworld’s soul-eating sorcerer Shang Tsung knows of the prophecy and wants to defy it. He employs warriors to kill Earthrealm’s champions before the next tournament even begins. He sends Bi-Han to go to Earthrealm and start killing the champions, who all carry a dragon marking. 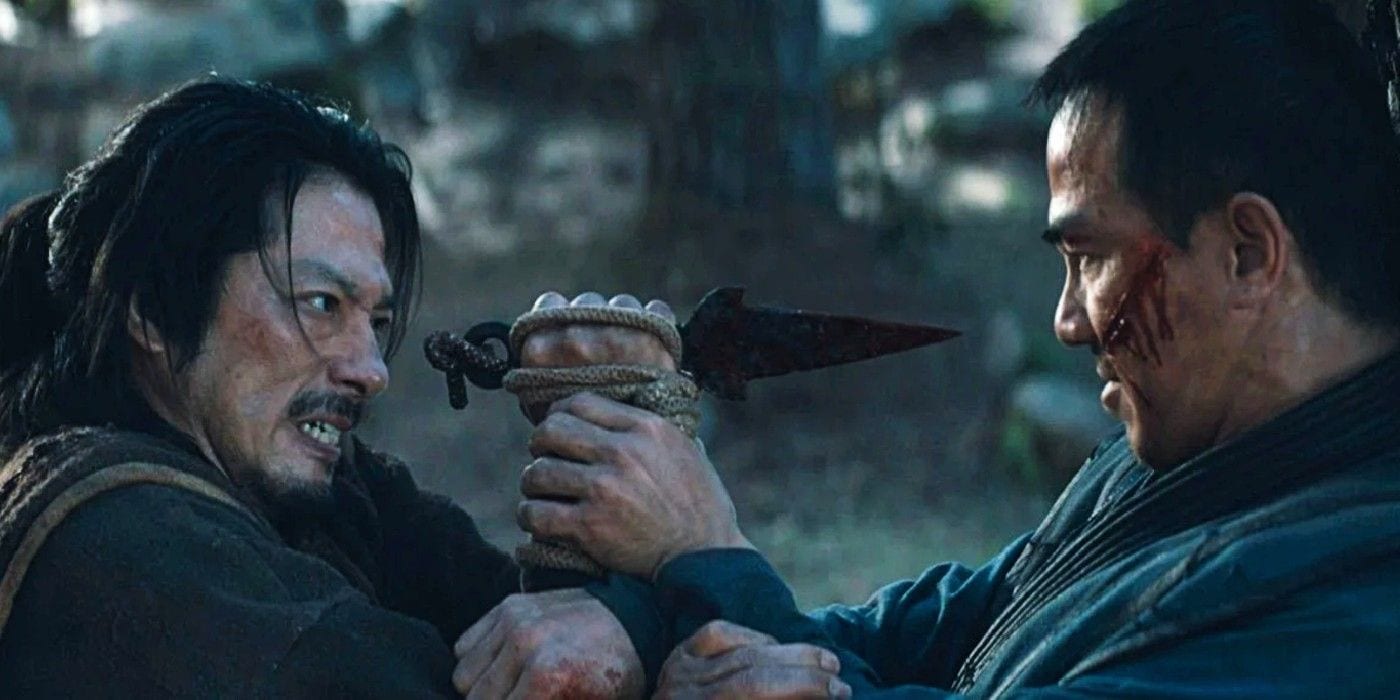 Introduction to the Earthrealm Champions

Meanwhile, back on Earth, we meet Cole Young, a former MMA champion who is past his prime. As he loses another fight, we meet another character we know from the video games — Jackson “Jax” Briggs. Later on, Cole Young, his wife, and his daughter are at a restaurant when Sub-Zero arrives to kill them. Jax, who is a Special Forces Major, rescues the family. They get in his car and try to flee away. However, Sub-Zero confronts them again. Jax directs Young to safety, telling him to seek out his partner Sonya Blade. As he stays behind and fights off Sub-Zero, he gets both of his arms frozen and then crushed. Cole then goes and tracks Sonya to her hideout. At her place, he finds a captive mercenary named Kano, who Sonya is interrogating.

We then get a bit of an exposition dump from Sonya, who reveals to Cole about the Mortal Kombat tournament. She also tells him how the dragon marking can be transferred to anyone who kills the original bearer. Shang Tsung’s assassin, Syzoth, attacks the hideout. They all fight him, and at last, Kano kills him in a brutal fatality move. The trio then travels to Raiden’s temple and meets Earthrealm champions Liu Kang and Kung Lao. Liu takes them to Raiden, who is disappointed at the newcomers. Sonya discovers that Jax has also been brought there and has new mechanical arms. Shang Tsung arrives at the temple along with Sub-Zero and Mileena. He tries to kill off the champions, but Raiden puts up a shield to stave them off. Cole and Kano train with Liu and Kung to unlock their “arcana,” a special power unique to a dragon mark-bearer. 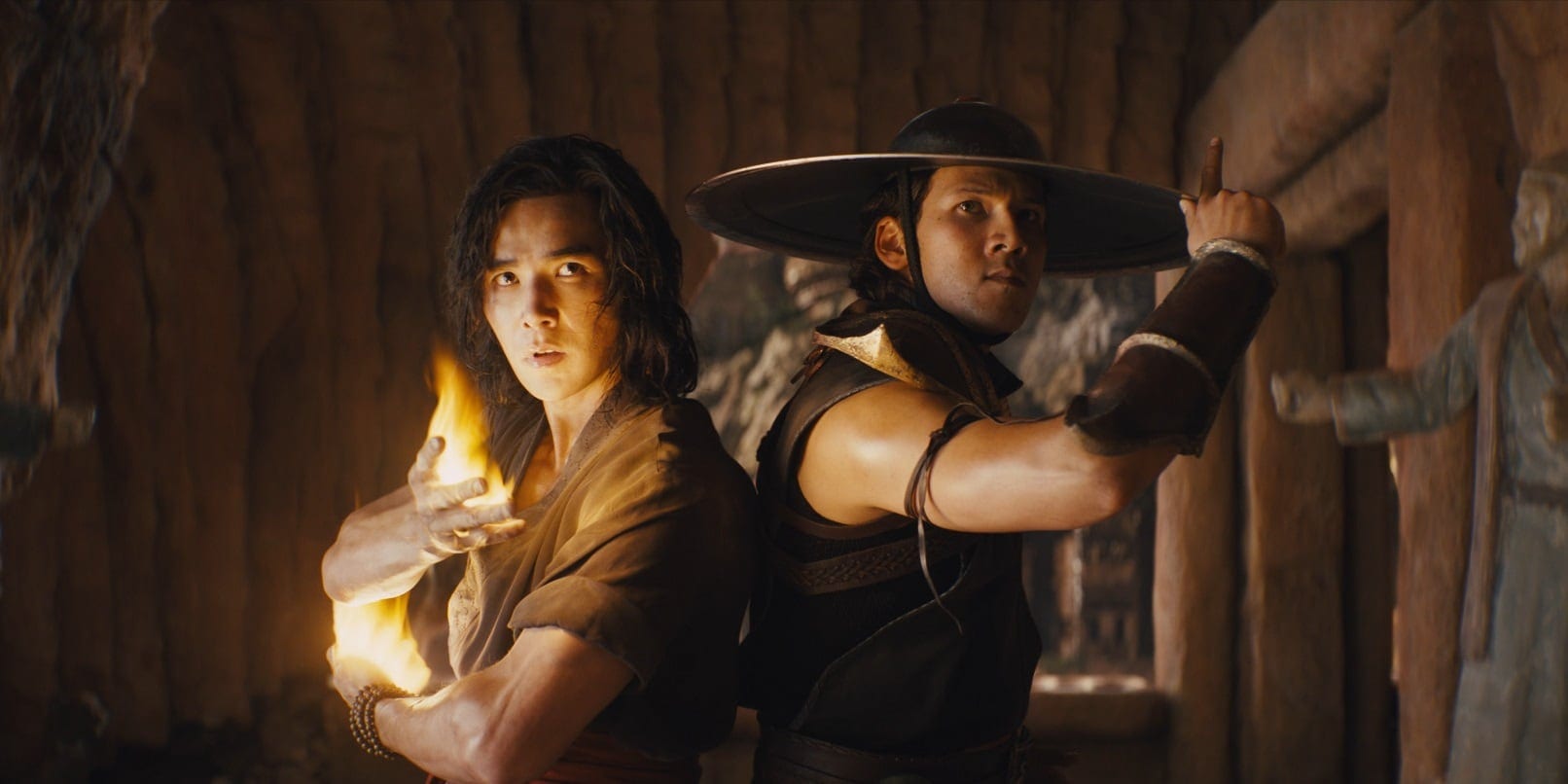 Awakening Arcana and the First Fight

Kano awakens his arcana amidst a heated argument with Kung Lao. Cole fails to awaken his, despite repeated efforts. Raiden is disappointed at his failure and tells him that he expected more from the Hasashi bloodline. He then allows him to return to his family. Sonya tries to convince Cole not to give up, but he goes away. Back on the Outworld, Tsung assembles a team of warriors to return to Earthrealm and kill the champions for good. The team includes Sub-Zero, Mileena, Reiko, Nitara, Goro, and Kabal. Knowing the nature of Kano, Kabal meets him at the temple and bribes him to switch sides. Kano agrees and removes the shield with his eye-laser. With the shield down, the Outworld warriors enter the temple. While Goro attacks the Young family at their house, Kung Lao fights Nitara, sawing her in vertical halves.

Mileena fights Sonya but doesn’t kill her, saying that her death is not worth anything since she’s not a mark-bearer. Kano then attacks Sonya and throws her under the rubble, where Jax is already lying, courtesy of Reiko. Cole miraculously awakens his arcana and develops armor around his body. He then defeats Goro and heads back to the temple to help. At the temple, Raiden reveals Cole’s bloodline, making Tsung and Sub-Zero furious. Then Raiden teleports most of the Earthrealm’s champions to a safe space between realms, called the Void. However, Sub-Zero attacks Cole before he could teleport. Kung defends Cole, but Shang steps in and sucks his soul out. After mourning Lao’s death, Cole unites the team in a plan to engage the Outworld warriors individually before killing Sub-Zero collectively. 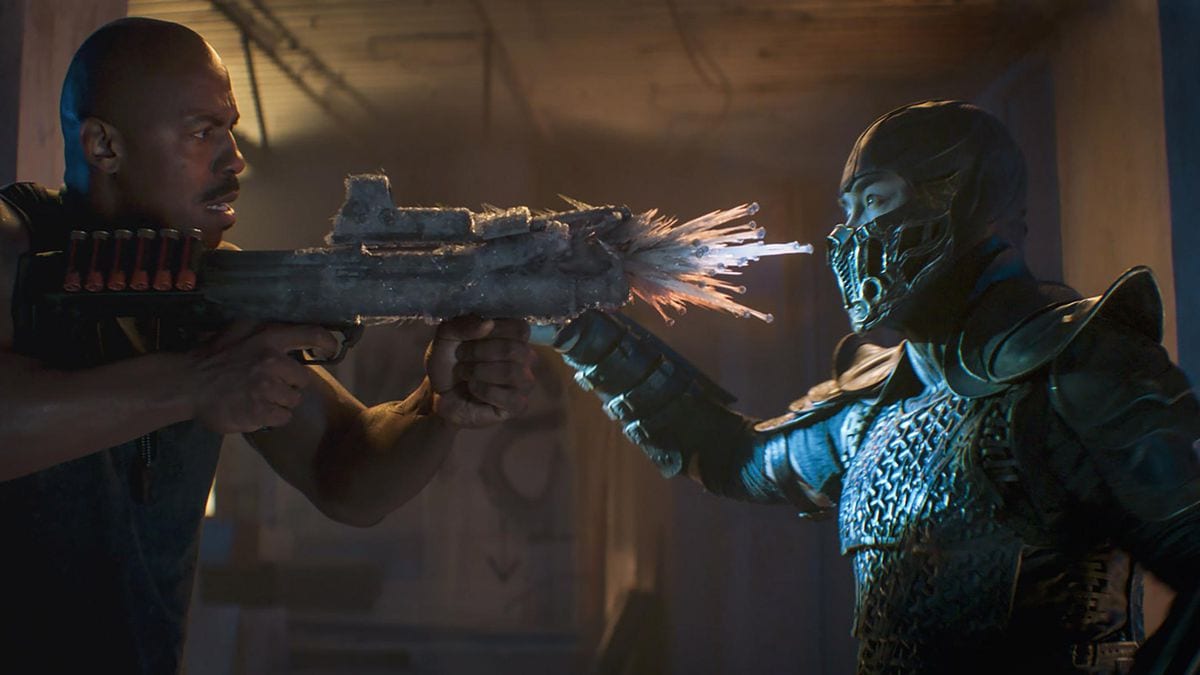 Raiden transports them to the enemies. Lao kills Kabal while Jax smashes Reiko’s head between his hands. Sonya fights Kano and eventually kills him. Following his death, she attains her dragon mark and arcana. She then uses her arcana to kill Mileena easily. That’s when Sub-Zero appears, luring Cole to fight him one-on-one. He had abducted Cole’s family and frozen them. Sub-Zero dominates the fight, but eventually, Hanzo Hasashi comes back from the Netherrealm as Scorpion. He and Cole then fight Sub-Zero before Scorpion burns him to a crisp with hellfire. He then thanks Cole for freeing him and requests that he keeps the Hasashi bloodline alive. As he departs, Raiden and others arrive.

Also arriving is Shang Tsung, who warns Raiden that next, he will bring armies to Earthrealm. As he sends the corpses of the dead champions back to Outworld, Raiden banishes him. Raiden then tells the Earthrealm champions that he’s preparing a new list of warriors for the next tournament. He then assigns the champions to go and recruit the new warriors. The film ends with Cole departing for Los Angeles to search for Hollywood superstar Johnny Cage. 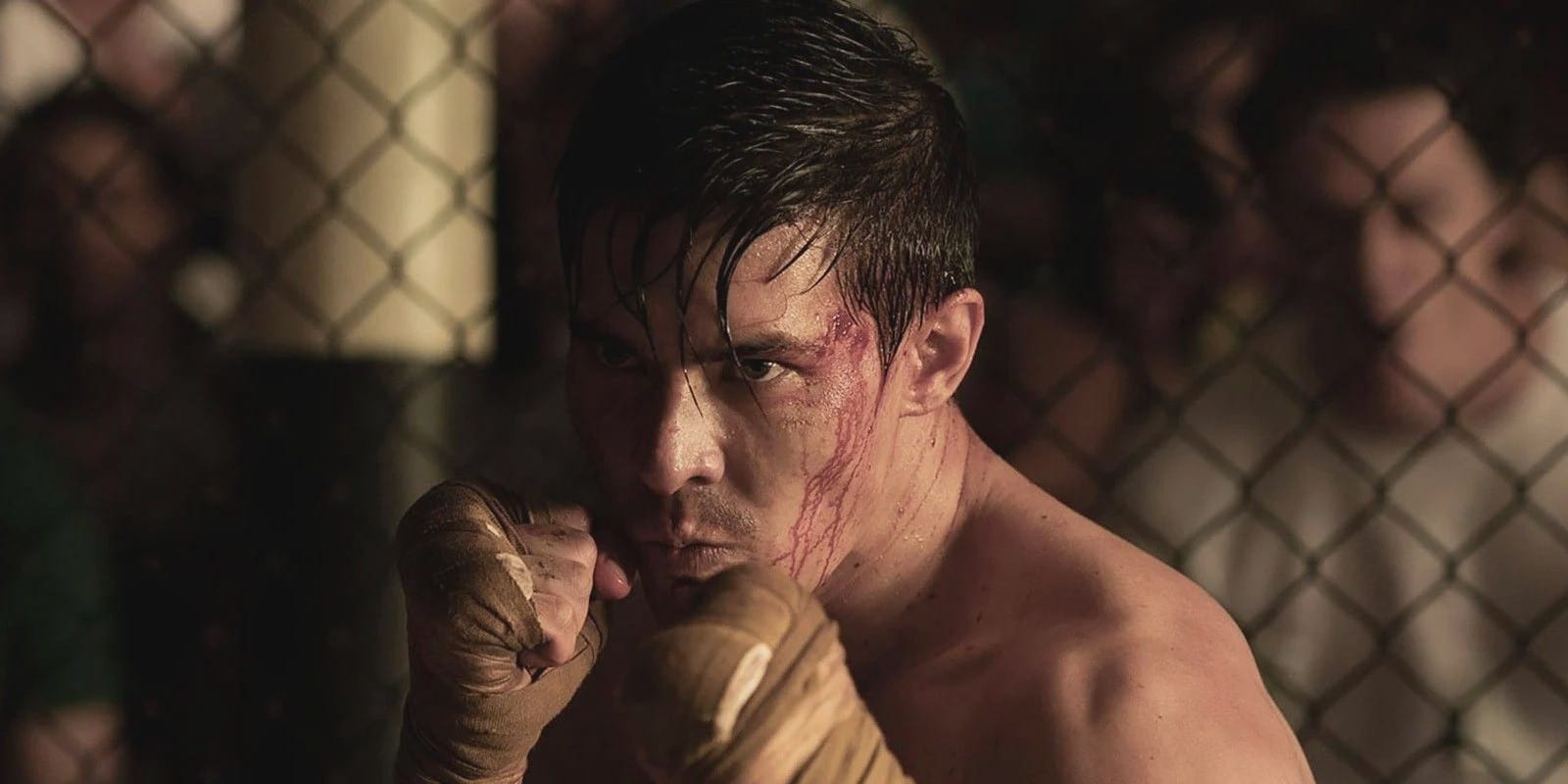 Cole Young is the descendant of Hanzo Hasashi.

Mortal Kombat Delivers On The Gore But Not On The Fun

The film has a sufficient amount of gore and fatalities that the video game franchise is known for. However, it could have been cracked up even higher. The fighting in the opening sequence is legitimately great, with seemingly great promise for what may follow. Sadly, as soon as the fight between Hanzo and Bi-Han ends, the film falters immediately. The writing is very weak, and the paving is also weird. We’ve all come to not fall for the hype that surrounds video game adaptations nowadays. The track record for them is very bad, and Mortal Kombat doesn’t help to improve it much. It’s certainly an improvement upon the 1997 one, but that’s not saying much. Plus, this is a much more corporate-led popcorn flick that feels devoid of much love for the characters. The lead character of Cole Young is very bland and bankrupt on personality.

One of the few characters to have any kind of charm is Kano. He works great as comic relief amidst a bunch of bland and dull characters. It feels as if the cast doesn’t get nearly enough to work with here. The final fights between the two teams feel very rushed and lackluster. Not to mention implausible. The Earthrealm champions who awaken their powers literally during fights defeat the Outworld warriors like it’s a cakewalk. It’s nonsensical for Cole Young’s character to survive, much less dominate the fights. His spiel is carried by the good ol’ plot armor, literally, in this film. A lot of fight is also spoiled by choppy and frantic editing, which is a shame when you have great physical actors like Sanada and Taslim. Besides some cool and enjoyable fatalities, the film is a bore for the most part. 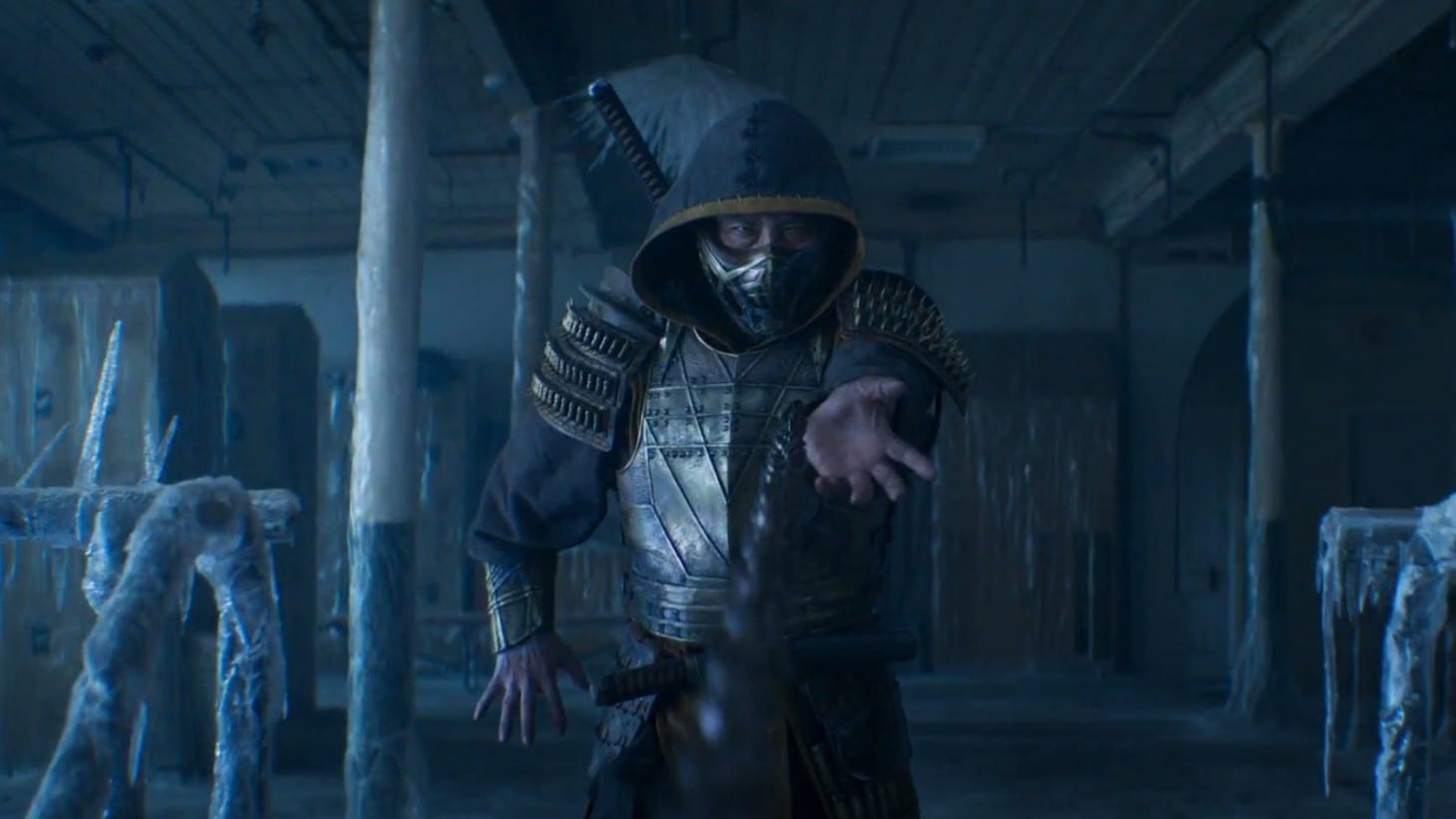 Mortal Kombat is a mildly enjoyable adaptation of the beloved video game with a few great fighting scenes. The CGI is also good, so are the gruesome ways the characters die off. But ultimately, it’s bogged down by a poor screenplay and some bad editing choices. We rate Mortal Kombat a 2.5 out of 5.

Check out the trailer here;