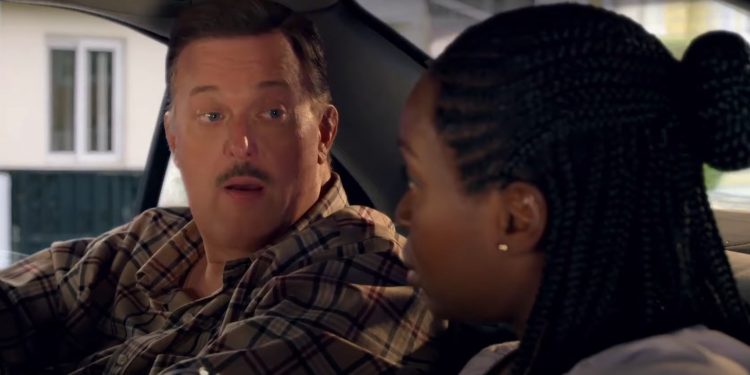 In previous episodes, we saw Christina making a unilateral decision of leaving the family business. And that’s not all, Kemi was witness to MOrenike’s coming out. What’s happening in Bob Hearts Abishola Season 3 Episode 9? On one hand, Kofo’s idea to pursue Christina’s marketing pitch takes roots. But will Bob and Dottie continue to trash it? On the other hand, Kemi’s romance with Chukwuemeka might become even more complex.

In Bob Hearts Abishola, all love angles become complex, that’s for sure, just take a look at Christina’s convoluted relationship status with Kofo after leaving MaxDot.  While Abishola and Kemi might give her some comfort, the three are going to seek external consults to help her out. And let’s not forget Bob. He’s in a rough spot after his managerial decisions. But that’s just another whole story in this CBS love story we’re scooping for you here at Otakukart.

Bob Hearts Abishola Season 3 Episode 9 will release on December 6, 2021, on CBS at 8:30 PM, Eastern Time of the United States. To begin, each episode has a half-hour run time. Secondly, they drop weekly on Mondays. Thirdly, episode nine’s title is “I’m Not Edsel”, it was a script written by Alan J. Higgins, Gina Yashere, and Chuck Lorre.

Where to Watch Bob Hearts Abishola?

You may watch ‘Bob Hearts Abishola’ season 3 episode 9 on the network when it airs on the above-mentioned day and hour. You may also watch it on CBS’ official website, 24 hours after it airs on cable television. The program is also available online via CBS All Access. The episodes are available for purchase or rental on iTunes, Amazon Prime Video, Vudu, Microsoft Store, Spectrum on Demand, and FandangoNOW. ‘Bob Hearts Abishola’ may also be seen on Philo TV, FuboTV, DirecTV, YouTube TV, and Xfinity.

In episode eight, titled “Light Duty”, Christina found herself without a clue of what to do right after quitting her employment at the MaxDot. Because of that, Kemi and Abishola will take her to a priest of the Yorubas to give her some counseling. And the man pinned the blame on Christina’s mother as a pathway for her personal growth. On another note, Bob’s managerial decision to promote Kofo at MaxDot will give him second thoughts for upcoming episodes. He might be regretting not promoting Goodwin.

Bear in mind that when Morenike told Kemi that she was gay, that sent shockwaves in the environment. Just take a look at Gloria’s reaction when Kemi and Abishola told her about this topic. This is one of the hot topics in the series, for homosexuality in Nigeria is quite a controversial societal issue. And the portrayal in this series of that topic and its reaction are dead on point: Kemi and Abishola claim that they don’t know any Nigerian gay people and think that Morenike should remain in the closet rather than speak frankly about their sexuality.

Elsewhere, at MaxDot, Christina proposed a Twitter marketing campaign featuring a talking sock, which Bob endorses. Christina, on the other hand, said that she is abandoning the conservative principles since she is not cherished there. Everyone failed to persuade Christina, and she resigned from her position, despite Bob’s backing. Furthermore, Goodwin anticipated being promoted to replace Christina. Bob, on the other hand, ended up pushing Kofo. As a result, Goodwin became dissatisfied and chose to resign. But he finally returned to his work as the floor manager since he wanted cash for his children’s schooling.

Bob and Abishola took a flight to Nigeria to pick up Dele from his biological dad. But at the last moment, Abishola chose to let Dele stay. The couple married and went back to the States, they settled into their lives while everybody else had a lot of issues. As stated earlier, Morenike’s coming out was a shock for Chuey and Kemi. And for future episodes, the remaining plotlines, namely Christina’s relationship with her mom as well as Morenike’s life, will have a lot of things for the next episodes.