Moonshine poster making behind the scenes uncovering playful bonding between the leads, uplifting the whole atmosphere, and bringing laughter on the set. 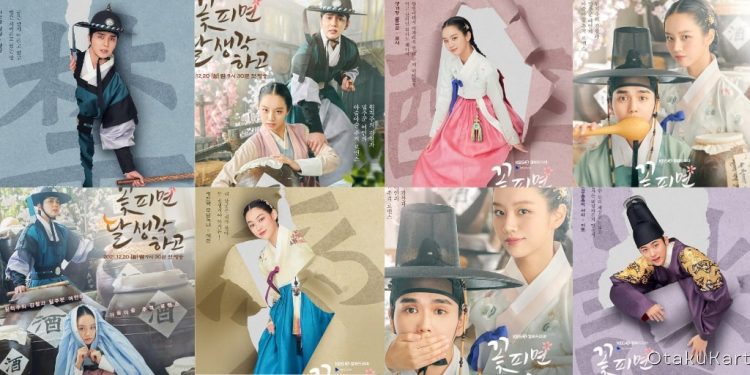 The upcoming Korean drama ‘Moonshine’ is coming soon on the screen! It has gained viewers’ attention due to its unique plotline and the cast featuring Yoo Seung Ho, Lee Hye Ri, Byeon Woo Seok, Kang Mi Na, and many more. Recently, KBS has dropped the ‘Moonshine’ poster making behind-the-scenes video. It reveals adorable and mischievous chemistry between the leading cast! It will definitely pull anyone towards the historical romance comedy ‘Moonshine,’ also known as ‘When Flowers Bloom, I Think Of The Moon.’

Moonshine is a historical story set in the Joseon era when the consumption of liquor was banned by the strictest alcohol prohibition law. The kdrama revolves around Kang Ro Seo and Nam Young. Kang Ro Seo is a former aristocrat who makes alcohol to support her family. Nam Young is a young inspector who wants to revive his family’s fame! Also, The tale introduces crown prince Lee Pyo and a noble lady, Han Ae Jin. After an unexpected event, all four get entangled and embark on a hilarious action romance ride while hiding a secret! And thus, Moonshine posters have flawlessly imprinted different shades of all characters, making you fall in love with them!

On 10 December 2021, KBS has released a behind-the-scenes video of their upcoming drama Moonshine. The beginning of the video shows Yoo Seung Ho being mischievous with Lee Hye Ri while helping her create a perfect posture. Initially, it reveals how playful the cast members are getting behind the camera. During the solo shoot, Yoo Seung Ho acts comically by posing a drinking look and then asks staff to edit it beautifully. Still, he is able to look handsome in that dark navy, black magistrate attire. Lee Hye Ri is also no different. She shows off her naughty gene in a beautiful pink hanbok which gives a distinct glow to her face! Her cuteness during the poster shooting will make you watch the kdrama Moonshine.

Then comes Byeon Woo Seok, who plays Lee Pyo’s role. He lightens up the whole atmosphere of the set by showing off his mischievous side to bring laughter. Kang Mi Na also perfectly shoots, delivering elegant noble lady features. Her gracefulness is beautifully portrayed.

Finally, the time comes for group poster making of Moonshine! Placing four mischievous kids together turns the whole set into chaos due to their brighter features and adorable chemistry. Byeon Woo Seok does not even lose any chance to tease Yoo Seung Ho, showing sweet bonding between the two. Thus, during the group poster shooting, Yoo Seung Ho suffers the most! However, all four casts have wonderfully portrayed their characters.

Lastly, the video reveals the sweet chemistry between Yoo Seung Ho and Lee Hye Ri during the couple poster making. It shows how hilarious yet romantic on-screen bonding we will see in Moonshine Korean drama. Also, the poster clearly reveals the comical scene Moonshine will present. While the two leads pull off each other legs, Byeon Woo Seok does not miss a chance to capture that moment on his phone. Indeed, Yoo Seung Ho suffers the most because even Lee Hye Ri doesn’t miss an opportunity to tease him! Overall, Moonshine poster-making behind-the-scenes video presents a pleasant atmosphere the cast brings, making the filming more lovely! Check out the poster-making video below.

Recently, Yoo Seung Ho has expressed his thoughts about the upcoming kdrama Moonshine. He stated that it was the first historical drama after ‘Ruler: Master of the Mask.’ Still, it was nerve-breaking for him. However, thanks to his co-star, Lee Hye Ri, the shooting set was full of laughter as they had a lot of fun! So Seung Ho even praised Lee Hye Ri’s acting, saying she’s the essence of Kang Ro Seo. Furthermore, their romantic and emotional scenes are delivered flawlessly because of Lee Hye Ri’s outstanding acting.

It seems due to Lee Hye Ri’s radiant energy, the shooting set was full of positive vibes as the cast helps each other during their rehearsal times. With the closing comment, Yoo Seung Ho expressed that hopefully, people will remember Moonshine as a drama that gives off vibes to meet-ups for drinks with your loved ones. It remains a happy memory even after time passes.

‘Moonshine’ Korean drama will be released on 20 December 2021 on the KBS channel. Don’t forget to mark the date and hop on this hilarious, crazy ride with Yoo Seung Ho and Lee Hye Ri!

Also Read: tvN’s Bad and Crazy: Everything You Need To know

Will Young Eun & Jae Guk Give Up On Each Other In ‘Now, We’re Breaking Up’ Episode 11?