While Han Ae Jin confesses her feelings to Lee Pyo, Kang Ro Seo cut off all ties with Nam Young. Each one of them carries out a separate mission. How will love blossom amid the mess of mistrust? 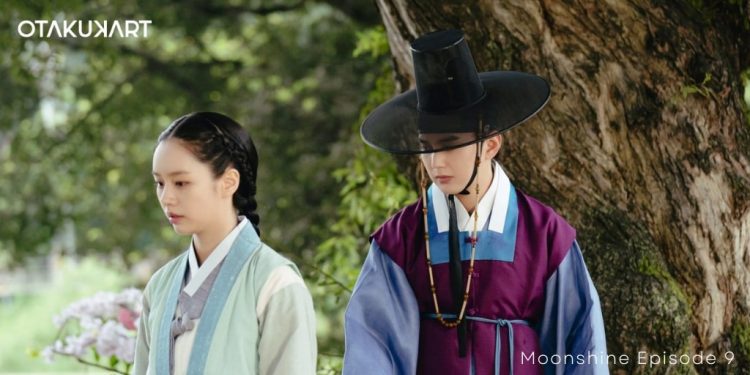 Moonshine Episode 9 will narrate a sweeter chapter of Kang Ro Seo and Nam Young’s love tale! The latest episode shows that the rift between the leads is increasing. However, their feelings for each other are also growing despite their countless attempt to ignore. But then again, before their love fully blooms, both will have to pass the upcoming test. After all, Nam Young and Kang Ro Seo are walking two different paths. Whereas Nam Young is determined to stop the alcohol selling business, Kang Ro Seo’s completing her deal with Woon Sim.

Although Kang Ro Seo’s plan faces a new obstacle with Han Ae Jin finding their secret, it continues without further hindrance when Ae Jin joins their team. Of course, there is a price, delivering her love letter to Lee Pyo. Lee Pyo, who receives the letter, misinterprets it’s from Kang Ro Seo, only to later discover that the real owner is Han Ae Jin. Although Ae Jin confesses her feelings, Lee Pyo straightforwardly rejects her proposal stating he harbors feelings for Kang Ro Seo. Even while going through her first heartbreak, Ae Jin tries to save Ro Seo when she learns that her father has found their secret, improper use of his permit.

On the other side, Nam Young faces Merchant Sim while reinvestigating the culprit of the wood ice storage incident. Thankfully, at the last moments, Kang Ro Seo saves him! Thus, find out how Kang Ro Seo and Nam Young crush their enemies in Moonshine Episode 9!

What To Expect In Episode 9 of When Flowers Bloom, I Think Of The Moon?

The preview of Moonshine Episode 9 is bringing a new sweet twist in Kang Ro Seo and Nam Young’s love story! Therefore fans should get ready for a romantic confession scene which we all have been waiting for ages. The latest episode ending shows that Kang Ro Seo saves Nam Young from Merchant Sim’s gangsters. Although they have escaped from their enemies, the danger is not over yet. The preview reveals Merchant Sim will go all the way to find the Kang Ro Seo. First, they will capture Cheon Geum and Chun Gae, which will lead them to Kang Ro Seo. However, it is not disclosed whether or not Merchant Sim knows Kang Ro Seo being that sneak alcohol seller he has been searching for.

With Kang Ro Seo in Merchant Sim’s hands, Cheon Geum will immediately reach Nam Young. After all, Nam Young knows where to find Merchant Sim as well as knows how dangerous he can be. However, he will not be alone in this battle. Our sweet-talker second male lead, Lee Pyo, will also join him to save his love. The preview displays that a fight will break in front of Mangwol Temple. The previous episode has uncovered Nam Young’s childhood is connected to the slaughter which happened years ago at the Mangwol Temple and Merchant Sim seems to link to it. Therefore, while trying to save Kang Ro Seo, Nam Young will battle against Merchant Sim’s gang. During the fighting, he will see another flash of the past.

With the enemies surrounding them, Kang Ro Seo and Nam Young will fall into their trap. Therefore, fans should prepare for blasting action in the upcoming episode. However, no matter what obstacle comes, Nam Young will not leave his love and finally confess his feelings in Moonshine Episode 9!

Moonshine Episode 9 will be released on 17 January 2022 at 9:30 pm KST on the KBS2 channel. With the enemies coming from all directions, Kang Ro Seo and Nam Young will face new threats! How will they confess their love amid this political struggle of royal subjects? Will their love overcome these obstacles? Or will they be overthrown by the upcoming risk? Watch every new episode of Moonshine Korean drama every Monday and Tuesday to know how this sweet tale continues amid the royal political struggle.

When Flowers Bloom, I Think of the Moon is broadcasting on the KBS2 network at 9:30 pm KST for South Korean viewers. After broadcasting, Moonshine kdrama will be available on Wavve (accessible only in South Korea). On the same day, the episode will drop at 6 pm in India, 11:30 pm in Australia, 7:30 am in the USA, and 12:30 pm in the UK. It is also streaming on Rakuten Viki and Kocowa with English Subtitles for international fans. 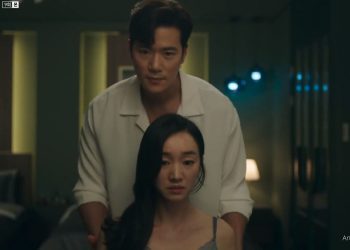