How will Nam Young and Kang Ro Seo's love story move forward with their past entangled? Or are they meant to live apart despite their undeniable sparks? 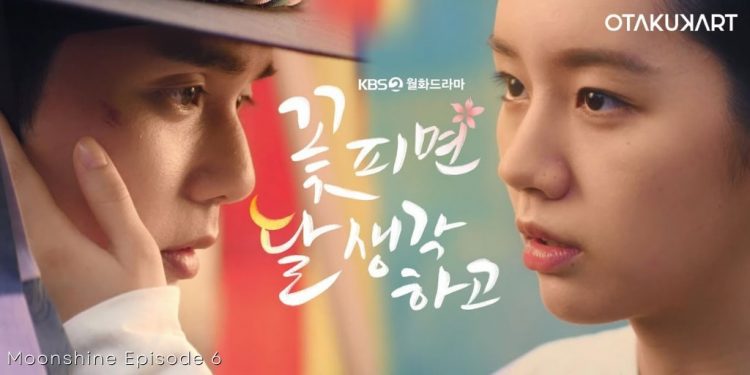 Moonshine Episode 6 is releasing soon! However, the story has made many fans curious about the upcoming part. Finally, some twists and turns have happened, making it more interesting, especially Nam Young’s past memories and Lee Pyo’s past incident. Even the comedy part makes each episode more hilarious. The main credit goes to Yoo Seung Ho and Byeon Woo Seok’s on-screen bromance! After all, their childish quarrels bring another charm to this historical drama. However, they shine brighter along with the comedy diva Lee Hye Ri! No one can deny their chaotic trio chemistry!

Besides the trio’s chaos, the story has progressed a little by giving a glimpse of the past incident. It seems Lee Pyo, Nam Young, and Kang Ro Seo’s childhood parts must be connected. Whereas Lee Pyo goes through agony for losing his beloved hyung (brother), Nam Young suffers from some childhood trauma, which seems to relate to physical sword fight. Kang Ro Seo’s father making alcohol is the only part that has been shared, but there must be something more to it. With their past entangled, their present will lead to a more complicated future as the love blooms in their lives. Therefore, fans should get ready to witness romance between the adorable Yoo Seung Ho and Lee Hye Ri in Moonshine Episode 6!

What To Expect In Ep 6 Of When Flowers Bloom, I Think Of The Moon?

When Flowers Bloom, I Think of the Moon Episode 6 will show how romance blooms in Nam Young and Kang Ro Seo’s lives! We already know that Kang Ro Seo has begun to draw to Nam Young and Nam Young is no different. However, constantly remembering his father’s last words of not getting involved with the low-class people seems to create walls around his heart. How long can he keep with those walls? Because it shows that Kang Ro Seo is breaking those walls one by one and creating a sweet spot inside his heart. Therefore we may soon witness the first kiss of this comical pair!

Besides the main couple, the second leads, Lee Pyo and Han Yae Jin, also have adorable chemistry. With their mischievous personalities, the two will definitely be favorites among fans. Hence, the upcoming episode will also show how they present their love story. However, there are some other problems as well. Kang Ro Seo and her squad will be facing the notorious night market leader, Merchant Sim, and Gye Sang Mok. Unlike Gye Sang Mok, Merchant Kim appears more dangerous but, he is not the main mastermind! There is someone else who wants to dominate the alcohol market. That person must be from the royal court! Who could it be? Find out how Nam Young and Kang Ro Seo overcome this unknown danger in Moonshine Episode 6!

Moonshine Episode 6 will be released on 4 January 2022 at 9.30 pm KST on the KBS1 channel. Finally, the story has revealed some hints about what happened in the past. From those little fragments, it clearly shows that Nam Young, Lee Pyo, and Kang Ro Seo’s lives must be connected! Besides, at the present time, the trio creates unbeatable comical chemistry! It will be great if they overcome this love triangle phase and show fans their endless charms as a chaotic trio! Also, the second female lead, Han Yae Jin, has already fallen in love at first sight with Lee Pyo. The chaos will be on a whole new level if Yae Jin joins them as well! Thus, to know how this romantic comedy tale from the strictest alcohol prohibition era heads, watch every new episode of Moonshine on Monday and Tuesday. Each episode runs for 70 minutes.

South Korean viewers can watch Moonshine kdrama on the KBS1 network at 9.30 pm KST. Later, it will be available on Wavve. It is an online platform accessible only in South Korea. The episode will be out on the same day at 12.30 pm in the UK, 7.30 am in the USA, 6 pm in India, and 11.30 pm in Australia. As for global fans, When Flowers Bloom, I Think of the Moon Korean drama is streaming on Rakuten Viki with English Subtitles.