Nam Young and Kang Ro Seo's love is ready to blossom. However, the danger lurking over them is still not over. How will they protect their loved ones amid the power struggle? 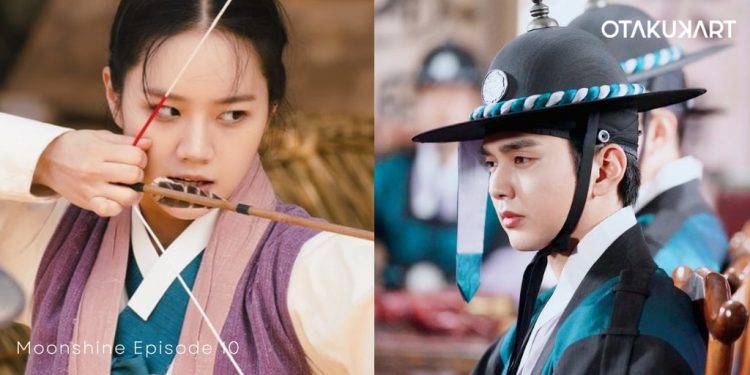 Moonshine Episode 10 is coming soon with a sweeter chapter to make your day special. Finally, the leads have confessed their feelings. This game of push and pull is finally over. Therefore, we will see some romantic moments with Lee Hye Ri and Yoo Seung Ho’s lovely chemistry making it more heart-fluttering. However, it seems their love will have to face the upcoming troubles that will test them and their trust. It will be interesting to watch what Nam Young will do after finding Kang Ro Seo’s alcohol-making business. Will he turn a blind eye to her act? Or will he punish her according to the law?

The latest episode has revealed how Woon Sim has tricked Kang Ro Seo and Dae Mo about Gye Sang Mok being the killer of Dae Mo’s son. At the same time, she even deceives Gye Sang Mok by sending false invitations, which eventually leads him to Kang Ro Seo. He offers a heft amount for her alcohol. It is all Woon Sim’s plan so Kang Ro Seo can continue brewing liquor and she can get out of Merchant Sim’s threat. However, Merchant Sim is more dangerous than we may think. Although he is doing all the dirty work, the mastermind is someone else from the Royal Court. Thus, Moonshine Episode 10 will reveal how Nam Young and Kang Ro Seo face the upcoming threat!

What To Expect In Episode 10 Of When Flowers Bloom, I Think Of The Moon?

The Korean drama Moonshine Episode 10 will show the adorable chapter of Nam Young and Kang Ro Seo’s love story. Finally, Nam Young has confessed his feelings but, the obstacles in their sweet tale are not over yet. Nam Young and Han Ae Jin’s marriage is one of the biggest hindrances. However, now both will find a way to get out of this political marriage. After all, Chief Royal Secretary has already put a seed of greed in Han Ae Jin’s father’s mind by indirectly mentioning the possibility of her being the Crown Princess.

Besides the main couple, our lovely second lead couple will also have to pass the test. Although Han Ae Jin loves Lee Pyo, Lee Pyo’s love for Kang Ro Seo is undeniable. Maybe after witnessing Nam Young and Kang Ro Seo’s love affection, Lee Pyo gives up. It will be a good opportunity for Ae Jin to win over her love. It will be great if they all get back with their partner and come back as the most chaotic squad of this historical tale. Whenever they all four together, a pile of laughter is bound to happen!

While love blooms in their lives, the troubles’ coming their way. After knowing Kang Ro Seo and Nam Young’s connection, Merchant Sim will use it to his advantage and get back on them with his next plan. After all, he has already been ordered to kill Nam Young. Although the leader’s face is not revealed yet, there is a high chance Chief Royal Secretary is behind this chaos. It seems Kang Ro Seo’s father, Lee Pyo’s brother, and Nam Young’s mother’s deaths are connected. Maybe the killer is only one person.

It may seem Merchant Sim is the only enemy. However, the reality is different. After all, Merchant Sim, Woon Sim, and even Chief Royal Secretary are hiding their real faces under the mask of hypocrisy. Therefore, our chaotic squad will lead their way with the troubles chasing after them in Moonshine Episode 10!

Moonshine Episode 10 will be released on 18 January 2022 at 9:30 pm KST on the KBS2 network. The latest episode has shown Kang Ro Seo, and Nam Young don’t have only one enemy. With Woon Sim’s wicked scheming, they will have to face threats in the future. However, will they be able to detect foes from friends? Or will they fall into the enemy’s trap? Watch new episodes of When Flowers Bloom, I Think of the Moon every Monday and Tuesday to find out how Nam Young and Kang Ro Seo protect their loved ones.

For domestic viewers, Moonshine Korean drama is airing on the KBS2 channel at 9:30 pm KST. After its airing, it will be available on Wavve (accessible only in South Korea). The kdrama will be out on the same day at 7:30 am in the USA, 12:30 pm in the UK, 6 pm in India, and 11:30 pm in Australia. When Flowers Bloom, I Think of the Moon is also streaming on Kocowa and Rakuten Viki with English Subtitles for global viewers.