The love story between an inspector and an alcohol seller is ready to unfold during the strictest alcohol prohibition era. Get ready to witness this romantic historical ride with charming Yoo Seung Ho and comedy diva Lee Hye Ri! 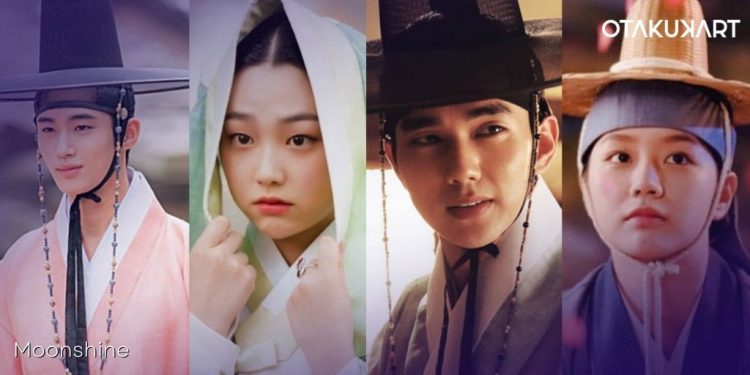 Finally, Moonshine Korean drama has introduced a hilarious chaotic trio with its rom-com storyline! Although it is great to see Yoo Seung Ho and Lee Hye Ri’s on-screen chemistry, which is worth watching, Yoo Seung Ho and Byeon Woo Seok’s bromance make the drama more mirthful due to their childish quarrels. Then there is Kang Mi Na, who has shown a mischievous side since her first encounter with Lee Hye Ri. We have not seen all four in one scene except during their poster shooting time. But it will be super chaotic once they all come together, filling this historical tale with waves of laughter!

The Korean drama ‘Moonshine,’ which is also known as ‘When Flowers Bloom, I Think of the Moon,’ is directed by Hwang In Hyun and written by Kim Joo Hee starring Yoo Seung Hoo, Lee Hye Ri, Byeon Woo Seok, and Kang Mi Na. The drama is set in the Joseon era when alcohol consumption was strictly banned. During such a period, an ex-aristocrats but poor woman decides to make and sell liquor only to get caught by a prohibition inspector! How will love blossom when the two are polar opposite? Or will it lead to a new hilarious ride with dangers coming from all four directions?

Plot Summary Of When Flowers Bloom, I Think Of The Moon

The drama is set during the Joseon period when the strictest alcohol prohibition law has been enacted. It follows Nam Young and Kang Ro Seo’s lives. Nam Young comes to Hangyang to gain fame. Thus, after passing the civil examination, he begins working as an inspector. Meanwhile, Kang Ro Seo is a poor noblewoman who works day and night to earn money. However, after finding her brother’s debt, she starts brewing alcohol.

On the other hand, crown prince Lee Pyo is ready to jump the palace’s walls to drink a drop of alcohol. Han Yae Jin is a playful noblewoman who wishes for a handsome husband. Unexpectedly, all four cross paths creating historical chaos. But how will Kang Ro Seo continue her alcohol selling business when the prohibition inspector living at her house?

Besides the main lead and comedy team, the antagonists’ list is pretty long. It consists of Jang Gwang as Chief State Councilor Yeon Jo Moon, Choi Won Young as Chief Royal Secretary Lee Shi Heum, Moon Yoo Kang as Merchant Kim, Hong Ahn Pyo as Gye Sang Mok, Park Ah In as Woon Sim, and many more. With such an amazing casting, ‘When Flowers Bloom, I Think of the Moon’ narrates a rom-com historical tale with the perfect touch of suspense and action to make your Monday-Tuesday fill with laughs!

The kdrama When Flowers Bloom, I Think of the Moon has taken KBS2’s Monday and Tuesday time slots. KBS2 has scheduled the drama for 16 episodes, where each episode will broadcast for 1 hr and 10 min. However, keep note that due to various emergency situations or technical issues, changes may happen in the schedule. So here is the episode schedule of Moonshine Korean drama as per the given time slot:

The Korean drama Moonshine was premiered on 20 December 2021 at 9.30 pm KST on the KBS2 channel. The historical drama has caught viewers’ attention with its comical duo Yoo Seung Ho and Lee Hye Ri. Also, the comedy and thrill of the storyline with a glimpse of the past have made it more interesting. It also seems love has taken place, and thus, we may shower with romantic scenes between Nam Young and Kang Ro Seo soon! So don’t forget to mark the date and watch When Flowers Bloom, I Think of the Moon kdrama!