Still From The Official Trailer Of Monday Featuring Sebastian Stan as Mickey And Dennis Goughe As Chloe (Credits: IFC Films)

So we see a different Sebastian Stan apart from his regular Marvel work for The Winter Soldier. Gosh, he is so amazing. Then you add Denise Gough. We get more brilliant chemistry.  Well, let’s take a look at Monday, directed by Argyris Papadimitropoulos. A Film chronicling emotionally destroyed individuals finding life in each other trying to start over again. Since its screening Toronto International Film Festival as part of TIFF Industry Selects. it’s one of the quite awaited films. There are quite a fairy tale elements going off against the reality of life kind of thing. That’s what we got the vibes from the trailer.

Monday follows the story of a couple played by Sebastian Stan and Denise Gough. A one-night stand becomes love at first kind of thing, making it turn into something beautiful. So anyway, here we are taking a look at the film and our thoughts revolving around its storyline, characters, pace, and all the good and bad aspects of the film. 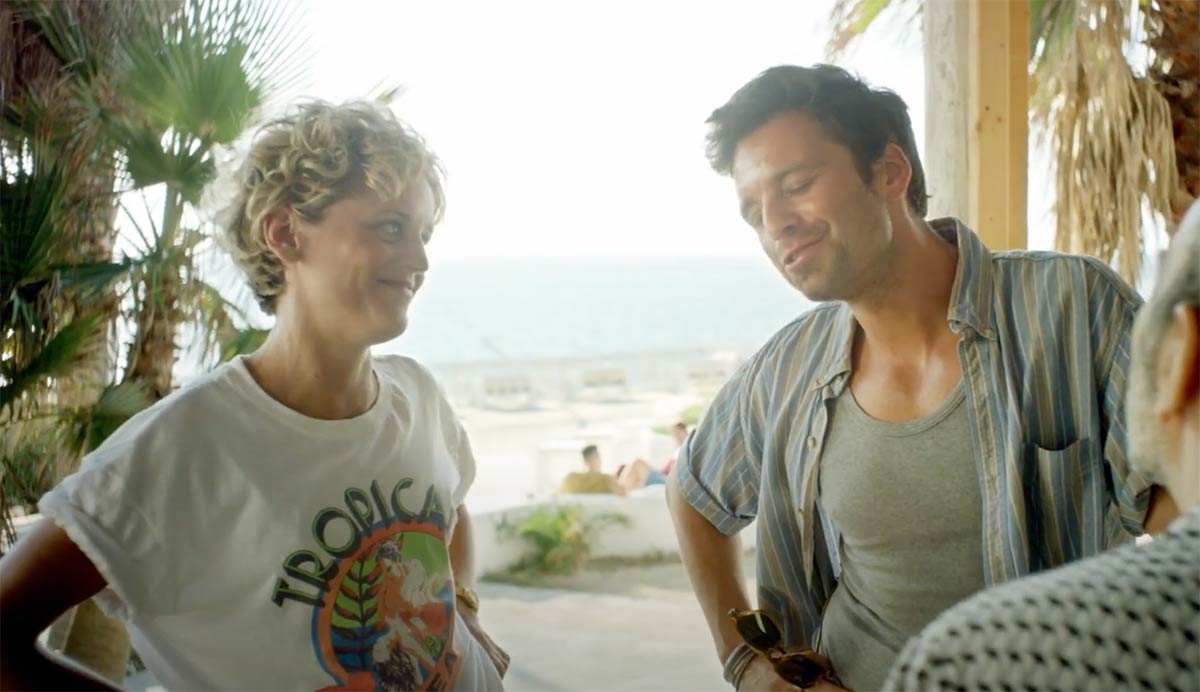 Monday sees Mickey played by Sebastian Stan, a charming DJ living in Greece for seven long years. Living the time of his life hiding away in pain. Until he bumps into Chloe at one party, and both instantly get each other. Chloe is an American lawyer spending her last weekend in Greece planning to go back to the states. After getting caught naked by the police on the beach to trying to get back home. The couple takes a shot at each other to get to know more about each other. Plus, of course, have sex here and there, which is quite constant throughout the film.

Getting to know each other reveal the dark secrets both are accompanying behind their energetic persona. As they try to get away from it, they find a home in each other somehow. Still, it doesn’t change the mind of Chloe about going back to the US. Until, much like a fairytale dream, Mickey comes running to the airport to get her back.

What follows is the perfect example of a budding adult relationship. All the ups and downs and what it means to be together. What it means to build something together. Accepting new people in your life, adjusting for each other, facing the monstrosity and of course loving the heck out of each other until further life.

Let’s start by talking about the storyline of the film and how it builds our characters. The first 30 minutes of the film does a brilliant job of introducing the audience to what Mickey and Chloe are. Let it be their backstories, their accidental love, or their energetic persona. The depth is there, and they are something the audience clicks with. Plus, they are clicking with characters like these for a long time. Well, haven’t you heard the story of two devasted trying to cope with life individuals falling for each other? The basic plotline has been a mainstay for years. Monday just brings the mature heck of it. And, Of course, the pace is quite fast. So it’s not like the movie will make you wait much longer.

Still From The Official Trailer Of Monday Featuring Sebastian Stan as Mickey And Dennis Goughe As Chloe (Credits: IFC Films)

Talking about the performances of Sebastian Stan and Dennis as the couple. Gosh, they fit in together so beautifully. Brilliant performances accompanied by incredible chemistry. Probably their chemistry is the standout part fro the film. The one aspect that defines what Monday is. Following the main characters, the latter half of the film continues the exploration. New characters join in shaping the couple’s life. The conflicts, disagreements, and acceptance all build up a film and couple’s story. Yes, the supporting characters stood out as well.

Ignoring the cliches, which were obviously part of a story we have seen for years. There is a sense of depth showcasing different stages of a mature relationship owning to each Friday as portrayed by the director. Basically, a love, at first sight, spawned out of attraction, from being successful to a loser but still being there for each other and going ahead.

If you want, Monday could turn out to be a great weekend watch. With stellar performances and a mature storyline, it is accompanied by beautiful scenic views of Greece. Hats off to the cinematography as well, that stayed in with the character’s story. You can buy the film right on Video-on-demand services such as Amazon Prime Video, VUDU, and Itunes.