With the dazzling beauties and enchanting melodies, MOMOLAND's preparing for a comeback with Natt Natasha in January 2022. 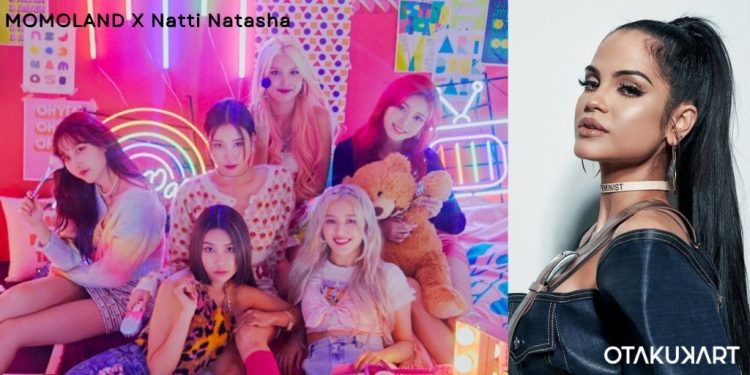 Fans should get ready because MOMOLAND’s preparing to make a comeback in January 2022! Finally, a year-long waiting of merry-go-rounds (MOMOLAND’s fans) will be over in a few days! The six-member kpop group has made their fans wait for a little longer this time. But it seems this waiting torture will be worth it in the end! Because it will not be only a simple comeback but also a blasting return with a collaboration to expand their international fanbase! It seems MOMOLAND members were working for this upcoming track which will reveal their different shades.

The South Korean kpop girl group ‘MOMOLAND’ consists of Ahin, Jane, JooE, Hyebin, Nancy, and Nayun. The group was formed through the 2016 reality show called Finding Momoland. The kpop group debuted with the mini-album ‘Welcome to Momoland’ in November 2016. Since then, it has gone through various line-ups. Whereas new members joined the group while some also left the band. However, the remaining members continue their passion for music. They have released numerous music pieces, such as Bboom Bboom, Baam, I’m So Hot, Banana Chacha, Thumps Up, and many more. Also, this year MOMOLAND’s making a comeback with its upbeat music, stunning visuals! So fans should look forward to their new collab, which will make fans go wild!

Also Read: Kpop Idols Born In January- Know About Them

On 28 December 2021, a report from MLD Entertainment had announced that MOMOLAND would be making a comeback on 14 January 2022 with new music. However, who would have thought it would be a super exciting collab with Dominican singer Natti Natasha? It’s a huge surprise for MOMOLAND’s fans! It’s not their first collab work. Previously, the kpop group had collaborated with South Korean singer Psy in 2020 and with CHROMANCE in 2021. Therefore, this year, MOMOLAND’s preparing to make a comeback with Criminal’s Natti Natasha to expand their international base.

A few days ago, the news about MOMOLAND’s comeback, including collaboration with Natti Natasha, had come out. As per their schedule, the comeback song will be out on 14 January 2022. Expect the release date, no further information about the collaboration was announced.

Finally, on 5 January 2022, at midnight, KST MOMOLAND unveiled their releasing schedule for ‘Yummy Yummy Love,’ which is their upcoming collaboration song with Latin American singer Natti Natasha. According to the provided schedule, MOMOLAND will release the new song ‘Yummy Yummy Love’ and its music video on 14 January 2022 at 10 am KST.

Besides the comeback release date, MOMOLAND will also share concept photos on 6 January, 7 January, and 8 January 2022. From 9 January to 11 January 2022, visual films will uncover, and on 12 January and 13 January 2022, the group will drop MV teasers. Thus, let’s take a look at the stunning individual teaser images of Yummy Yummy Love.

Finally, the teaser images for MOMOLAND’s Comeback collab with Natti Natasha’s Yummy Yummy Love are out! On 6 January 2022, individual teaser images of MOMOLAND members and Natti Natasha have been revealed, which will make you astonished with their breathtaking beauties! In the individual teaser photos, all members, Ahin, Jooe, Hyebin, Nayun, Jane, and Nancy, show off their boldness with their charismatic appearance. Even Latin American singer Natti Natasha flaunts her beauty with a sharp yet soft gaze which is really to kill you with her hot Latin melody!

The upcoming track ‘Yummy Yummy Love’ will be Natti Natasha’s first collaboration with a kpop group. Natti Natasha is a famous American Latin female singer who has paved the way for women in Latin music. She has also worked with various international artists such as ‘Te Lo Dije’ featuring Brazillian singer Anitta, ‘Soy Mia’ featuring Peurto Rican singer Kany Garcia. Her collaboration with the Jonas Brothers, Daddy Yankee, and Sebastian Yatra on the song ‘Runaway,’ ‘Criminal’ with Ozuna, ‘Sin Pijama’ with Becky G are her famous music pieces.

Although Natti Natasha has worked with various music powerhouses, it will be the first time working with a kpop group. Therefore, fans should get ready to witness MOMOLAND 2022 Comeback with Dominican singer Natti Natasha! This collab will shake the world with their powerful comeback. So don’t miss out on it!