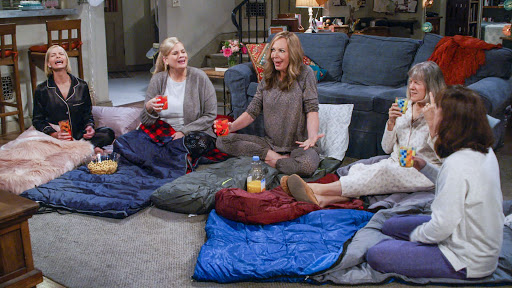 There are a lot of parent-child flicks in the entertainment industry right now but none of the sitcoms compare to what Mom, as a show, has to portray. In this series, we are provided with the story of how a mother and her daughter go through various phases and difficulties that life has to offer and this just resembles most people’s lives right now and thus, is very popular. The show, Mom, started siring on CBS back on the 23rd of September 2013. Chuck Lorre as well as Eddie Gorodetsky along Gemma Baker have worked in unison in order to create this show. The eighth installment dropped on the network recently on the 5th of November 2020. Unfortunately, the story that we all love so much is soon to end. It is declared by the creators on the 17th of February 2021 that the eighth season of Mom is going to be it’s last.

As for the plot of the show, it is set in Napa County located in California. The duo of daughter and mother employed in this story is pretty dysfunctional. The entire spotlight is thrown on Bonnie Plunkett as well as Christy. Both these women were struggling with addiction for years and they even were estranged. But at one point in time, when all of the chaos in their lives got too messed up, the duo decided to move on in a better way. As it so happens, that Christy and Bonnie decide that they will stay sober from now and are also going to attend Alcoholics Anonymous. Also, this is not just any regular sitcom that we see on television.

The show was actually filmed in front of a live audience while its production has been carried on under the banner of Warner Bros Television as well as Chuck Lorre Productions. Till now, we have had seven installments for the show and currently, the eighth one is running right now. Through the course of these years, we have seen how popular Mom has got while receiving appraisals from the critics as well as the audience. Mostly, the viewers have been in an awe of the script for the show while the character performances have also been appreciated. The thing that people liked the most about this series that it is not afraid to showcase the issues that are faced by people in real life.

Recently, in the show, we have seen that Bonnie has been working on a line of mocktails as she tries on different blends before getting the perfect one. But one day, she finally gets the match for the bar owned by Adam. Then we have Jill whose heart is fluttering right now. She is slowly falling for the therapist that Bonnie sees. Back in the tenth episode, we witnessed that Bonnie and Adam get interrupted while they are at their dinner. Also, Wendy now has a new relationship about which no one can stop talking about. Mom season 8 episode 11 is called Strutting Peacock and Father O’Leary and is supposed to release on the 11th of March 2021. In this episode, we will see that Bonnie is pretty bummed out. Actually, Bonnie will get hurt when she finds out that the new sponsee has received real inspiration from Adam and not her.