Miraculous Ladybug Season 5: Should We Expect Another Run?

Miraculous: Tales Of Ladybug & Cat Noir is one of the popular cartoons under Disney+. 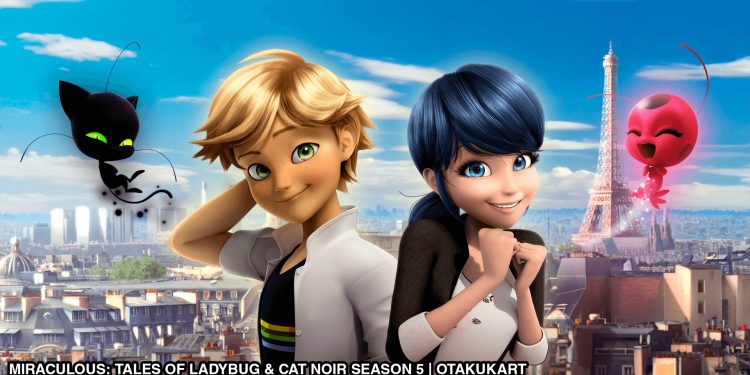 Miraculous: Tales of Ladybug & Cat Noir is also popular as Miraculous Ladybug. When it comes to this series, it is one of the favorites and popular cartoon shows. Because of its quirky storyline, children tend to resonate with the concepts of this program. It rose to prominence, and this led the creators to come up with four seasons of this show. Thus, people are waiting to know more about season 5 of Miraculous Ladybug. Before making an official debut, the show had its first premiere in South Korea. Because of its popularity, Disney took this show under them till 30 September 2020.

This went around from 2016 to 2020 until it was officially taken over by Disney+. Little did you know that the whole concept was made by a french writer, Thomas Astruc. From a very young age, Thomas wanted to become a comic book writer, and so did he. One day he came across a stranger with a ladybug print on her t-shirt, and that’s the exact way he got this cartoon’s idea. And now the show has become pretty popular, and that’s the main reason that fans are having a high level of interest in watching season 5 of the popular cartoon Miraculous Ladybug.

The story surrounds the life of two high school teens, Marinette and Adrien, who had dreams of becoming superheroes in Paris. With time, they became Ladybug and Cat Noir. This unexpected turn in their life gave a huge blend of events, and it’s fun to watch this. Together they beat up several villains as a team. Moreover, they travel around in different adventures. This cartoon surely gives off knowledgeable information to all its fans, specifically to the kids. The main reason behind their powers is all the magical jewels they’ve been using to get a hold of their mystical powers.

Moreover, they don’t usually use their powers. Both of them directed their powers against all the evil forces. Amidst all the other villains, their main villain is Hawk Moth. And guess what? He can steal powers, and he also tries to do the same with these superheroes as well. And together, they are stuck in huge problems because of all the negative energies directed by the supervillain. They frantically try to defeat him. Both of them have individual wishes like normal human beings. Marinette wants to become a fashion designer. But little did she know that the Ladybug would have powers like this to save the world.

Moreover, many parents took their views to social media and talked about all the favorite experiences that their children went through. Most of them liked the point that this cartoon didn’t highlight violence or dark themes. The creators of this show made sure that children wouldn’t have to delve into the kind of themes that would affect the innocence in their minds. The creators used a wide range of colors and vibrant surroundings to generate major interest. But still, the story is pretty confusing for the children who are too young to understand the concepts and storyline proceedings.

Well, the third season begins with Master Wang Fu and his illness. And he always wanted to convey his feelings to his long-time love Marianne. But our Ladybug accidentally swaps the letter with the one she wanted to give to Adrien. She feels Fu doesn’t love her anymore. And this gives Hawk Moth a chance to transform her into a hideous monster that is the Backwarder. Yes! She can steal time. Soon things were fine, and Hawk Moth was defeated. On the other hand, Marinette confesses her love for Adrien. But he talks to her nicely and rejects her.

Well, of course, Marinette is extremely disturbed by this. Soon things take a different turn after the arrival of Lila. From the very first day, she wanted to ruin Ladybug’s life. Speaking of Lila, she is an excellent manipulator. Marinette was pretty sure about lies because she could easily strangle anyone in the web of her own thoughts. But soon, Lila chose to be akumatized by Hawk. This transformed her into a Chameleon, a deadly supervillain. Even though she is defeated, things don’t change much. Towards the next episode, the creators make us aware of Marinette’s desperate attempts to keep her away from Kagami.

Moreover, season 3 takes us on a different adventure, wherein our lead characters had to fight with several supervillains like Animaestro, Bakerix, and Silencer. All these powerful antagonists had distinguished powers that could destroy any superhero, from creating characters on their own to a villain who can increase its size by consuming yeast. Moreover, Ladybug and Cat Noir are finally in love with each other, even after their memories are under Oblivio. On the other hand, Kagami’s hate towards Lila and Ladybug allows Hawk Moth to transform her into Oni-chan. But what will Marinette do when she knows that Adrien is in love with someone else?

The fourth season aired on 21 June 2021 in the United States. Moreover, by the beginning of season 4, Marinette has become the Guardian of Miraculous. And it seems things are going pretty well between her and Luka. But her responsibilities often hinder her relationship. And the same is going on with Adrien and Kagami. Both of them break up with their respective partners. Because their emotions turned them into deadly monsters where Luka became Truth and Kagami became Lies. Marinette and Adrien had to choose their responsibilities over their toxic relationships.

Because of the akumatization, Marinette had to confess her secret identity as a ladybug to Alya. On the other hand, Kagami and Marinette have a deep conversation regarding their respective feelings for Adrien. Moreover, Kagami confronts Marinette about her destiny with Adrien. And guess what? Marinette has to give up on her responsibilities as the guardian of Miracle box. Su-han takes away the box after releasing her from her duties. To be more precise, it happened because Master Fu and Marinette broke many sacred rules. But Fu’s agitation transforms him into Furious Fu. But Ladybug and Cat Noir defeat him, which helps her to get back her position as the guardian.

There are around 26 episodes in each season. And it’s the same with the fourth season as well. But the creators premiered episode 20 on 14 November 2021. Well, they have to announce the release date of all the other episodes. Moreover, the storyline is going to be pretty interesting since it will include the Shadow Moth. The titles of these episodes are out, but the dates aren’t. Well, towards episodes 19 and 20, things took a different turn as Ladybug and Cat Noir had to face a newbie villain.

Wherein Bob Roth became Moolak. A powerful villain who can transform people into coins. Moreover, Gabriel reveals his identity, and finally, Shadow Moth is introduced in the story. However, with the Cat Miraculous in his hands, he transforms himself into Shadow Noir. And now they had to get close to him. Marinette conceals her identity as a waiter. And remember! This is a VIP Party. Since Felix discloses Gabriel’s identity as the Shadow Moth, he provides him with a fake ring. But soon, Gabriel gets to know about this and creates a sent monster. But towards the end, Gabriel is still making plans to trap Felix.

Well, when it comes to season 5 of Miraculous Ladybug, there are no confirmations yet. Since Disney + took over the rights of this show, fans won’t be able to watch it on Netflix. It seems like the fifth season of this cartoon will have 26 episodes as well. Season 4 of Miraculous didn’t release the final episodes yet. So it seems that season 5 won’t be coming sooner. Moreover, according to the fans of this show, there are possible chances that the show will premiere in Summer 2022. And guess what? There will be a whole new adventure.

Jeremy Zag revealed that the fans would get to see new villains in the fifth season. Maybe Gabriel will give huge surprises to Marinette and Adrien as Shadow Moth. The best part about this show would be its intriguing features and display of characters. Not only children are fans of this show, but also many adults. The features are definitely attractive and meaningful. Moreover, it is believed that Felix was supposed to be the protagonist of this show, but the creators took a last moment decision to revive the cartoon and its proceedings. This was done to avoid any kind of cliches.

Kaiju No. 8 Announces Hiatus: Here’s When It Will Return?

Nicky, Rebecca and Miguel Are On A Road Trip In This Is Us Season 6 Episode 2