Still from Minions 2 : Rise of Gru

After a long wait of two years, the million-year-old minions are back in action in their animated sequel. Minions 2, also known as Minions: Rise of Gru, is set to hit theatres with its hilarious adventure and perfect comedy timing. The movie was supposed to be released in 2020 but was delayed due to the pandemic. However, Universal Pictures has finally decided to release its most anticipated and well-known animated film this July.

This latest release, Minions: The Rise of Gru, continues the story of Minions and their adventures. It takes us on a trip back in time to the classic era of the 70s, when Gru had just started off with his evil career. This is the origin story of how the world’s greatest super-villain met with the Minions. Despite his small age and appearance, this boy always finds his way into shenanigans. The Vicious 6, a club of villains Gru desires to be a member of, is indeed introduced in the film. Gru interviews to become the Vicious 6’s newest member after the famed fighter Wild Knuckles is fired. 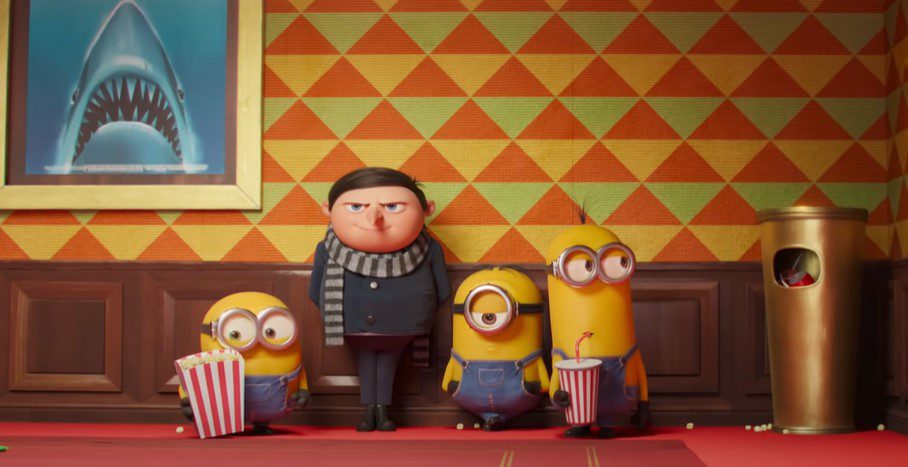 With the last Despicable Me movie, no one would have thought that minions would be brought right under the focus of the camera. No one would like to miss the cute group of these four minions and their mind-boggling antics. The movie is directed by Kyle Balda, with Brad Ableson and Jonathan del Val. Most of us already know them as the directors of Minions and Despicable 3. The credit for its amazing and hilarious story goes to Brian Lynch and Matthew Fogel. This film was produced by Chris Meledandri, Janet Healy, and Chris Renaud, thus giving us this masterpiece.

The Rise of Gru: Trailer Breakdown

After the release of Despicable Me, Gru has turned out to be one of the most beloved cartoon characters of all time. With the release of this movie, the creator wants to highlight the journey of how Gru turned evil. The trailer takes us back to the time when the evil boss, Gru, was just a little kid. It was the time when he had just started plotting how he would take on the world.

Still from the trailer Minions: The Rise of Gru

The coincidental meeting of Gru and the minions ultimately led to this family joining forces. Gru devises a plan to become a well-known villain with the assistance of his newfound band of Minions, led by Kevin, Stuart, Bob, and the newcomer, Otto. This was the start of Gru’s plan to take over the world and design various weapons. All this hard work, just to execute their first super mission of getting into the infamous supervillain supergroup.

Gru above the Vicious 6?

Despite all this hard work, Gru fails to impress the evil bosses of the Vicious 6. The diminutive, small villain finds his way to outsmart and enrage them. Gru steals a precious stone from the gang and therefore claims his victory over them. But to his surprise, Otto, the smallest minion, manages to lose the stone. This got Gru furious, and then he set all the minions on a mission to recover the stone.

In the meantime, Gru is abducted by the Vicious 6, and the minions’ mission shifts from finding the stone to saving Gru. This leads to the hilarious and amusing adventure of the minions in order to save Gru.

Still from the trailer Minions 2: The Rise of Gru

With Gru on the run, the Minions try to learn kung fu in order to save him. During his capture, Gru learns a lesson that even evil folks need a little aid from their pals. The teaser assures us that Minions: The Rise of Gru will be 100% fun, with the franchise’s classic comedy, a touch of vintage artwork, and over-the-top action sequences.