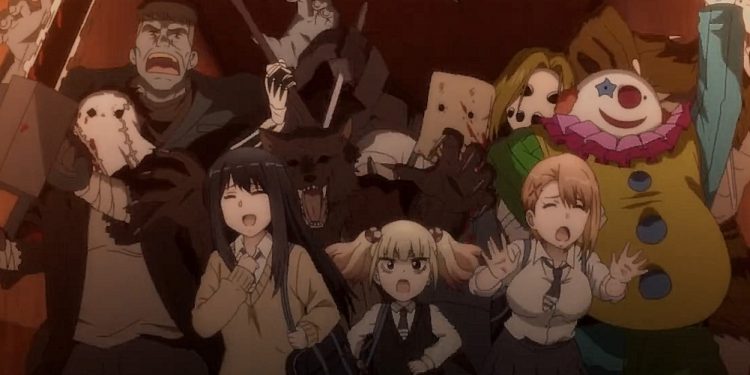 Mieruko Chan Episode 10 reveals the substitute teacher who is possed by evil spirits, and Miko wonders if he is the one. The teacher tells the students that he is taking over Arai’s position since she has taken maternity leave. Miko notices that evil spirits surround the teacher. Mieruko Chan reveals two students who can see evil spirits and learn to exorcise them. From Mieruko Chan’s latest episode, the teacher reveals that his name is Zen Toono, and the students seem to like him. The girls think that Zen is handsome and ask if he has a girlfriend.

Zen ignores them and asks the students who are present to say yes when he calls their names. Hanna thinks that she has seen Zen somewhere and asks Miko if she remembers Zen. The girls want to know more about Zen, and a giant evil spirit appears near the window looking at Zen. After the first period, the students head to have lunch, and Hanna notices that they have prepared her favorite lunch. Hanna and Miko talk about Zen, and Miko thinks that Hanna is confusing Zen with someone else.

Miko knows that Hanna is telling the truth and realizes that she has seen those evil spirits, making Hanna not remember where they have seen Zen. Hanna realizes that she has forgotten to buy her after lunch and decides to head back. But Miko remains to wait for her trying to figure out the mystery behind Zen. She realizes that there is an upcoming Halloween event and sees Zen coming towards her side. Miko noticed that a giant evil spirit was filing Zen. But Zen felt that someone was watching him and looked at Miko, who hides.

Miko arrives at the restroom panicked and wonders if Zen is what she thinks about him. She wonders if she will be ignoring that the whole day. Miko heard footsteps and wondered if someone was following her. She locks herself inside the bathroom, but she gets relieved when she hears the girls’ voices complimenting Zen. The girls left, and Miko saw another giant evil spirit coming from the toilet. Miko wonders if she has let her guard down, but she trembles as she pretends not to see the giant evil ghost.

The giant evil spirit tries to make her get scared, but Miko enters the next room and sees Yulia eating her food. The two walk out together and meet with Hanna at the sports field. Hanna thinks that the bread that she ate tasted different. Miko realizes many scary giant evil spirits, and she must stop getting scared and act as an ordinary girl. She realizes that Yulia can see only the small ones and Yulia if she enjoys eating her lunch at the restroom. Yulia thinks that nothing is wrong with that, and Miko tells her not to eat there.

Hanna tells Yulia to join them every day, and it will be fun. The trio shared their food, and Yulia accept to join them. Miko decided that she had to keep her friends out of danger while solving Zen’s case. The giant evil spirit joins them and comments that the food looks nice. Miko ignores that, and the giant evil spirit gives up and leaves. Later they visit the House of Horrors and Hanna realizes that they get 20 donuts for free when they come out. Miko thinks that if she gets in, it will help her face the evil spirits.

Mieruko Chan Episode 10 will be released on 5 December 2021. Miko, Hanna, and Yulia enter inside, and they face the worst nightmare. Yulia and Hanna are scared, and Miko realizes that is different from what she has experienced. Miko notices that they are not having fun if they don’t scream, and she begins to scream. Let’s look at Mieruko Chan Episode 10 official details.

Also Read: Denki vs Tsubaki In Episode 227 of Boruto: Naruto Next Generations.