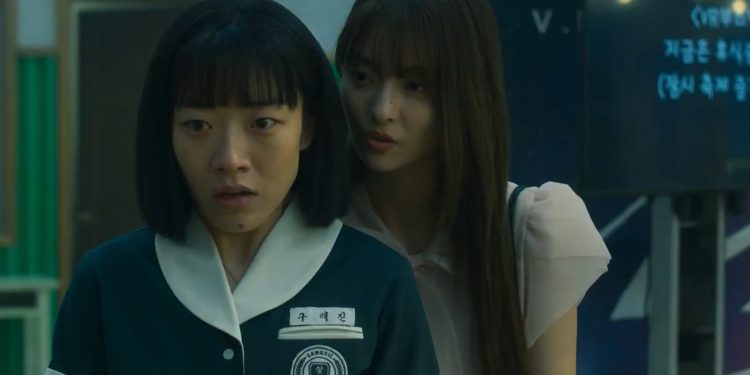 Things will only be getting more difficult for Aejin in Episode 12 of Shadow Beauty. The upcoming episode will show us how Mijin gets more vicious in the chase for what she wants and in protecting herself. Aejin feels anxious and depressed after getting her phone is stolen by Mijin. She knows that if Mijin wants to, she could tell everyone at school about her secret. That would certainly make life at school miserable for her. However, Aejin is not sure if there is anything she can do at all.

As she is struggling, Hoin comes to aid her with information about Mijin’s past. As the two dig deeper into it, they realize that Mijin is more than just a kid who pushes others around at school. Hoin also has some self-realizations in the previous episode, which will help define his character further. Shadow Beauty has received much praise locally. The fans of the webtoon on which the web drama is based were very surprised to see how similar the main character was to the one on-page. They also enjoyed the acting by the leads and considered the drama’ easy to get engrossed in’.

Mijin is gradually becoming unstoppable. With a pretty face and a seemingly kind exterior, she has gotten everything she wanted- and ruined everyone she disliked. How far will she go to protect her lies?

Hoin has an emotional moment

Hoin has clearly been through some tough times. In the previous episode, we get a glimpse of him talking to a therapist. He discusses a time when he considered and attempted suicide by drowning. The therapist encourages him to talk about his feelings more. He gets flashbacks to how he has been mean to his ex-girlfriend ass along. Hoin is taken aback to find himself in tears as he continues talking about his emotions. This scene makes us realize that he has a lot of suppressed feelings.

When Aejin finds out that his phone was stolen by Mijin, she is shaken. Mijin hacks Aejin’s Instagram and posts a selfie of her in their school’s uniform. This dampens the rumors about Mijin not being the ‘real’ Genie and gives her more popularity. When Aejin tries to talk to Mijin about the situation in seclusion, she simply threatens to keep quiet. She asks Aejin who she thinks will get more heat for lying between them both and calls her an ugly loser.

Hoin does not take the back seat despite his own life being a little messy. His breakup with Hanuel leaves him in a place where he is questioning a lot. However, he wants to get to the bottom of the whole situation with Mijin. He dislikes Mijin just as much as Haneul and Aejin do. When he puts his investigative skills to use, he finds out that Mijin has followed this certain pattern of befriending a loner at school and then bullying her more than twice. He warns Aejin of how dangerous Mijin really is, but seems to be hiding part of the information he derives on Mijin from her.

Episode 12 of Shadow Beauty will be released on Saturday, 25 December, 2021. This is the second to last episode of the series. A lot of fans are excited to see who Hoin ends up with as the webtoon based drama’s are having different endings these days.

Where to Watch ‘Shadow Beauty’ Episode 12?

Shadow Beauty is available for streaming on Viki, WeTV, and Kakao TV. The drama will be wrapping up next week. As Mijin seems to have placed herself at the top in the previous episode, all the viewers are wondering how the drama will end.

What to Expect From The Next Episode?

With the series soon coming to an end, there’s a lot of wrapping up to do. In the next episode, we will be able to see Mijin threatening to put Jinsung’s career as an idol on the line if Aejin doesn’t cooperate with her. Make sure to tune in if you want to see what Hoin and Aejin have up their sleeves this time!