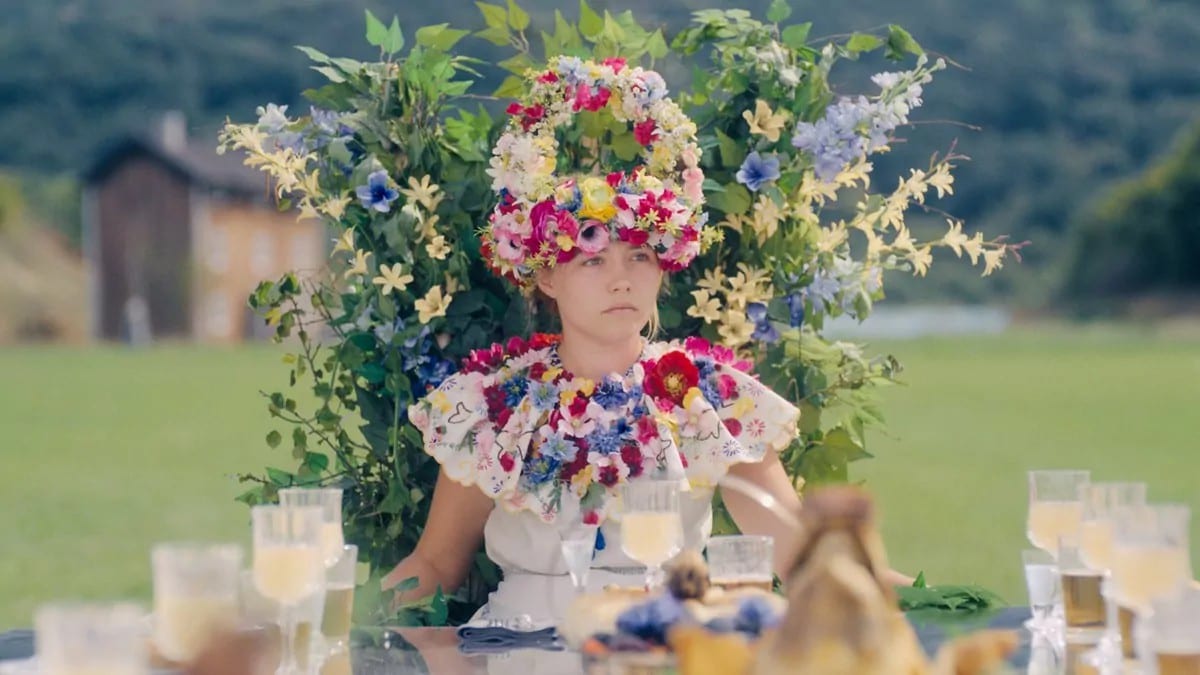 Coming from the man who directed Hereditary, gosh we were all in for Midsommar back in 2019. Ari Aster’s second outing after the creepy and disturbing Hereditary. To be clear, the disturbing element lives on for Midsommar and creepy too but in quite a weird form. A folkish-horror tale that told us about the festival that tends to sacrifice individuals but has quite a weird way to do things. You may agree or may not agree with their rituals but that’s what Midsommar is in for. So with no further adieu here we are getting Midsommar and its ending explained right.

Midsommar stars Florence Pugh, Jack Reynor, William Jackson Harper, Vilhelm Blomgren, Ellora Torchia, Archie Madekwe, and Will Poulter. The film is a co-production between the United States and Sweden telling a Swedish slasher film. Quite a straightforward tale following a group of individuals visiting a place with a culture full of disturbing rituals. As they get to the bottom, it gets darker and leads some to their end. Here we are answering a few questions that may have left you confused towards the ending on your first watch of the Midsommar.

Midsommar opens up to the falling relationship of Dani and Christian. Both are having struggles as Dani is the emotional one, while Christian is sick of the behavior. Chrisitan’s friend’s Mark, Josh, and Pele, advise him to quit the toxic relationship. Pele comes with better advice by offering him to come on a trip to the Swedish Summer festival his family attends. Amidst this, Dani calls and lets Chrisitan know that her sister suffering from Bipolar has killed her parents and herself.

Chrisitan, in a rush, returns home to comfort his love Dani but when she finds out about his trip. This causes a tiff until Christian advises her to come along to recover as well. Dani coming makes Pele happy, who tells her about a ritual called May Queen where women compete in dancing. Pele’s sister won last year, and he hopes Dani wins this year. Amidst this, he also mentions his parents getting burned alive.

The trip begins and upon reaching the place called Hälsingland and meeting the Harga community. They are joined by an English couple as well. The visitors are treated with a mushroom tea, as in drug. What began looking like a beautiful ritual with all-white color and unique structures and dances turned into one of the most disturbing to look upon. From a drug tea to killing two people when turned 72 years old, the place just levels up its problematic rituals step by step. While some try to leave and try to investigate, they all meet their end with a lie and are supposedly killed. Let’s find out what happens towards the ending of Midsommar.

The Harga Community Makes Their Moves

Towards the ending of Midsommar, most of the characters meet their end. First, the English couple tried to leave. Then Mark was guided by a beautiful girl. Why? Because he pisses on an ancestral tree of the place where people’s burnt ashes are put into place. Josh, who was writing a thesis on the place and studying this place’s Holy book, was advised not to take photos. But he tests to limits which lead him to his end. This is especially true when a man disguised as Mark comes to meet him, but his face was just a mask. The community hides all these disappearances by lying.

Meanwhile, Dani joins the woman in the May Queen dance. They drink the tea again. This sees Dani losing consciousness and somehow speaking Spanish. The dance sees Dani winning the part, and everyone applauds her and showers respect. At the same time, Christian is taken away and drugged as well with the same tea. He is asked to mate with a girl named Maja because he is astrologically perfect for her.

Under the drunken state, Christian agrees and meets a naked Maja in a room along with a number of naked women. He mates with her, and as she moans, so does the other woman with her. Dani observes this from a keyhole and breakdown, and far away has a panic attack. The community’s woman observes this and cries with her seeming like they can feel the pain. When Christian comes to his senses, he runs away naked and comes across the bodies of his friend. Until a member of the community catches him and puts powder in his eyes to knock him down.

The next day when they catch Christian, the community comes together to explain to Dani what Midsommar Festival is all about. Every 90 years, they are supposed to sacrifice nine people. The First four are to be outsiders. This came true with the sacrifice of Simon, Connie, Mark, and Josh. Four from the community, with two who volunteered and two who turned 72 years old. Last one May Queen decides of if its outsider or from the community. This festival is to keep the community clean.

Now, as Dani is Queen May, she needed to decide between Christain and a random stranger from the community. But looking at the way Chrisitan was as a boyfriend in the past, she takes his name for sacrifice. This leads to another weird ritual which sees the community inserting Christian’s body into a bear’s skin and putting it inside a temple. The one which they burn later. As the whole community mourns, so does Dani to close the film. The Midsommar ending explained the Pele’s excitement for Dani joining them. This may remind you of him mentioning his sister becoming the queen, and his parents burned to death. Furthermore, another thing to note is that this only happens every 90 years. This may mean that people do come every year to visit this place but are not killed like in the movie.

The Hunt Ending Explained: The Hunters Got Hunted

Why Did the Country Music Duo ‘Brooks’ and ‘Dunn’ Break Up? Revelations At the Reunion