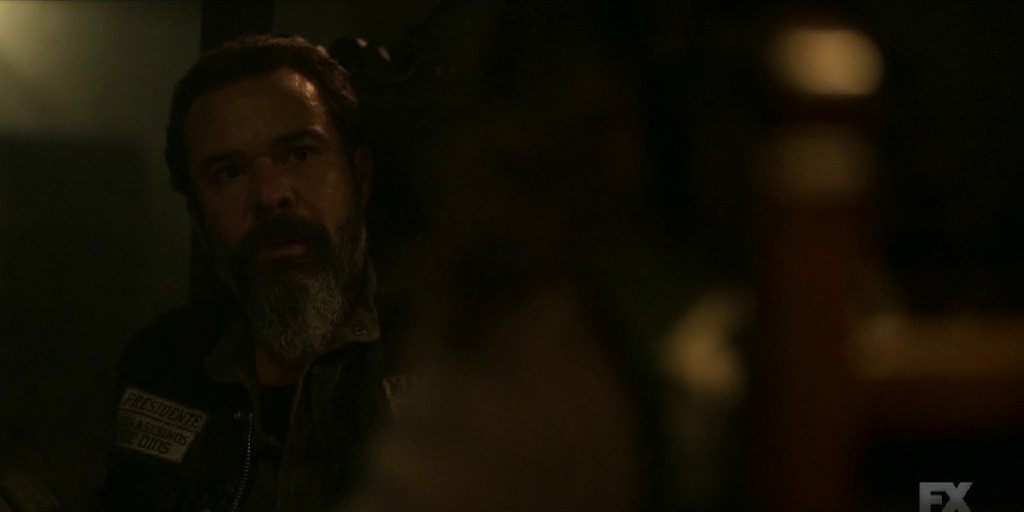 Mayans M.C. Season 3 recently aired the tenth episode. We almost thought the Mayan civil war finally came to a conclusion. The gang finished off Canche and celebrated the good times all together. But things didn’t stay well for long enough. EZ planned to leave the gang once and for all to settle far away with Gabby. But it seemed like Felipe managed to change her mind, which led her to leave all alone. Sederica Palomo’s assassination further led Miguel to leave the country as well. Now Emily was all alone again. Although EZ returned back to where he belongs. In the end, the other Mayans came to reclaim what is there’s as they don’t see eye to eye with some decisions of Bishop.

So coming to circle, the episode ended on a huge cliffhanger on how Bishop and his Santo Parde group would fight off this amount of Mayans. Plus, what it means for the other characters who were just beginning to find some life in a finale that could have been sweet. Anyway, here we are taking a look at everything happening in the tenth episode of Mayans M.C. Season 3. Also, if a Mayans Season 3 Episode 11 Happening or not. If not, should we expect the fourth season in turn?

Mayans M.C. has officially wrapped up the third season with the tenth episode. But they left the show on a cliffhanger and have already renewed it for the fourth season. So, even though Mayans M.C. Season 3 Episode 11 is not happening, we are getting a full-fledged new season soon, which might come around in 2022. Thus, continuing the story where it left off with the Mayans battling in a civil war.

FX President of Original Programming Nick Grad has praised the show for its run. Especially for the story that resonates with a wider audience leaving them wanting for more. The co-creator and executive producer of Mayans M.C. thanked the FX for allowing them to continue the story post Sons Of Anarchy. He also promised that the fourth season of Mayans M.C. might dive deep into characters and their truths, revealing further secrets and dangers that come around in this world.

The third season of Mayans MC built upon the civil war between the Mayans and new built-ups and falling relationships. It all began with the Stockton Crew taking a shot at EZ. Thus a path of revenge filled in, and there was a need for a sole king. The finale of Mayans M.C. began with blossomed relationships. EZ cuddling with Gabby after he promised her to leave the gang. Similarly, Angel is with Nails who is pregnant with his baby. Miguel facing the truth of Palomo’s assassination and Emily realizing Miguel drugged her. 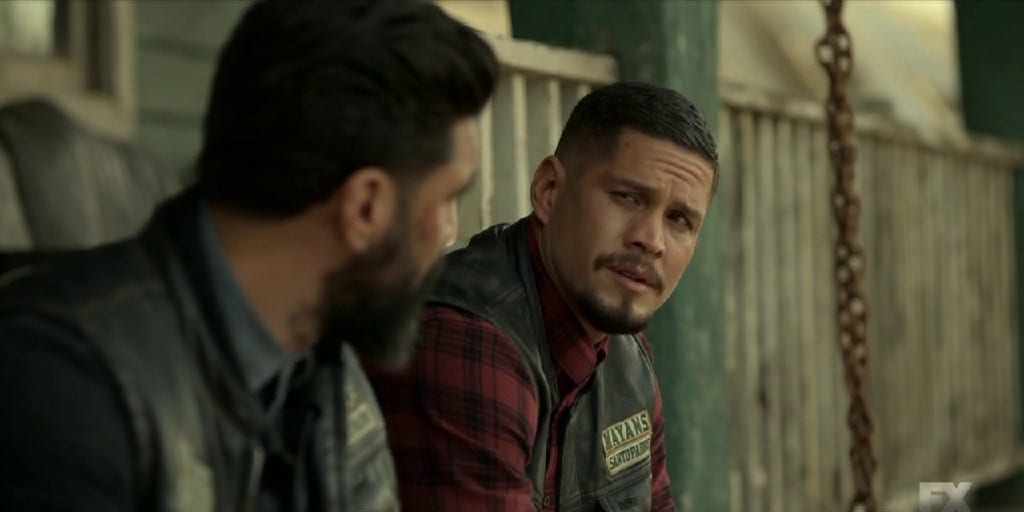 A Still From Mayans M.C. S03E10 Featuring EZ and Angel

Nestor on the other hand, approaches Marcus to recruit him in an attempt to kill EZ. As EZ, Gilly, and Angel wait near an auto shop for the Bishop’s orders, a woman arrives leaving a secretly planted bomb. Laura informs Taza of Palo’s arrival while Adelita confronts Anna for Potter’s location. At the auto-repair shop, Canche arrives but with his little kid making the situation difficult. Angel is hesitant to kill a kid, but EZ believes they cant wait and triggers the bomb once Canche sees them. The kid manages to survive as he was far away from the car, and the gang celebrates Canche’s death later.

EZ and Angel reconcile as EZ states he is leaving for a reason. Angel later reveals to Bishop and the gang about EZ’s exit. Leticia on the other hand, approaches Gilly to save his father Coco. Before EZ leaves, Emily comes to meet him and reconciles with him. She gives her the final kiss stating they missed the shot of being happy and hopes he grows old with Gabby. On the other hand, Gaby breaks the news to Felipe as well who manages to change her mind about moving with EZ. 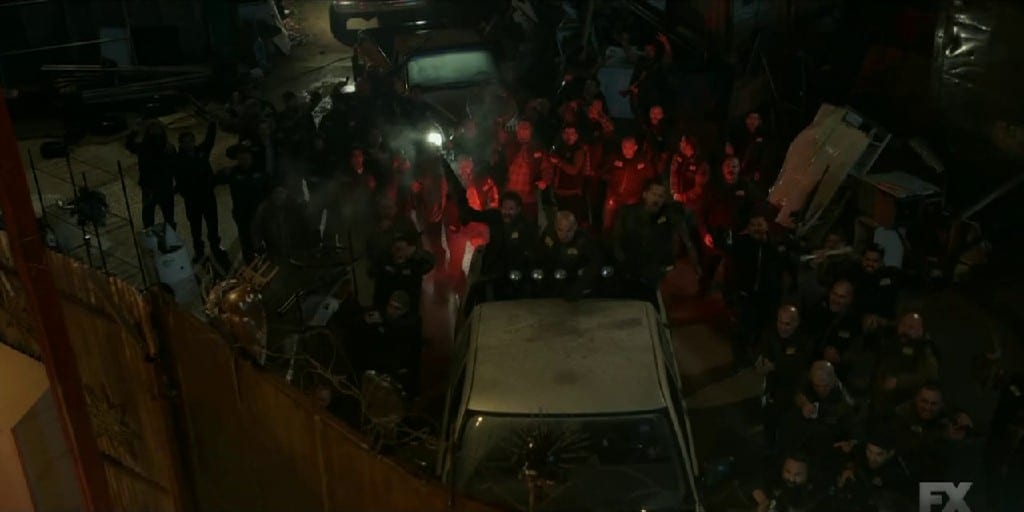 A Still From Mayans M.C. S03E10 Featuring The Mayans

During a meeting at the table, Diaz shoots down Ibarra. Potter informs Miguel about his arrest. As Miguel informs it, Emily, Nestor, and Marcus arrive at Felipe’s. Eventually, EZ arrives to realize Gaby left without him. Nestor and Marcus keep following EZ as he looks for Gaby. EZ reaches Gaby’s house to find a note for him.

Taza comes to Laura’s rescue only to realize Palo is waiting for him to kill him. But Laura takes the shot at Palo first. Adelita confronts Potter on the other side. Miguel has to leave the country when Emily decides not to go with him. Gilly rescues Coco as Hope decides to stay behind. Coco, in rage shoots Issac down and takes away Coco with him.  Taza comes to confess to Bishop while EZ returns. Just as Bishop is about to kill Taza, a huge group of Mayans comes along to attack Bishop and his gang.

All three seasons of Mayans M.C. are available to stream on Hulu. Check out the promo for the finale the third season below.

What To Expect From Mayans M.C. Season 4?

The third season of Mayans M.C. ended on quite a cliffhanger. Bishop and his gang are surrounded by the rival Mayans who don’t see eye to eye. We don’t even know if Bishopp killed Taza or not. So either Bishop talks them down or goes the all-out war. Some may survive and some may not. Furthermore, now Gaby is out of the picture, so EZ will be focusing solely on his Mayan family. The place where he belongs and would die for. Will he reconcile with now alone? Emily remains to be seen. 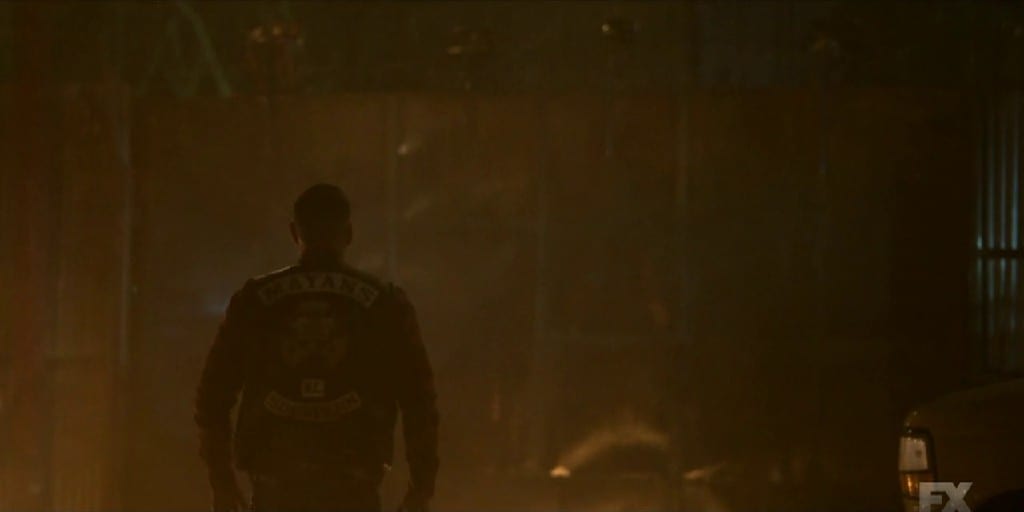 Apart from the above characters, Miguel is another one who we might miss out on for the fourth season. In the finale, when he was exposed, he decided to fly away from the country. So his return depends. Plus, as creator Elgin James mentioned, we are diving deep into the truths of the characters. So expect the exploration of Angel and Nails’ relationship as they are about to have a baby. Let’s hope for Coco to learn from his mistakes and live a better life with Leticia and Hope. For the Mayans as a family, let’s hope everything works out.