Marvel has never ceased to amaze the viewers with its unique and extraordinary ideas. Marvel Universe is very popular. And Marvel Superheroes are loved by the kids immensely. Actually, not only kids but also adults enjoy watching Marvel films and series equally. But Marvel has not stopped making movies and series only. Marvel recently launched a new Boardgame in collaboration with Funko. This is a collectible board game where players will have to collect different pieces. Each piece is one of their favorite Marvel characters. And to go along with this Board game, Marvel has also released a short animated series called Marvel Battleworld: Mystery of the Thano stones. This new series will show you a whole new side of your favorite superheroes.

The Marvel studios LLC is an American film and television studio. It is a subsidiary of Walt Disney Studios. Marvel created Marvel Studios in August 1996, which is part of Marvel Films. Marvel Studios is reputed for the creation of the Marvel Cinematic Universe films. These films are based on characters which are in Marvel Comics. Marvel Studios has released 23 films ever since 2008 within the Marvel Cinematic Universe. These also include some legendary films like Iron Man, Wanda vision, Spiderman Far From Home, Doctor Strange, Thor, Captain America, Wonder Woman, and many more. Recently they have also launched a television series in 2021. All of the Marvel films are connected to each other. The new Tv series that is been launched is also in continuation to the other movies.

On top of this, Marvel Studios also engages with the production of other Marvel-character film franchises. These also consist Spider-Man and Xman multi-film franchises. They have generated a revenue of over $1 billion only in the American Box Office.

Currently, Marvel Studios is also working on a short animated series that is airing on Disney plus Hotstar. And is also simultaneously handling the production of the TV series. The animated series on Hotstar was made to go along with the new board game that was launched. It was launched in collaboration with Funko.

Funko Inc. is an American company that manufactures licensed pop culture collectibles. To add to this, the company also produces licensed plush, action figures, and electronic items such as USB drives, lamps, and headphones. The company was founded by Mike and Claudia Becker in 1998. Originally Funko started as a small project to create various low-tech, nostalgia-themed toys. Its first launch was the bobblehead. It was a well-known restaurant advertising icon. Also known as the Big Boy Mascot. Thereafter the company has grown a lot. It recently collaborated with Marvel to make a collectible board game. 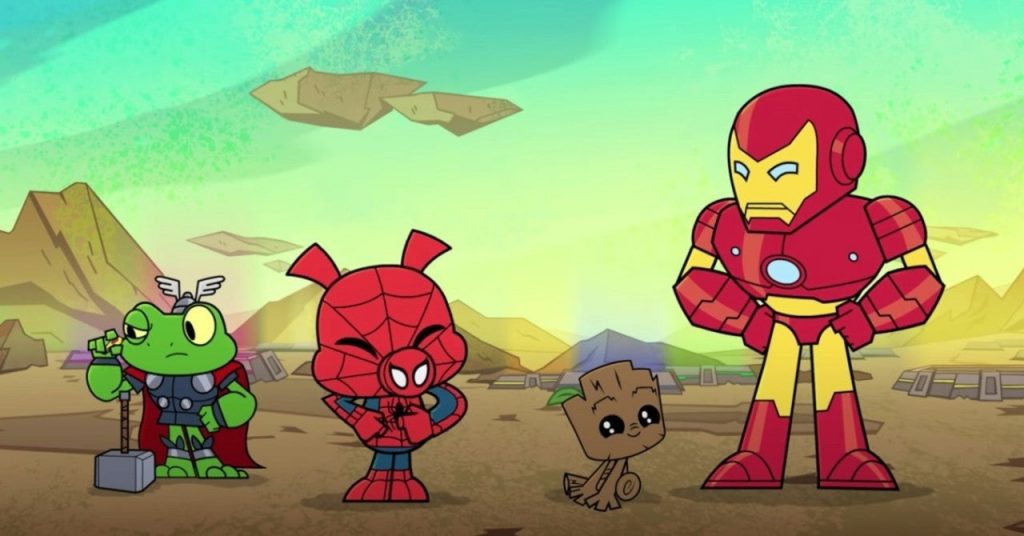 As mentioned before this animation series was released to go along with this Board game that Marvel has launched recently. It is the Marvel Battleworld: Mystery of the Thanostones. The animation series was first aired on the Marvel HQ YouTube channel. And later, it was aired on Hotstar as well. The animated series season 1 started in June 2020. It has only 6 episodes. The team of heroes includes Throg Iron man, Baby Groot, and Spider-Hog. In this, the might villain Thanos will try to come up with another devilish scheme against the earth. Iron man gets a whiff of his plan brewing and calls Captain Marvel for help.

But before she can do that, Iron man gets trapped in a stone and is taken to an alien planet. Then Captain Marvel follows a signal and reaches to save Iron man. She fights with Thanos and frees Iron Man. They are later joined by a very unusual team of heroes after they free themselves from the stones. This series is a perfect mix of comedy and action. Although it is short, It is appreciated by the viewers a lot. And with this super team, Fans have experienced loads of laughter as well as action. The Series also had the other major villains of MCU, like Corvus Glaive and Ultron. But there was an addition of some new villains that no one knows about.

The viewers are eagerly hoping for the arrival of a season 2. But as of now, there is no news related to this from the creators. I hope that they launch a season 2 for this amazingly hilarious series soon.

Read: Keeper of the Lost Cities: Everything We Know