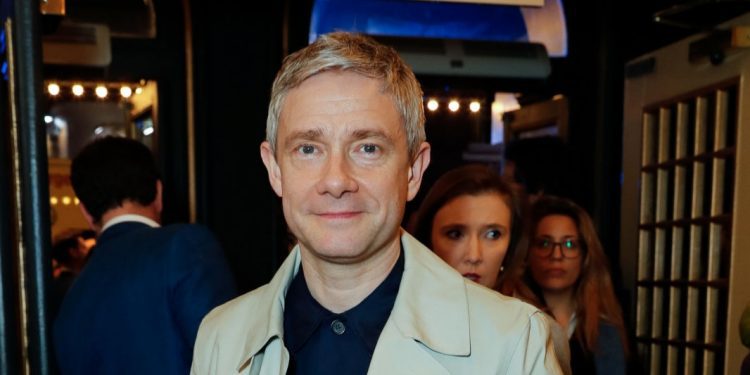 Martin Freeman is a well-known British actor. The 50-year-old actor’s new partner was recently seen with him. It hasn’t been long since he split from actress Amanda Abbington, his ex-girlfriend. This appears to be the first time the actor has decided to start over with a new relationship following their separation. The actor’s admirers are overjoyed for him. On Instagram, the celebrity also shared some of their lovely moments. Let’s have a look at this hot topic now that the actor has made his connection public. But, before we hunt for Martin Freeman’s girlfriend, let’s have a look at Martin Freeman in general. Martin Freeman was born in Aldershot, United Kingdom, on September 8, 1971, as Martin John Christopher Freeman.

Martin is best known for his roles as ‘Dr. Watson’ in the television series ‘Sherlock’ and ‘Bilbo Baggins’ in the film trilogy ‘The Hobbit.’ Martin found interest in theatre at the age of 15, but it wasn’t until he was 17 that he decided to follow acting as a profession. He went to a performing arts school and has since been in a number of television shows and movies. In 1998, Martin started working in the film industry. He went on to star in the British drama series ‘The Office,’ as well as the dark comedy and crime thriller ‘Fargo.’ Many of his films, including ‘Love Actually,’ ‘The Hitchhiker’s Guide to the Galaxy,’ ‘Nativity,’ and ‘The World’s End,’ have been box office hits, grossing millions of dollars. He has won numerous nominations and accolades over the course of his career, including the prestigious ‘Primetime Emmy Award’ in 2014.

Who Is Martin Freeman’s Girlfriend?

Martin Freeman is in a relationship with Rachel Mariam at the moment. Martin was previously married to fellow actor Amanda Abbington, his on-screen wife from Sherlock, for 16 years after meeting on the set of famous Men Only in 2000. The couple had two children together, a son named Joe and a daughter named Grace. However, they divorced in late 2016. The 50-year-old now has a new girlfriend, 29-year-old French actress Rachel Mariam, with reports that the couple would marry in the near future.

The duo was reportedly spending lockdown together at his North London house because they had a fondness for the same films. “It’s still early days, but they’re getting along pretty well,” they stated. Martin supports Mariam’s acting and writing career because they both enjoy the same films. Because of Covid, they’ve spent a lot of time together at his home in North London, but Rachel did not make it to meet some of his friends before the lockdown.” The duo has been seen together at events such as the Raindance Film Festival in October 2021, and Rachel frequently posts images of them on social media.

Who Is Rachael Mariam??

Rachel Mariam is a popular French actress and writer who was born on June 21, 1992, in Toulouse and now lives in London. She collaborated with Academy Award nominee Lenny Abrahamson on the BBC TV series ‘Normal People’ and with Aisling Bea on the TV series ‘This Way Up’ as an actor. As a screenwriter, her feature script ‘Juliet Is Fine,’ was selected for the 2020 Academy Nicholl Screenwriting Fellowship in the top 10% (out of around 8000 scripts).

Amanda Abbington was born in the United Kingdom. Miss Mardle in Mr. Selfridge and Mary Watson in the BBC rendition of Sherlock Holmes are two of Abbington’s most well-known roles. Amanda will be 48 years old in 2022. She was born on February 28, 1974. Abbington stands at a decent height of 5 feet 4 inches (1.63 meters).

Abbington’s hair is blonde, and her eyes are brown. Amanda grew up in Hertfordshire, England, after being born in London. Patsy Smith and John Smith are her parents. Her parents have only one child. As of 2021, Amanda’s net worth was predicted to be $1.2 million USD. This includes her property, funds, and earnings. Abbington’s acting career is her main source of income. She has amassed wealth from her multiple sources of income, yet she likes to live a humble lifestyle.