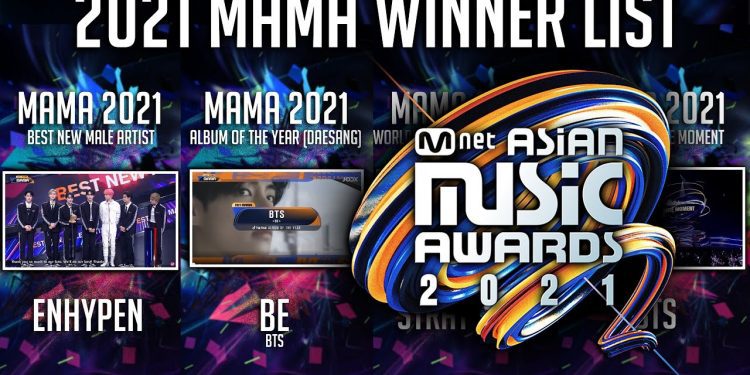 For all the due performances and to know who won at life with their music. The k-pop fans have been waiting for the MAMA!!! And after all the wait, the day of Mnet Asian Music Awards 2021 finally arrived. Blessing the fans with amazing performances from their favorite k-pop idols. And awarding the ones who make you go “deserved” when you listen to their music. Organized by CJ E&M, the award event was live-streamed all over the world for the fans to witness one of the best days in idols’ and fans’ lives. Here is a quick recap of what went down at the MAMA 2021 along with the list of well-deserved winners.

The event was hosted by “Nation’s Fairy” Lee Hyori as she became the first female artist to host the MAMA. After the break of THREE YEARS, ‘Wanna One’ got back together to perform their hits like ‘Energetic’ and ‘Happy’ on the stage. Along with a new song called ‘Beautiful Part 3’. After the performances by aespa, ATEEZ, Brave Girls, ENHYPEN, INI, ITZY, JO1, NCT 127, NCT DREAM, Stray Kids, and TXT. Along with a special performance by Ed Sheeran himself. Lee Hyori and the eighth crew of ‘Street Woman Fighter’ went on to put the end to the show with their power-packed intense performance.

Who Won The Awards?

After all the stage-breaking performances, it’s time for the final and the most important question; who won the awards?  While BTS took home all of the MAMA 2021’s Grand Prizes, other idols did get a chance to win the titles from the main awards. Here are all the winners of MAMA 2021!

At this point, it’s not even a shock to hear the name of BTS being announced at the award event, because the boys deserve all the praise so much. Winning all the awards from the Grand Prize category i.e. ‘Song of the Year’ (“Butter”), ‘Album of the Year'(“BE”), ‘Artist of the Year’. Along with becoming the ‘Worldwide Artists of The Year’, BTS went on to bag the awards for the ‘Best Male Group’, ‘Music Video’, ‘Male Dance Performers’, and ‘Tiktok Sinning Star’. They have bagged nine awards this year.

Also Read: Who Won A Daesgung At The 6th Edition Asia Artist Awards 2021?

The seven-member boy group presented by Hybe, ‘ENHYPEN’ went on to win the ‘Best New Male Artist’. The other nominees in the category were ‘DRIPPIN’, ‘EPEX’, ‘MIRAE’, and P1Harmony. While SM’s four-piece rookie group ‘aespa’ went on the win ‘Best New Female Aritst’ against Jo Yuri, Kwon Eunbi, LIGHTSUM, and STAYC. While Aespa thanked the fans and told them how they will work on themselves and get better. ENHYPEN revealed that they have an album coming up next year.

MAMA 2021 Winners of The Main Category

The Behind The Stage Team:

The Artists of Asia:

Also Read: The Game Awards 2021: Where to Watch, Timing and Everything to Know