The fans and the viewers are eagerly waiting to watch Magnum PI Season 4 Episode 7. The previous episode of the season gave the viewers a good amount of action and thrill that has got them excited for the next episode. This American series has been quite popular since it first came out on 24th September 2018. It has been gradually progressing with the storyline and has managed to keep the audience intrigued throughout the seasons. Furthermore, the character development has been pretty good that has kept the fans hooked.

The television series follows the genres of crime, drama, and action, which are all quite popular categories. This show combines those genres pretty well together and brings out a wholesome watching experience for the audience. It has received good enough ratings from the viewers, but the critics have had mixed thoughts about the show. This series is a reboot and has taken its inspiration from a popular series with a similar name that used to air from the years 1980-1988. It had a total of eight seasons and was a big hit at the time.

However, the latest iteration of the series is part of a bigger picture. It comes under the ‘Lencov-verse’ and is connected to other popular shows like “MacGyver” and “Hawaii Five-0”. Moreover, Peter M. Lenkov has developed all of these three shows, which is why they are considered under the ‘Lencov-verse’. Moving on, the star cast of Magnum PI includes Perdita Weeks, Jay Hernandez, Zachary Knighton, Amy Hill, Tim Kang, Stephen Hill, and more. The ongoing season has got the viewers excited about every episode. Therefore, they are now looking forward to the release of Magnum PI Season 4 Episode 7. But first, let us take a recap of the previous episode. 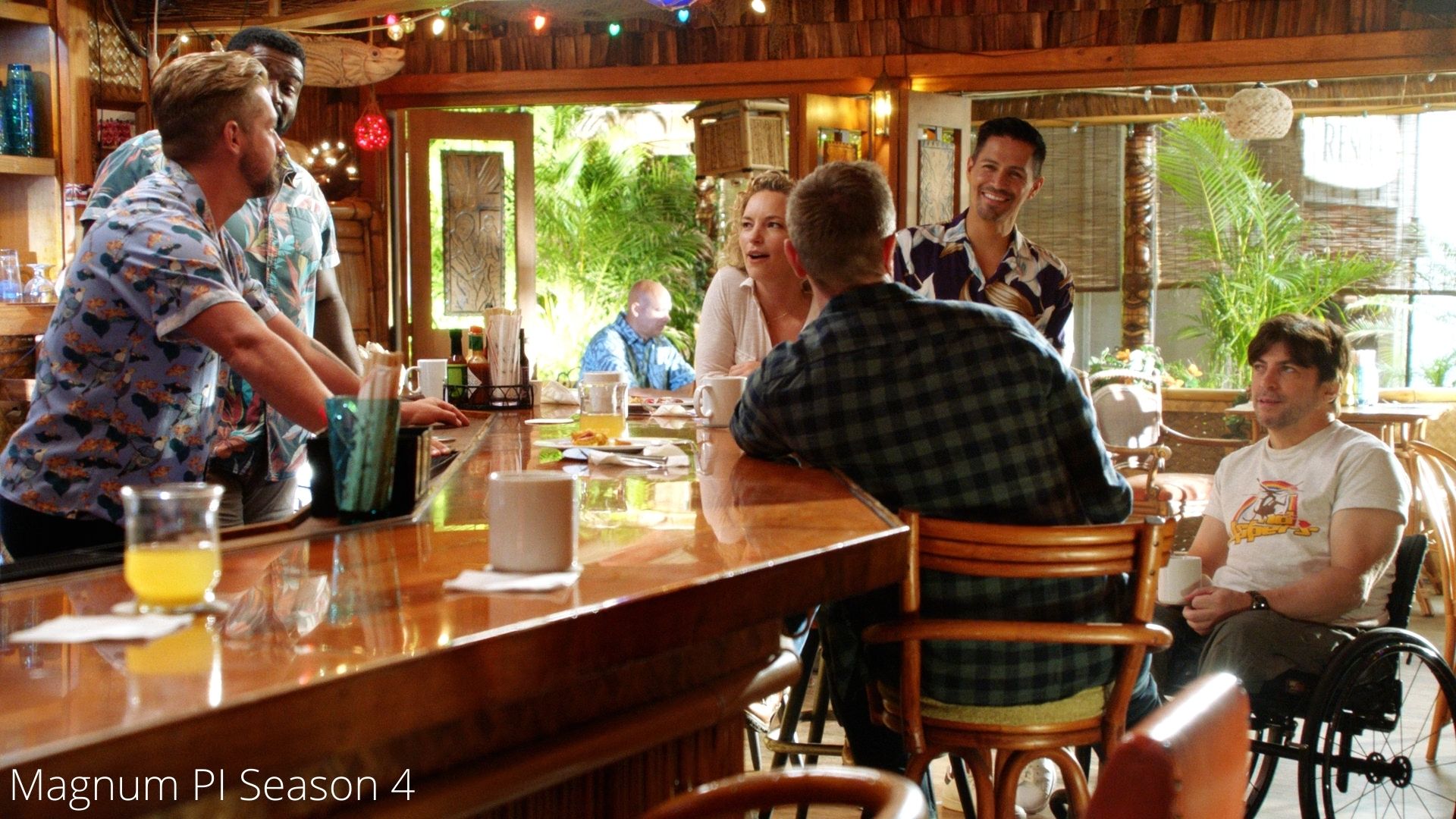 Episode 6 of Magnum PI Season 4 came out on 12th November 2021. Furthermore, the episode was titled “Devil On The Doorstep”. The episode began with Thomas, Juliet, Shammy, TC, and Rick hearing stories from Robert about Rick and Robert’s childhood mischiefs. However, Thomas and Juliet got a visit from Robin’s friend Mr. Leota who is a reporter. He wanted the help of Thomas and the HPD to look out for one of his sources. She was a woman who was about to give him some information about a man named Nathan Stallard.

On the other hand, Juliet gets a call from one of her MI6 colleagues named Eve. She asks Juliet to meet a man named Barlowe and retrieve a drive from him that has confidential information. The next thing we see is Juliet meets Barlowe, but he discovers that the deal has been compromised. So they fight, and he starts running to escape but gets hit by a truck and dies. Juliet gets away from there but decides to recover the drive from Barlowe’s body at the Morgue. On the other hand, Thomas gets ahead with the investigation and talks to the woman who was about to meet Leota but didn’t show up.

He gets some more intel about Stallard, and with the help of Detective Gordon and Leota, he discovers that Stallard has been running an illegal child adoption by trafficking newborn babies. They all go after Stellard at a hospital where he is about to get one more newborn baby from a poor mother. However, Thomas catches Stallard, and HPD arrests him. On the other hand, Juliet retrieves the drive from the morgue and hands it to Eve. But she learns that some old MI6 agents are selling secret information, and she has to help MI6 take them down. In the end, we see Rick learn from an FBI agent that his friend Robert has murdered someone in Chicago.

Magnum PI Season 4 Episode 7: When Will It Release & Airing Time

The previous episode gave the fans another shocking revelation and had got them excited for the next episode. “Magnum PI Season 4 Episode 7 will release on 19th November 2021 at 9 pm ET on CBS.” Furthermore, the episode will be titled “A New Lease On Death”. The upcoming episode will get interesting as Rick has learned about Robert’s truth. He will have to cooperate in the investigation with the FBI agent. On the other hand, Thomas Magnum will try to investigate in his own way. So stay tuned for another exciting episode arriving this Friday.

The crime-action drama tv show is once again keeping the audience hooked with the ongoing season. That is why the viewers are searching about where to watch Magnum PI Season 4? The answer to that question is quite simple as usual. “Magnum PI Season 4 airs every Friday on the CBS television network at 9 pm ET.” In addition to that, the show is also available to stream on Paramount+. Other than that, the viewers can find the show on Amazon Prime Video and Youtube TV as well. So, if you haven’t watched the show yet, don’t wait anymore and go start watching it.

Also Read: Who Does MacGyver End Up With In The Final Season?

Who is Nicholas Latifi Girlfriend? What do we know about the Canadian-Italian Racing Driver? Starting with his brief introduction, Nicholas...

One Piece Episode 999: Release Date, Preview & Where To Watch

Jacob Elordi & Kaia Gerbe: The Relationship is Over