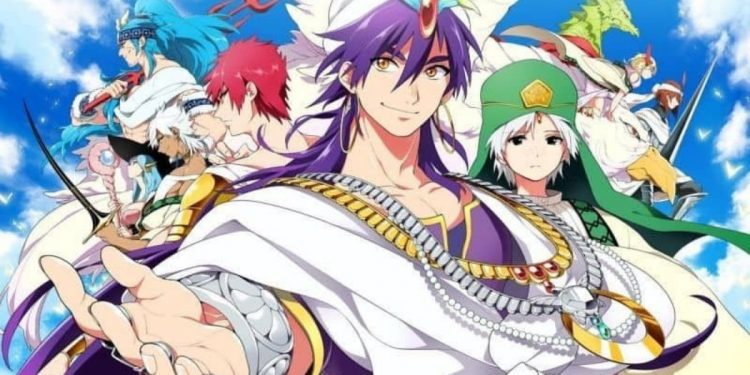 Is there going to be a Season 2 of Magi: Adventure of Sinbad

Arabian nights have been a great influence from our very childhood as they helped us to take our imagination to an extreme level. After fairy tales, it was the one that made us travel around the fictional world without even stepping out of our comfort zones. Indeed, they were something really good even now we will enjoy reading them, However, as the time changed to a more advanced one, those stories are coming forward with twists yet maintaining the originality of the old times. If you still adore those 1001 Arabian Nights stories, then this is for you, the anime series Magi: Adventure of Sinbad will surely make you feel nostalgic.

The anime series Magi: Adventure of Sinbad is the one that has been highly inspired by the series 1001 Arabian Nights. Even though there is a great difference between the plot of the series and the original stories, there is a lot that we can relate to them. The name in the title “Sinbad” is the character you will come across in the story Sinbad, the sailor. A fictional mariner and a great hero of a Middle Eastern origin. The original Sinbad starts hailing his ship from Baghdad during the early Abbasid Caliphate. However, the anime series centers on a character who is somewhat different from the original one, to know how to stick till the very end.

About Magi: Adventure of Sinbad

Starting from the series introduction, Magi: Adventure of Sinbad, also known as Magi Shindobaddo no Boken, is a Japanese manga series written by Shinobu Ohtaka and illustrated by Yoshifumi Ohtera. The manga series was published by Shogakukan and appeared in Weekly Shonen Sunday. It dropped out its very first chapter on 128th May 2013, and on 25th April 2018, it concluded with 19 tankobon volumes. An anime adaption of the series was produced by Lay-duce Studio that dropped on 16th May 2014 and concluded with 5 episodes in total. Each episode has a run time of 24-28minutes, this was considered as an original anime of the manga until a full-length series was released.

On 23rd April 2016, another anime adaption of the series was released, which was produced by the same studio, Lay-duce. It was directed by Yoshikazu Miyao, also known for directing the film Inazuma Eleven Go: Kyukyoku no Kizuna Gurifon. The team of producers includes Junya Okamoto, Shunsuke Saito, Toshihiro Maeda, Noritomo Yoreuchi. The script for the anime series was written by the duo of writers Taku Kishimoto and the manga writer Shinobu Ohtaka. Originally it was released on JNN – a Japanese local network – and was licensed by Netflix to stream it all over the world. The anime series concluded with a total of 13 episodes, and fans are demanding a season 2.

Unlike Sinbad, the Sailor of Arabian Nights, the plot of Magi: Adventures of Sinbad goes around the origin of Sinbad. He later established the kingdom of Sindria and became its ruler. As the series progresses, you will get to witness Sinbad’s father’s death, and later, his mother dies when Sinbad was a teenager. He lost his father in the war against Reim Empire and then spent his youth days helping the local villagers and treating his ill mother. Later, when his mother dies due to the chronic illness, Yunan, at the request of Sinbad’s mother, guided him to take steps towards changing the world. Yunan then instructed Sinbad to challenge the Dungeon called Baal and claim the treasurer after defeating it.

There is a rumor about Baal that numerous soldiers and warriors challenged but were never able to defeat and didn’t even survive. But Sinbad became the exception, and along with a Parthevian named Drakon, he defeated the dungeon and conquered Baal. Hence, gained all its treasure and allegiance of the Djinn, thus becoming the first person to ever capture a Dungeon. This is how he took his next step towards changing the world.

So, as for season 2, there aren’t any announcements related to it, and no studio related to its production has announced its comeback. Neither the official website nor the official Twitter handle has anything disclosed regarding this, but we are going to speculate whether we can have a Season 2 or not.

The anime series Magi ended on 2nd July 2016 at volume 7, Chapter 55 of the manga. However, there are a total of 19 volumes in the manga, and still, we are left to witness what happens in the remaining twelve volumes. If we get a Season 2, it is more likely to continue with chapter 56 of manga since there are six more dungeons left to capture. The most important scene, the death of his mother, is also left to cover. So, this clearly indicates that there are a lot of things to cover, and the production company can produce a considerable length of Season 2. It is speculated that the Season 2 of Magi can have 12 to 24 episodes depending on the things that are yet to get covered.

However, we can even ignore the fact that it has been around 5 years since the series has been concluded, and there are no whereabouts of a renewed season. Nor the production team have participated actively in any of the fest and anime conventions. This also shows that it is likely that we might not get a renewed season of the series. However, we can leave hope since, in the year 2022, many most awaited series is going to release. Stay tuned with us to get updates on this matter.