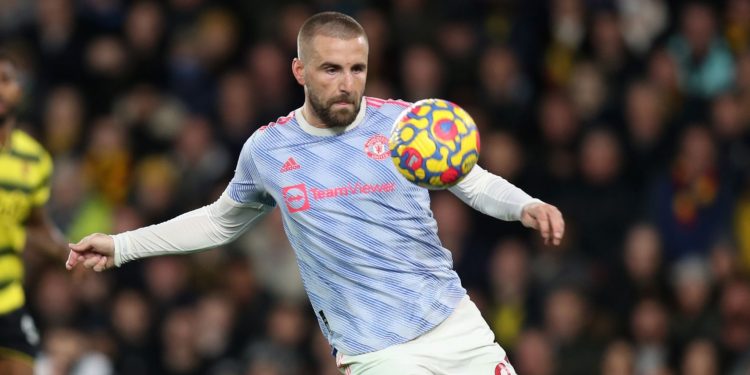 Lately, the popularity of Luke Shaw has been rising all over the internet, resulting in fans being eager to know about Luke Shaw’s Girlfriend. Shaw is a famous left-back for Manchester United and England and wears a T-shirt with the number 23. Luke has been doing this since he was 15. Luke Shaw is 26 years old and born on July 12, 1995. He is from the London area of Kingston upon Thames and attended Rydens Enterprise School in Hersham, Surrey, for his education. Joanna and Paul Shaw are his parents. He also has two younger brothers, Ben and Nicole Shaw. Luke Paul Hoare Shaw is his full name.

Luke grew up as a Chelsea fan and said he wanted to play for the London club first. Luke Shaw attended the Chelsea Development Center in Guilford at the age of eight but was denied a place at the academy. Shaw joined Southampton Academy at the same age and became a regular in the U18 team at the age of 15. Shaw is 1.85 meters tall and weighs 75 kilograms. Luke also has blonde hair and green eyes.

United defender Luke Shaw has a long-standing relationship with Anouska Santos. Their relationship started last year in 2017. Anouska is four years older than Luke and was born in London. The couple also attended the wedding of Shaw teammate Phil Jones, who married Kaya Hall in 2017, showing some that the lovebirds have been official for some time. Since then, Santos has attended many United events with his footballer boyfriend, including awards shows and charity dinners, to support his sporting partner throughout his career.

The couple made it official in 2017 when they were filmed together at the Wireless Music Festival. She regularly posts pictures of herself and Luke, which shows that she is very supportive of her boyfriend as she is often seen in the stands at United games. Also, the couple is really a very happy couple, and at this point, they have one child. Anouska gave birth to the couple’s first child, a boy, in November 2019. They called him Reign London.

Also Read: Nick Helm Partner: Who Is The Comedian Dating In 2021?

Anouska Santos was welcomed to the beautiful world on May 16, 1992, in London, England. She got most of her popularity after she started dating the Manchester United star, Luke Shaw. Anouska is now a true Instagram star. According to her date of birth, Anouska Santos’ zodiac sign is Taurus, which means that she is a very kind and reliable person.

The Instagram star was born in London, which means her nationality is English. When we dug into her social media accounts, we found that she loves to travel and has visited almost every imaginable city. Anouska always shares her journey with his 44,000 followers on her Instagram page. Anouska’s background cannot be determined, but because she is a huge social media user with a large number of followers, she became a social media influencer out of self-esteem. You can follow Anouska on her Instagram, @anouskasantos. Anouska’s net worth is estimated to be around $500,000, and her boyfriend’s net worth is approximately $44.5 million.

In 2011, Luke Shaw made his international debut. He made six appearances for England Under-16s before making his debut against Slovenia in February. Luke Shaw was selected for the England U21 national team for the first time in January 2013 for next month’s friendly against Sweden. However, Luke had to retire from the match due to an injury during training.

On February 27, 2014, he was appointed to the English Premier League for the first time. It was a friendly match against Denmark. Luke made his game debut, replacing Ashley Cole at halftime. On May 12, 2014, Roy Hodgson included Luke Shaw in his 23-man squad for the 2014 FIFA World Cup. After Leighton Baines, Luke is England’s second left-back. Luke made his tournament debut in the final group game against Costa Rica in Belo Horizonte. Luke is also the youngest participant in the tournament.

Also Read: Chris Tarrant’s Affair: The Facts That Might Shock You!