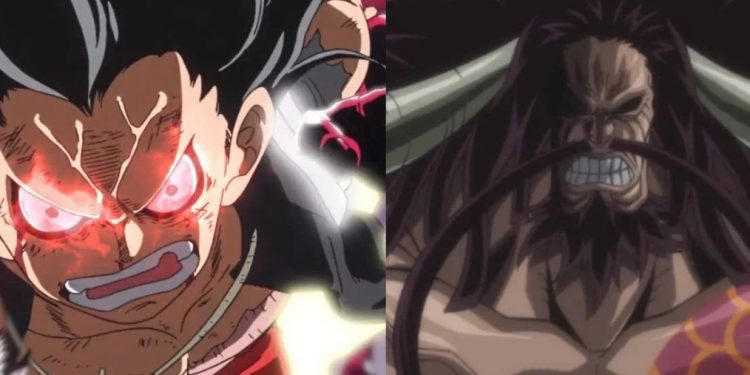 One Piece Chapter 1038 reveals Kaidou’s dranken technique after taking alcohol and drinking it. The manga delayed the previous chapter, but the raw and scans were released, but the manga will take another weekly break. One Piece 1038 spoilers will release this coming week, even though the manga will take a weekly break. Chapter 1037 spoilers were delayed, but they have recently been released, and we will be looking at the updates of Luffy vs. Kaido and other mysteries in Onigashima. Luffy and Kaidou are yet to settle their scores since they are all determined to become the Pirate King.

Kaidou believes that a brat like Luffy will never become the Pirate King. This has become interesting since another battle has been settled, and the Straw Hats has brought down two of Kaidou’s important subordinates. Queen’s loss has been announced at the hall, and Kaidou’s underlings were surprised since they never expected that one of the Lead Performers would be defeated by Sanji. They were confident that Queen would get the job done. But he failed them since Sanji was surpassed his limits and sent Queen away from Onigashima’s castle.

In the previous update of the manga, Queen was seen brutalized in a manner that he won’t recover and has no match against Sanji. Kaidou has not received the news that Queen is defeated, and the other allies are yet to know about Zoro vs. King. It was also shocking to see Zoro dominating King on Zoro’s part. Kaidou would never believe that the Straw Hats and the Samurai would defeat his potent man, but the tides have changed, leading the CP0s and the Numbers to interfere. The new version of the Numbers has also joined the battle believing that they can defeat the enemies.

Previously on One Piece Chapter 1037

The chapter is title is “Shuron Hakke” in English, “Eight Trigrams Dragon Sake.” Shuron Hakke is revealed to be one of Kaidou’s Raimei Hakke: Eight Trigrams Thunder. We see part of the Flower Capital where the festival is about to end. But they are unaware of the war at the Onigashima castle; meanwhile, Kaidou vs. Luffy in part two, where Kaidou and Luffy exchange massive barrages. Zoro has also smashed King, and it is up to Luffy to bring Kaidou down. Kaidou looks at his waist, withdraws his booze, and drinks it while fighting with Luffy.

Shuron Hakke is Kaidou’s drunken technique, and he uses that to fight while drinking. The booze makes Kaidou transforms into a different phase when he fights with Luffy. Luffy is sad; she tears and gets furious since he knows he must smash Kaidou. Kaidou unleashes Gundari: Ryuseigun and uses the technique against Luffy. But Luffy uses Gomu Gomu no Rocket Gatling against Kaidou, who realizes it was painful. Meanwhile, at the Castle of Pangea in Mary Geoise, we saw the Gorousei gathering and discussing catching Nico Robin.​

They know that Nico Robin is the pillar of the Straw Hats Pirates. On the other side, we see the Government warships nearing Wanokuni.​ But the Gorousei receive a report from a strange person in the fleet. The strange person told them about a gigantic mysterious “Shadow.” The Gorousei was shocked and realized that it had never happened in the past. They know that it is a legend, and it has never been awakened for the last hundred years. The Gorousei reveals about the Devil Fruit; they know that changing the name of the Devil Fruit will make it safe and secret. The gigantic mysterious Shadow begins to reveal its true identity.