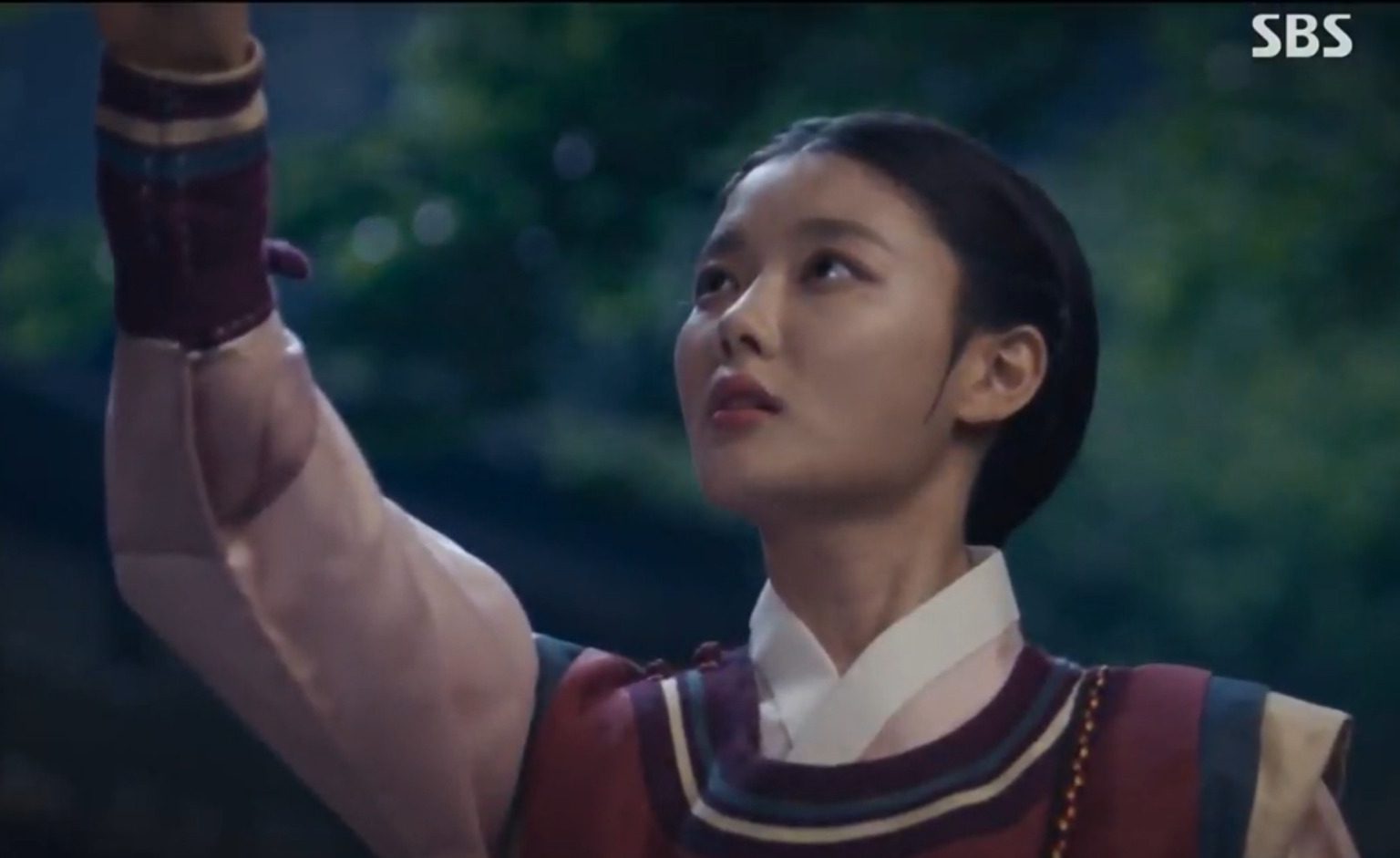 Lovers of The Red Sky Episode 11

With “The Lovers of The Red Sky” moving forward to its episode 11, the story is getting darker each day. And the truth is beginning to come out. More than half the episodes from the story are out now. And we have seen the characters going through so much development. Fans have been loving the show, as the ratings are just increasing day by day. As of now, the truth about the portrait of the late King Young Jong is out in front of Chung Gi and the grand prince, Yeong Myung. And Prince Joo Hyang is making schemes to fulfill his dream of the king’s throne. The fans are absolutely into the story and are waiting for more updates.

Once the “Ma Wang” who was only heard in the night stories or was considered just a rumor. It is now out in the open, and the divine painter herself experienced the demon. As we saw Chung Gi and Ha Ram running out of the pavilion, Ha Ram felt suffocated. It took a few minutes for Mi So’s spell to work for the “Ma Wang” that was hidden inside Ha Ram to come out. As the evil spirit comes out, it takes control over him. 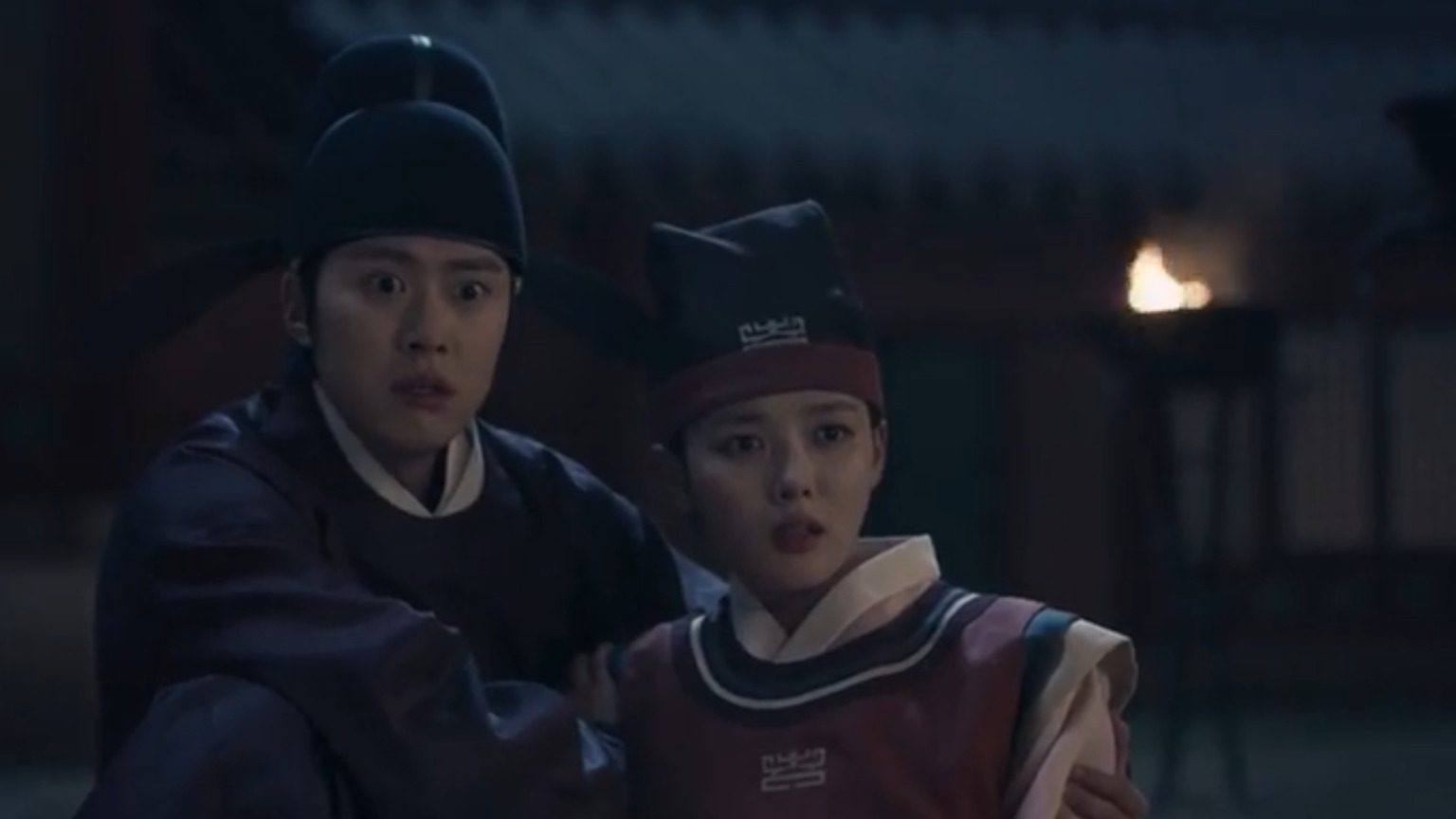 A still from Lovers of The Red Sky: Prince Yang Myung and Chun Gi

Also Read: Where is ‘One Summer’ Filmed? Everything About The Filming Locations

Looking at him, she understands it is not Ha Ram himself, but someone else, and cries out his name and help. As soon as her tear hits his hand and he hears his name through her mouth, he starts questioning himself. And as his guard fell down, the spirit tiger came out to save Chun Gi. The tiger that resides in the painting throughout the tiger paintings in the palace. Freezing the timeline, she orders Ma Wang to leave immediately. Leaving Ha Ram unconscious on the ground and not remembering a thing in the morning. 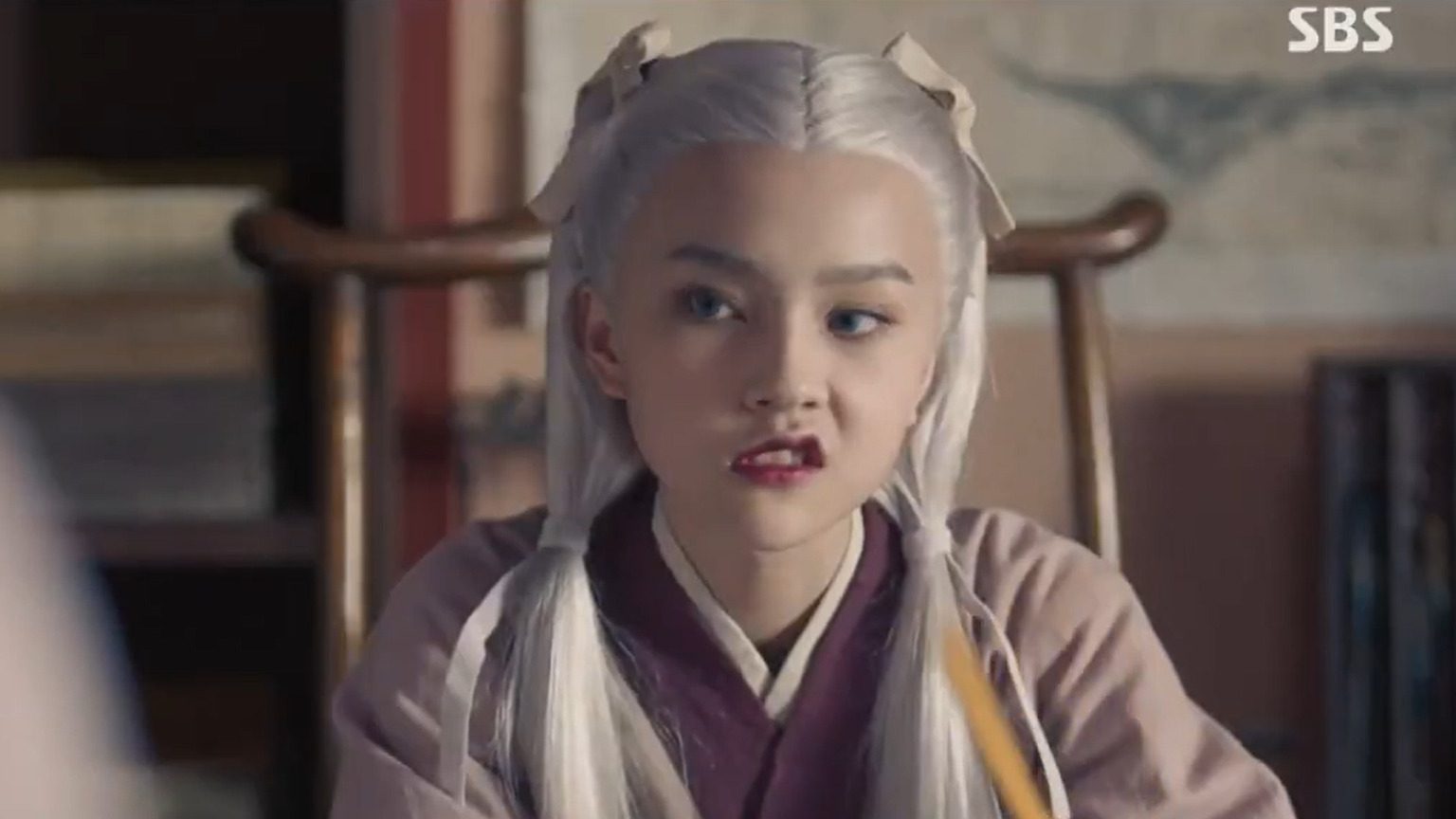 A still from Lovers of The Red Sky: The Spirit Tiger

A Visit From The Goddess of Life To The Vial

As Prince Yang Myung and Hing Chun Gi get back to their senses over what had happened. The prince has no idea what just went down. On the other side, Chun Gi almost died. As they both take Ha Ram to his room, Yang Myung asks if this happens regularly, linking one of the old events from the mountains to the one now. When he begins to leave, Chun Gi says that she will stay the night with Ha Ram, taking care of him. As she falls asleep, the goddess of life herself appears, helping in the early healing of Ha Ram. With her magic, she heals the cut Ha Ram had and the hand marks on Chun Gi’s neck.

Also Read: The Vampire Dies in No Time Episode 2: Release Date, Recap & Where To Watch

She is joined by the spirit tiger, who saved Chun Gi earlier. As she asked the goddess of life about the demon appearing again. She tells her that the demon can’t be finished at once. And that Chun Gi and her eyes are the vial that will help them contain the demon spirit. When Chun Gi wakes up in the morning, she finds herself in a proper bed. As she sees Ha Ram approaching her, she backs out for a second. But when asked what happened the night before, she tells him everything that took place the last night.

A still from Lovers of The Red Sky Episode: The morning after Ha Ram got possessed by Ma Wang

The Story Behind The Late King’s Destroyed Portrait

Since the grand king is trying to hurry up the restoration of the portrait of the late king. The mystery about how the portrait was burned in the first place was finally revealed in episode 9 of The Lovers of The Red Sky. A curious and worried Prince Yang Myung asks Han Geon, who is the master of landscape painting at the bureau. Han Geon finally reveals the reason that the portrait holds “Ma Wang” inside it. Ma Wang is the evil spirit that helped the late King Young Jong conquer all his wars and take over royalty.

But with time passing, the greed of the spirit just increased, and it slowly took over the late king’s soul. When the king died, his own soul, now mixed with Ma Wang’s evil one, was out to take over the world. But the divine painter, Hong Eun Ho, was hired to make the portrait. And the spirit was captured inside the painting. But soon after completing the portrait, Eun Ho’s health started detroiting, and soon he lost making sense. People started calling him crazy because of the things he would see and act like. Just like he shouted that Ma Wang was here when he saw Prince Joo Yang at the painting contest and attacked him with the brush. The portrait was caught in a fire by itself, and the evil spirit got out. 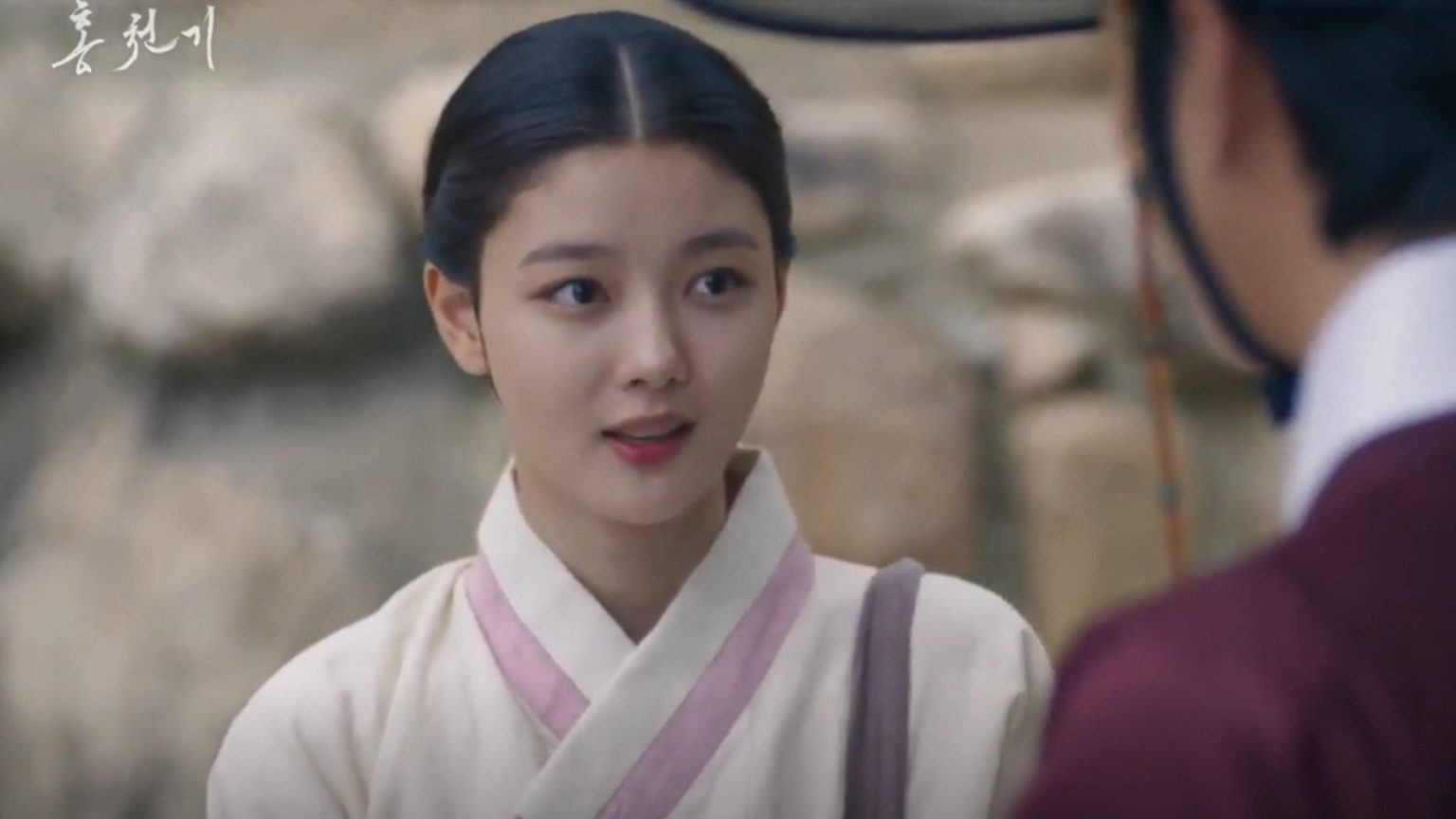 A still from Lovers of The Red Sky: Chun Gi is getting ready to make the late King Young Jong’s portrait by all means.

Lovers of The Red Sky Episode 11 Release Date and Where To Watch?

Lovers of The Red Sky Episode 11 will release on October 12, 2021. The upcoming episode will be available to watch on SBS and Rakuten Viki’s streaming website and app. With everything that has happened till now has lead almost everyone into trouble. At the time, Ha Ram was under the influence of the spell and was possessed by the demon spirit. Prince Yang Myung witnessed him as being a danger to people around him, especially Hong Chun Gi. Thinking of it as the way to take him away from Chun Gi, he had sent him for the investigation. To check if there was something wrong with Scholar Ha. And it turns out that Ma Wang’s spirit resides in him. So Ha Ram is currently in a lock-up while the people in the royal palace figure out a way to take the spirit out.

A still from Lovers of The Red Sky: The goddess of life visiting Chun Gi and Ha Ram the night he was possessed.

What To Expect From The Lovers of The Red Sky Episode 11?

As the king’s health is getting worse day by day, he wants the restoration process of the painting to be done as soon as possible. So he can capture the spirit again and lock it inside for good. And leave the throne to the crowned prince without the problems they can’t take care of. As Prince Yang, Myung has already told Chun Gi about the demon. She is also determined to master the art of portraiture and face drawings. So she can help take Ma Wang out of Ha Ram’s body and free him from the curse. Even though everybody, from her father and the headmaster to her friends, everybody is telling her not to draw the portrait.

Meeting him in a prison cell when he hasn’t done anything wrong. His condition broke her heart. With Ha Ram’s family ring on Chun Gi’s finger, she practices drawing the face shapes every night. With the prince watching and helping her out. But as soon as he sees the ring in her hand, he tells her to forget about Ha Ram. We see her finally finishing the late king’s portrait. But as soon as she returns home, she loses consciousness. Getting cursed just like her father.