After finding out about his biological father, Ha Ru decides to stay away from So Ri. The only place he could hide at is Yoon-ah's and there they have a deep conversation about her pregnancy. 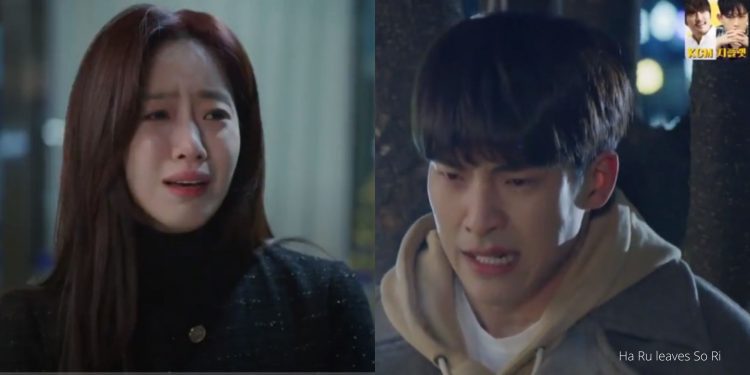 After finding out that So Ri is his sister, Ha Ru starts to maintain distance from her. Even when she runs away from home for him, he does not meet her. Later, Yoon-ah finds him in the hospital as he meets with an accident. In ‘Love Twist’ episode 26, Ok Hee talks to Gwang Nam about her share of property after the divorce. This makes it hard for him as both Ok Hee and Hee Ok want the same building.

Also, we find out that after the one-night stand, Yoon-ah gets pregnant. Ha Ru is hiding at her place, and this gives them time to have a conversation about this. He suggests she should not have a baby if she does not want to. As he is the only one who knows about the pregnancy, he goes to the doctor’s appointment with her

Till now, we have seen that Ok Hee tells Ha Ru that Gwang Nam is his father. Later, when he tries to confront Hee Ok about his biological father, she lies to him. This creates a problem for everyone as Ok Hee now thinks that Ha Ru and So Ri are siblings. When she finds out that Ha Ru and So Ri is going to register their marriage, she drags So Ri back home. Because of this So Ri’s grandparents ask Ok Hee to explain her actions. She reveals that Gwang Nam is having an affair with Hee Ok.

Late at night, So Ri escapes her house with the help of Do-Hee. She goes to meet Ha Ru, but he never shows up. So Ri has no idea that he is looking at her from afar. No matter how much he wants to be with her but the revelation that they are siblings is stopping him. The next day, So Ri goes to Ha Ru’s house, but he is not there. When Yoon-ah arrives at the house, she tells her that Ha Ru left for the U.S.

So Ri asks her mother if she has said anything to Ha Ru. Ok Hee confesses that she asked him to leave So Ri alone. After hearing this, So Ri is devastated and vows never to forgive Ok Hee and leaves home again. So Ri’s grandfather is furious with Gwang Nam and beats him for having an affair. He calls him despicable and warns him that he cannot get a divorce. On the other hand, So Ri’s grandmother tells Ok Hee that she cannot have a divorce. She suggests her to stay with Gwang Nam and forgive him later if she ever wants to.

After having a massive argument at home, Gwang Nam goes to Hee Ok. While they are having dinner, she tells him that the building will undergo reconstruction very soon. As she has nowhere else to stay, she asks Gwang Nam for the sea-facing building that he owns. However, Ok Hee also wants it as her share after divorce. This creates a problem for Gwang Nam as he will have to choose between Hee Ok and Ok Hee. Also, Kyung Joon takes back his parents’ wedding rings back from Do-Hee after their breakup.

The ‘Love Twist’ episode 26 will be released on 17th January 2022. So Ri thinks that Ha Ru has left for the U.S, but the truth is that he is hiding at Yoon-ah’s place. Also, Yoon-ah is pregnant with Gangnam Chun’s baby. She does not have his number or address. Yoon-ah makes an appointment for an abortion, and Ha Ru agrees to go with her. Later, So Ri comes unannounced at Yoon-ah’s place, and Yoon-ah tries to hide Ha Ru from her. On her way, So Ri meets Gangnam Chun, and he tells her that Yoon-ah is avoiding him.

Where To Watch ‘Love Twist’ Episode 26?