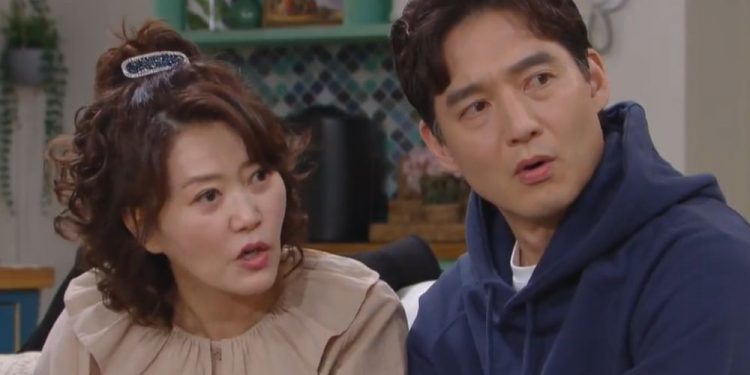 Park Ki Tae approaches Ha Ru again and tries to figure out if he knows who his real father is? As Ha Ru has no idea who this man is or what is his history with his mother, he kicks him out. Also, he tells him never to visit him again. In ‘Love Twist’ episode 23, Hee Ok uses fake proof to make Park Ki Tae believe that Gwang Nam is Ha Ru’s son. On the other hand, Kyung Joon gets the motivation to propose to Doo Hee as he does not want to be a loser who proposes after a long time.

As Ok Hee also knows about Hee Ok’s lie she is not able to rest in peace. She asks Gwang Nam the truth and he replies that he is not Ha Ru’s father. He loves Hee Ok but is not ready to leave Ok Hee either. This puts a lot of strain on his relationship with Hee Ok. The next day, as Ok Hee is not able to stop thinking about what Park Ki Tae said she visits Ok Hee’s place. There she finds DNA test results outside her house.

After finding out about their parents’ affair So Ri and Ha Ru decide to stop talking to them. Their relationship is the reason Gwang Nam doesn’t want his daughter to marry Ha Ru. Later, he finds out that Park Ki Tae is Ha Ru’s real father. This becomes a big problem as he is a criminal who used to be in love with Ok Hee. When Ok Hee meets Ki Tae after a long time she is very uncomfortable. Still, he does not leave before telling her that Hee Ok claims that Ha Ru is Gwang Nam’s son. Other than this Ok Hee is very hurt about her daughter leaving the country because of her family.

So Ri’s grandparents did not know the real reason behind Gwang Nam’s disapproval. When they witness the change in Ok Hee’s behavior they become suspicious and think there might be another reason. Ok Hee fights with Gwang Nam and asks him the truth. He assures her that Ha Ru is not his son. Not knowing this fact, So Ri’s grandfather talks to Ha Ru and gives him permission for the marriage. After Ha Ru, he has a conversation with Kyung Joon and tells him to be with Doo Hee as she is a great girl.

At home, Kyung Joon searches for his parents’ wedding rings and plans to propose to Doo Hee with them. However, Mi Ja catches him stealing in his own house and gives him a mouthful. Later, he confesses that he invested his money in cryptocurrency and has made a fortune. Hearing this makes his parents agree to give him the wedding bands. They keep discussing that Kyung Jung has found a rich girl to marry and this might be the beginning of a new chapter for them.

Dong Man meets Kwang Nam and confesses his mistake of telling everything to Park Ki Tae. This makes Gwang Nam furious and he breaks his friendship with him. The next day, Park Ki Tae visits Ha Ru at his home and behaves very informally. Still, Ha Ru has no idea about who this man is. He tells him that he is not making any sense to him and that he should leave and never come back. Later, Hee Ok meets Park Ki Tae with fake proof stating Gwang Nam is Ha Ru’s father.

The ‘Love Twist’ Episode 23 release date is 12th January 2021. In the upcoming episode, Hee Ok threatened Park Ki Tae to stay away from her and Ha Ru. If he ever comes back he will have to suffer the consequences. Kyung Joon proposes Doo Hee in a cafe and they get engaged. While everything is going smoothly, Gwang Nam is still skeptical if he should be involved in Hee Ok’s matter. He agrees to love Hee Ok but does not want to leave Ok Hee either.

Where To Watch ‘Love Twist’ Episode 23?

The South Korean drama ‘Love Twist’ is a television series broadcast by the KBS2 network. People living in South Korea can watch the upcoming episodes of ‘Love Twsit’ on the official network. As for international fans, they can watch the ‘Love Twist’ episode 23 on the subscription-based website Rakuten Viki.