Even after Gwang Nam's warning, Ha Ru decides to stay and run his company with So Ri. Also, he confesses his feelings for her. 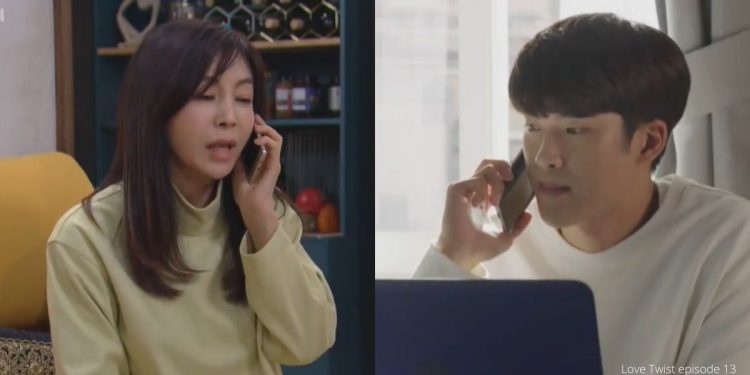 Ha Ru decides to stay back in South Korea and continue running Twist with So Ri. His decision is highly affected by how he feels about her. After so many years, he finally confesses his feelings for So Ri and she is relieved by it. Later, when Yoon-ah finds out about this she is very hurt and does not want to give up on Ha Ru. However, in ‘Love Twist’ Episode 13 she will be removed from the Twist company.

Also, Kyung Joon’s parents find out that Gwang Nam has given their son a driver’s job. This makes Mi Ja very angry, but she is reassured about her son’s future when Ok Hee makes a promise to her. Later, when Kyung Joon is showing his father the car he drives, he mistakenly puts on the last location Gwang Nam went to. Because of this, Kyung Joon’s father finds out about the place where Hee Ok is living.

Till we have seen that So Ri is hurt by Ha Ru leaving her again. Before this, he left her when he decided to move out of her house once he turned of age. Now that he has an opportunity to go to the U.S to work, it seems he is leaving So Ri again. However, both of them are not looking forward to closing down their company. Even though So Ri gets an ultimatum from her father, she does not want to make a decision. Because of this, a lot of people think that So Ri and Ha Ru are lying about closing down Twist.

Gwang Nam hates Ha Ru, and he is very disappointed to know that he has been lying to everyone. He warns him to stay away from his daughter, but in the end, Ha Ru decides to stay back. The next day, he tells his decision to So Ri, and this makes her cry happy tears. While So Ri is hugging Ha Ru, Kyung Joon is spying on them from far. As he is leaving, he meets Yoon-ah and tells her that So Ri is here to meet Ha Ru. When they face each other at the office, So Ri asks Yoon-ah to leave her company.

Ha Ru Is Not Going To The U.S

After seeing Yoon-ah get worked up about forfeiting her shares in Twist, Ha Ru takes her out to talk. He informs her that he is not going to work in Silicon Valley. This is because he decides to continue working on the company with So Ri. Finally, letting out his true emotions, Ha Ru confesses that he likes So Ri. No matter how much he tries to convince Yoon-ah to not like him, she stays put on her decision and believes that Ha Ru is her destiny. What will happen when Gwang Nam finds out about Ha Ru’s feelings for So Ri?

Mi Ja finds out about her son working as a driver for Gwang Nam. When Ok Hee finds out about this, she goes to console Mi Ja and give her assurance that her husband has a plan for Kyung Joon. Although Mi Ja does not trust Gwang Nam, she decides to trust her friend. After this, we find out that Ok Hee is determined to split Hee Ok and the man she is dating. She believes that Hee Ok’s choice of men is very poor, and she will need her help to get out of a bad situation.

The ‘Love Twist’ Episode 13 release date is 29th December 2021. Ok Hee is being extremely protective of Hee Ok. She calls Ha Ru and asks him to find out where his mother is moving. However, when Ha Ru calls Hee Ok, she yells at him, presuming that Ok Hee is behind this call. Also, Kyung Joon’s father finds out that Hee Ok is living at one of Gwang Nam’s apartments.

Where To Watch ‘Love Twist’ Episode 13?