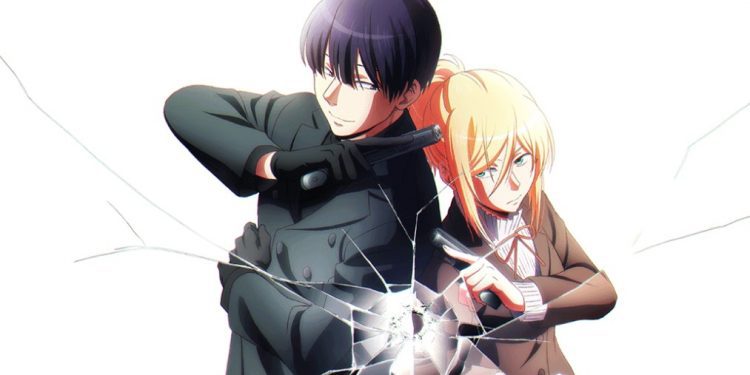 Love of Kill Episode 1 is set for this coming week after announcing its debut last year. Love of Kill Anime adaptation was revealed year in December and set to premiere as early as January 2022. The key visual for the manga adaptation was also released. The series is about two assassins who fall in love durion the assassination mission.  Love of Kill is also knowns as Koroshi Ai; this anime has suspenseful action romance. Platinum Vision and Hideaki Oba animated Love of Kill, and Hideaki Oba director the series.

The manga has released more than ten volumes. Love of Kill will be joining other animes released early this month. The lovers head on different missions and have love at first sight when they meet. Ryang-Ha and the excellent bounty hunter Chateau met at the workplace, but they never thought they could fall in love. The pure love turns into hatred during the mission since they become enemies. They had a massive fight, but they never stopped following each other since they wanted to make sure that each of them was safe.

Ryang-Ha knows that Chateau will always follow her everywhere. But that lead Ryang-Ha in trouble with the mysterious. He was tasked with watching over Chateau as his new mission. They know that they once met in the past and that memory always haunts them in the future. Chateau and Ryang know each other’s secrets, but their love makes them stops them from exposing each other. Despite protecting each other unknowing, they know that they love each other. Their new journey became clear, but they also bumped with different obstacles.

The story between Chateau and Ryang is of a cat and mouse, but they vow to complete their mission no matter what happens. This takes place around female bounty hunter Chateau Dunkworth working with a hitman Son Ryang-ha who loves to spy on her. Even though it was part of his mission, he knows that doing that will get closer to her and always make sure she is protected. On her mission, Chateau bumps with a pro hitman, Son Ryang-Ha. Son Rhyang-Ha wanted her to tell him information since it was essential for his mission. But she was tricky for him, and he suggested going on a date with her.

Son Rhyang-Ha and Chateau Dunkworth went on a date in the evening, but she refused to tell him the information since she felt she could break her work code. But Rhyang-Ha didn’t give up and continues to follow her while protecting her despite the rejection. He knows that he once met Chateau, and another threat appears in their life; Donal Bachman targets the two and forces them to experience their past. Chateau is a Noble from a respected family, and Son Rhyang-Ha received an order to protect the noble daughter.

One day, a war broke out, and Chateau got injured during gun firing, but he protected her. Rhyang-Hang saves Chateau. Rhyang-Hang is famous for taking down the Hong Kong triads alone. Twenty organizations head out, searching for his head. Euripedes Ritzlan also join Chateau, and Rhyang-Ha. All the time, when Chateau and Rhyang get in trouble, one of them protects each other. Chateau and Rhyang continue with completing the bounty missions. They learn the mystery behind the organization and after them and Donal Bachman, who wants to see them dead since they might be an obstacle in the future.

Love of Kill Episode 1 will be released on 12 January 2022. The love story between bounty hunter Chateau Dunkworth working and a hitman Son Ryang-ha has recently begun. The two have many missions that await them. But they are also ready to reunite. Let’s look at Love of Kill Episode 1 official details.

Also Read: Kagame Enters The Virtual World In She Professed Herself Pupil of the Wise Man Episode 1.