‘Love Catcher in Seoul’ Episode 7: Is Haneul Moving on? 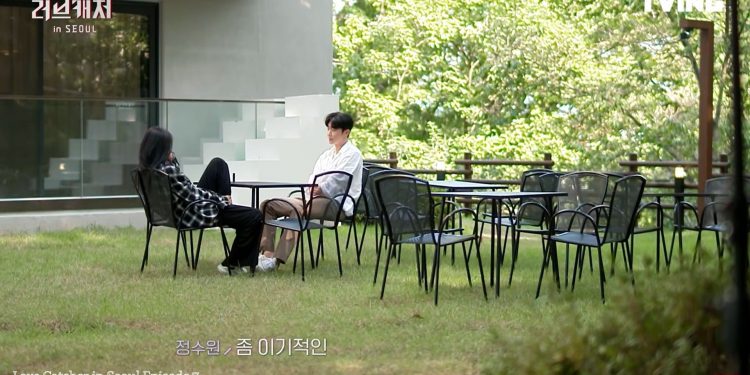 The dating psychological game ‘Love Catcher in Seoul’ is going to air its seventh episode real soon. The show has intrigued thousand of viewers and all of them are loving the show a lot. It is fairly visible from all the positive reviews and ratings it is receiving. The participants of the show have also successfully won everyone’s heart and their engagement.

Moreover, the show has successfully attracted the attention of many viewers out there who are deeply invested in the genre of reality shows. Audiences out there are really enjoying the interesting build-up of the show and also the participants inside it. The developing chemistry between them is getting enhanced with each new episode and the whole internet is flooded with the same.

With this upcoming seventh episode, the show has reached its final stage and will big goodbye to us very soon. It won’t be wrong to say that this psychological dating game has won the hearts of not only the young generation but also the older ones.

Here we have summarized all the details about the upcoming seventh episode of the show. Therefore, let’s have a peek inside.

‘Love Catcher in Seoul’ Episode 7: When Is the Release Happening?

‘Love Catcher in Seoul’ Episode 7 will air on December 31, 2021, at 12:30 PM. The reality show is doing fairly well on all the grounds and the viewers out there are really eager to know the events ahead in the future. There are many endless assumptions floating around the internet about the upcoming episodes of the show and the growing chemistry between the participants of the show. Moreover, the series has stolen the spotlight with its very engaging suspense creation. Every new episode brings in some really interesting trope that leaves all the audiences out there in a vibrating mode.

Social media platforms are stacked up with all the fan-made edits and theories. The show is really receiving huge attention from all the viewers in the Asian arena and also some of them who are beyond the boundary. Therefore, it is going to be really interesting to witness their reaction to the upcoming events ahead.

ALSO READ: Has Jang Ki Yong Already Given Up On Song Hye Kyo In Now We’re Breaking Up Episode 13?

‘Love Catcher in Seoul’ Episode 7: Where to Watch?

Talking about the streaming platforms for the reality show, there are limited options available outside. It will take you a bit of effort. If you are a lucky one falling under the domestic category then it is going to be fairly easy for you to find a reliable platform for the streaming part. TVING is the choice for you. Though, if you fall under the category of the international audience then a bit of surfing on the internet will be very helpful.

In the previous episodes, the thick atmosphere between Haneul and Soo Won has not cleared. Not even by a bit. If something has improved then only the tension between them. All thanks to their mutual confusion and misunderstandings that have led them to this point.

To sum up there’s a lot happening inside the show and all the participants are trying to get to their desired ones. Viewers out there are rooting for the same and we are also waiting for the same.

There is a strange growing closeness between Haneul and Jimin. Everyone there is quite worried about the same as it is going to be very confusing for both the viewers and judges. So Won has not stopped taking subtle glances at both of them and that has added fuel to the already blown up fire of miscommunication between them.

Meanwhile, all the judges out there are continuously worried about Haneul’s decision about going out with Jimin. But we see the situation taking a turn when Jimin confesses to Haneul that he has received a proposal for a date. A REAL one this time. Also, we see Jimin going on his date and he looks really invested in the same. All the pairs out there are moving forward with their desired ones and the “date part” has managed to intrigue all the audience out there.

In the upcoming episodes, we might see some growing connection between Haneul and So Won and also the improving relations between the other pairs.

Will We Meet Hira And Kiyoi In ‘Utsukushii Kare’ Season 2?