What was the ending of Look Away? Look Away, released on 12 October 2018, is a psycho-horror slasher that tells the story of a young Schoolgirl, Maria. Her life turned upside down when she switches places with her mirror image. Assay Bernstein tries to reinvigorate the style with a unique take over on an old storyline. Look Away is a story of an alienated high school girl who is depressed and unhappy with her current ongoing life. In school, she is bullied by her classmate Mark, and at home, there is no one to hear her. Her distant father, Dan, who is a plastic surgeon, always seems to weigh in on her physical appearance. This made her so depressed that she started doing some irrational things like losing weight, even though she was already thin. Dealing with so many traumas, it became too unbearable for her to deal with pain.

However, her mother, Amy, tries to help her, but she has her demon to deal with. Her mother suffers from depression and nightmares. The movie is a true depiction of ‘when your anger and pain conquered you, it will always lead to the downfall. The following article contains the storyline and ending of Look Away. Firstly, we will talk about the plot and story of the movie. Thereafter the ending of the movie is explained. 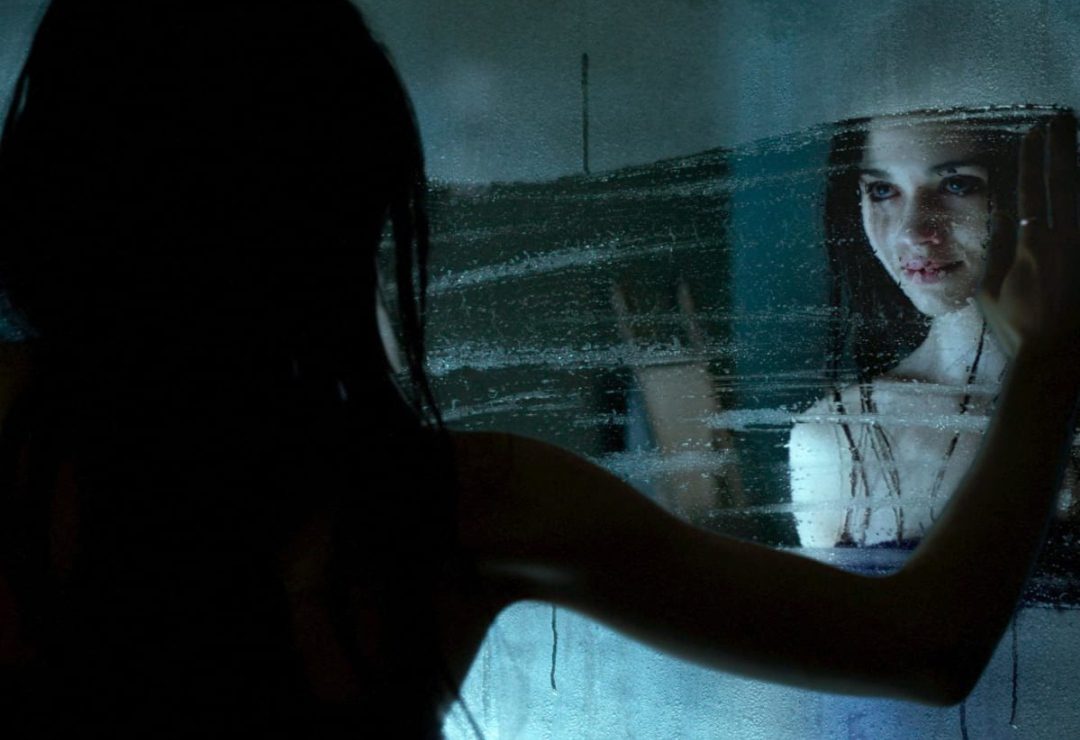 Maria talking to her mirror reflection image Airam (Look Away)

All About The Movie, Look Away

An 18-year-old girl, Maria Brennan, who is depressed from her life, discovers a sonogram of her twin in the mirror. Afterward, she dreams of her birth, and the next morning her reflection in the mirror starts talking to her, calling herself Airam. Airam is Maria’s twin but more charismatic, assertive, and beautiful than her. As the story moves further, a series of tragedies befall her. Maria’s father, Dan, told her that he’d be performing plastic surgery on her to fix the flaws which she has, according to him. Crushed by the incident, she finds solace in her reflection’s presence. Moreover, Aiman tried to confront her and told her that she could take her sadness away.

Maria’s only friend Lily abandoned her after she slips on the ice while practicing ice-skating for the prom. Well, this was not enough, then Mark humiliated and assaulted her at the prom. Devasted Maria finally allows Airam to switch places. Now Airam took Maria’s place, and Maria is at Airam’s place. Airam taught a lesson to both Maria’s so-called friend and Enemy, Lily and Mark. She lures Mark and Breaks his legs. Moreover, after practicing figure skating secretly, she chases Lily across the ice, and Lily falls onto the pavement. In addition to that, Airam seduced Maria’s crush Sean and took him to a motel, but unfortunately, she hit him over with a bottle and killed him.

Also Read:   Exception Ending Explained: What Happened To Mieke At The End Of The War Flick?

As the story proceeds, it was revealed that Amy had twin daughters, who were euthanized by Dan due to her supposed physical deformities. Airam left the motel and went to Dan’s clinic to confront him. She demanded him to answer her whether ‘he would have still loved her if she was deformed,’ to which he answers ‘yes,’ but she slits his throat and killed him.

At the ending of Look Away, Airam could no longer see Maria’s reflection in the mirror, and sadly she returned home. The final shot depicts Maria and Airam laying on the bed beside their mother, Amy, a perfect family reunion, where they both reunited as one.

Also Read: Does Na-bi End Up With Jae-eon? All About Nevertheless K-Drama

All About the Cast of the Movie

The protagonist’s character was portrayed by India Eisley, whom we have already seen in ‘Headspace’ and ‘My sweet Audrina.’The movie has a strong cast, and everyone played their characters beautifully. From Jason Issac, who played the character of Dan, to Mira Sorvino as Amy, all were amazing.

India Eisley as Maria in Look Away